REVIEW: Diva-Worthy Rendition of Hedwig And The Angry Inch A Must See

HEDWIG AND THE ANGRY INCH
will play a limited two-week engagement through March 19, 2017.

Broadway In Chicago is pleased to announce the 2014 Tony Award-winning Best Musical Revival HEDWIG AND THE ANGRY INCH now playing at the Oriental Theatre
(24 W Randolph). 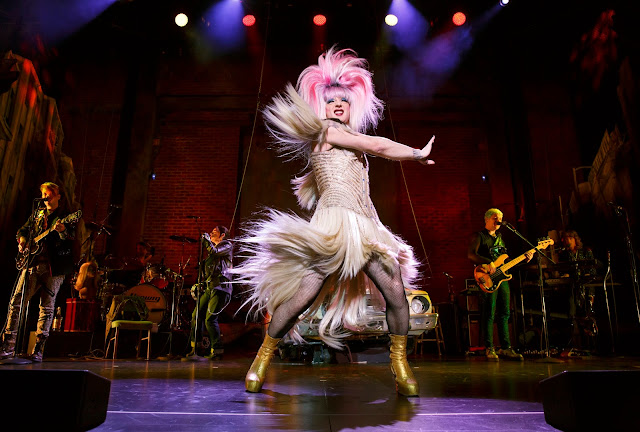 Euan Morton (Hedwig) IS a rock star. Hannah Corneau (Yitzhak) is also amazing, and her solos are a treat. Stellar show!! Don't miss this. Highly recommended.

Here at ChiIL Live Shows, it was our great pleasure to catch the press opening of HEDWIG AND THE ANGRY INCH at Chicago's iconic Oriental Theatre Wednesday night. I'd read the book, but never seen Hedwig performed, so this was truly a treat. The Broadway version doesn't come off as darkly disturbing as the novel. Diva-worthy transexual, Hedwig, is such a huge presence, and the loud score is so upbeat, accompanied by strobe lights, that much of the audience seemed to be swept up in rock concert mode, having so much fun that the truly horrific backstory doesn't fully seep in until later.

This saga begins as a patriotic tale of a young, blond haired, blue eyed Aryan boy in East Berlin, obsessed with American pop culture and music, with his head in the oven to hear his portable radio acoustics better. This child, the abandoned son of an American soldier, should have been able to emigrate by nature of his parentage. Yet, he was coerced into an unwanted sex change operation by a predatory older American military man who seduced him into believing the only way out from behind the wall was marriage to him. The surgery was botched, and later Hedwig found herself living alone in a US trailor park near an army base, after her husband ran off with another young boy. A year later, the wall was torn down, but Hedwig was left permanently neutered and disfigured for her hard won freedom, and turning tricks to survive.

The next stage is a conservative's worst nightmare. Hedwig begins to babysit on the base and falls for and seduces the General's underage son away from church and heterosexuality and into the lifestyle of a platinum winning musician. When the rock star takes her music and her heart and abandons her, she marries again, not for love, but to rescue a young Jewish drag queen from the dregs of his existence, so he can emigrate. He becomes her emotional whipping boy until she comes to grips with her past and matures into a more compassionate being, passing the torch of performing in full Hedwig garb to him. 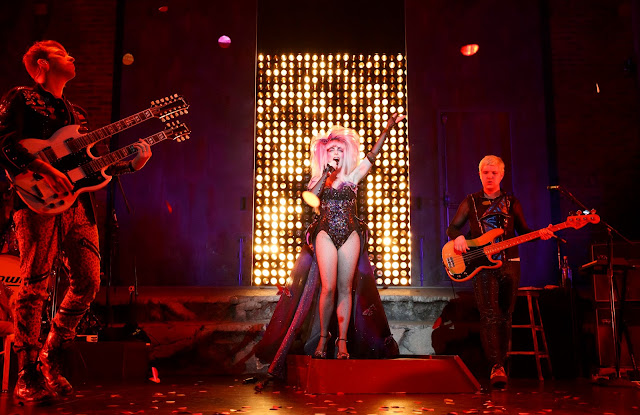 Ultimately this is a universally human tale of love and loss, betrayal and beauty that transcends the details and makes Hedwig a beloved, sympathetic character. We adore this survivors tale, of immense talent, drive, determination and perseverance in the face of wrenching betrayals. Hedwig's physical and emotional transformation from bitch diva to stripped down man (literally and figuratively) is powerful stuff!

We loved the incredibly talented cast, over the top wigs and costumes, large screen special effects, and the fantastic score. The set design details were superb, even down to the Hurt Locker Playbills strategically scattered throughout the auditorium. Do note, you may be playfully molested a bit if you have front row seats! 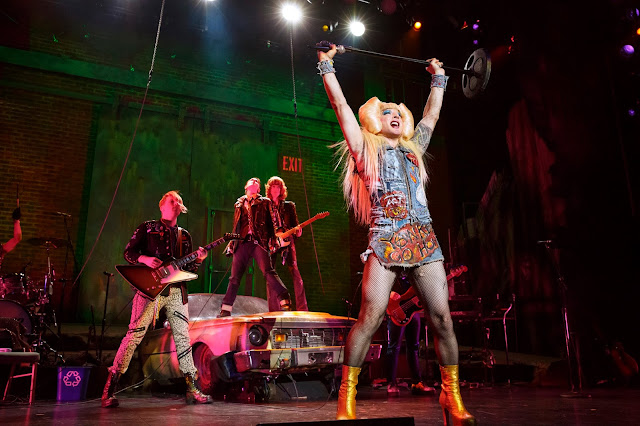 Brilliantly innovative, heartbreaking, and wickedly funny, HEDWIG AND THE ANGRY INCH is the landmark musical by John Cameron Mitchell and Stephen Trask that is “groundbreaking and ahead of its time” (Entertainment Weekly). This gender-bending, fourth-wall-smashing musical sensation, with a pulsing score and electrifying performances, tells the story of one of the most unique characters to ever hit the stage. It’s about finding your other half; it’s the story of the origin of love.

Directed by Tony Award-winner Michael Mayer (Spring Awakening, American Idiot) and starring Tony and Olivier Award-nominee Euan Morton, HEDWIG AND THE ANGRY INCH is the winner of four 2014 Tony Awards including Best Musical Revival. It played to record-breaking sell-out crowds on Broadway and promises to take Chicago by storm with what Rolling Stone proclaims is “the best rock musical ever!”

The Grammy nominated Original Broadway Cast Album for HEDWIG AND THE ANGRY INCH is available from Atlantic Records.

Tony and Olivier Award-nominated Euan Morton plays the role of Hedwig, and Hannah Corneau is making her Broadway National Tour debut as Yitzhak.
Euan Morton originated the role of Boy George in the musical Taboo in London and New York, garnering Tony and Olivier Award nominations and receiving the Theatre World Award for Outstanding Broadway Debut.  HEDWIG AND THE ANGRY INCH co-creator Stephen Trask gushes about why Euan is the perfect choice to fill Hedwig’s golden boots: “Euan’s Hedwig is going to be so exquisitely beautiful and achingly heartbreaking. What an emotional powerhouse. He is otherworldly.” 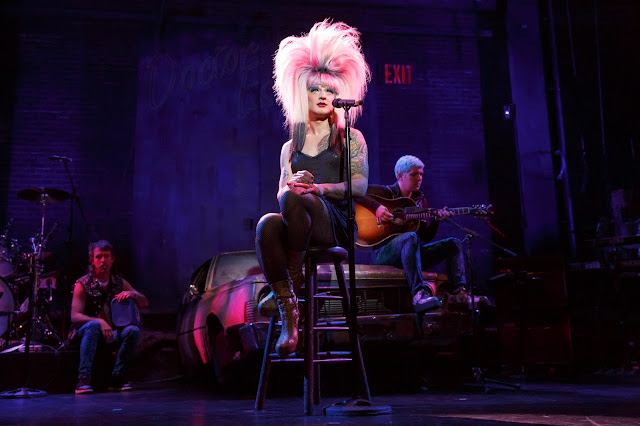 Morton is equally thrilled to play Hedwig: “I have been blessed in my career, but no blessing has been as exciting as the chance I've been given to take over the role of Hedwig. Joining the cast is the kind of challenge that an actor dreams of. I can't wait to slip into her golden boots and begin the transformation to cultural icon! And I'm so much better looking with sparkling eyes and a caking of LaVern Baker! All the more thrilling is that I'll have the honor of taking darling Hedwig all over the country. I'm ready for the ride of my life; I hope America is ready for her ride too.”

The members of Hedwig’s band “The Angry Inch” – aka “Tits of Clay” – will be music director Justin Craig (guitar and keyboards), Matt Duncan (bass), Tim Mislock (guitar), and Peter Yanowitz (drums), all of whom originated their roles on Broadway.

HEDWIG AND THE ANGRY INCH was originally produced Off-Off-Broadway at Westbeth and then, under the direction of Peter Askin, ran over two years at the Jane Street Theatre beginning in February 1998. The musical won the Outer Critics Circle Award for Best Off-Broadway Musical and both John Cameron Mitchell and Stephen Trask won Obies in 2001. It won a 1998 New York Magazine Award and Entertainment Weekly’s “Soundtrack of the Year” Award. Time Magazine named HEDWIG the Top Musical of 1998.

The film of HEDWIG AND THE ANGRY INCH, directed by John Cameron Mitchell, won the Audience Award and Best Director Awards at Sundance. Mitchell won the Best New Director from the National Board of Review, the Gotham Awards, and the LA Critics Society. Stage productions have played for many years in Japan and in 2008, Korea hosted a popular televised reality show about the search for a new star to play Hedwig.

BIOGRAPHIES
EUAN MORTON (Hedwig) originated the role of Boy George in the musical Taboo in London and New York. He was nominated for an Olivier and a Tony Award. In addition, he received a Theatre World Award for Outstanding Broadway Debut. Additional Broadway credits include Cyrano de Bergerac and Sondheim on Sondheim. He has numerous Off- Broadway and regional credits, including a production of Measure for Pleasure at the Public Theatre that earned him an Obie Award, and Parade at the Ford’s Theatre as Leo, for which he won a Helen Hayes Award. A favorite recent collaboration was with Tony Kushner and Maurice Sendak on the new musical Brundibar. Euan also has an active concert career. He's released two solo albums and has had the pleasure of singing in many of the best concert venues around the country. Euan feels very lucky to be on the journey. For a more detailed look at his work, check out www.euanmorton.com
MASON ALEXANDER PARK (Hedwig Standby) is thrilled to work on his dream show with such an incredible team. Theater: Altar Boyz (Mark), The Drowsy Chaperone (Man in Chair), Rocky Horror (Frank N. Furter), Mary Poppins (first countertenor to play Miss Andrew). TV/film: “iCarly,” “Bucket and Skinner’s Epic Adventures,” (Nickelodeon) “Broadway or Bust,” “Becoming an Artist” (PBS). masonapark.com.
SHANNON CONLEY (Yitzhak Standby). Broadway: Hedwig and the Angry Inch. Lead singer of the all-female rock band Lez Zeppelin (lezzeppelin.com). Voice of several cartoon characters on “Pokémon,” “X-Men,” Nickelodeon, Cartoon Network, Star Kidz network. On-camera roles include “L&O: SVU,” “A.B.E.,” “Fugue” and the “Downsized” webseries. More info and heartfelt thank yous at shannonconley.com
MATT DUNCAN (Bass, guitar, keyboard, voacals). Matt Duncan is a singer/songwriter, producer and bass player from Lexington, Ky. Although he’s best known for his smooth, slightly skewed take on classic R&B, he got his start in the community center basements of DIY punk.
TIM MISLOCK (Guitar, vocals). Tim Mislock made his Broadway debut in Hedwig. For the past several years, Tim has recorded and toured with indie rock bands The Antlers and Holly Miranda. This fall he will release his first solo record, Now Is the Last Best Time. He thanks his wife, family and friends for their endless support. @timmymislock
PETER YANOWITZ (Drums, vocals). Peter Yanowitz was a founding member of both the Wallflowers (Virgin) and Morningwood (Capitol). Other artists he has recorded/performed with include Natalie Merchant, Wilco, Yoko Ono, Allen Ginsberg, Nina Nastasia, Money Mark and Ryan Jarman. With Stephen Trask, Yanowitz is currently writing music and lyrics for the upcoming Broadway musical This Ain’t No Disco!
JUSTIN CRAIG (Guitar, keyboards, vocals) Justin Craig is a Grammy-nominated record producer, multi- instrumentalist, composer and music director based in Brooklyn, N.Y. He’s honored to be in the Angry Inch. Justincraigmusic.com.
HANNAH CORNEAU (Yitzhak). Off-Broadway: Daddy Long Legs (Davenport Theatre); Ethel Sings (Beckett). Regional: Evita (Marriott Theatre); Fiddler on the Roof (Arena Stage); Harmony (Alliance/Ahmanson; Ovation Nomination).Chicago: Les Misérables (Paramount Theatre; Jeff Award); Bloody Bloody Andrew Jackson (Bailiwick Chicago); A Little Night Music (Writers Theatre). Hannah is also a proud member of RANGE a cappella. Endless thanks to her amazing family. @hannahcorneau 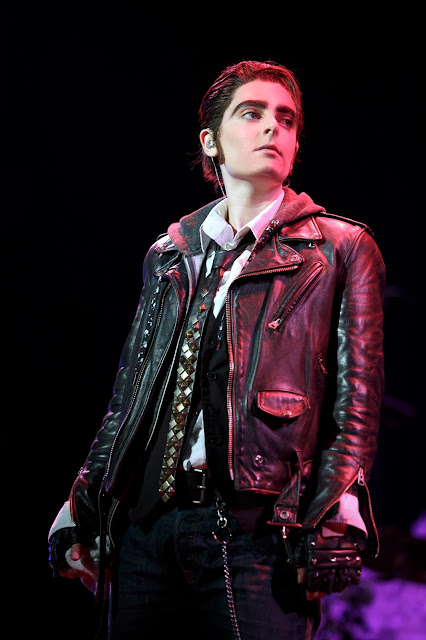 ABOUT BROADWAY IN CHICAGO
Broadway In Chicago was created in July 2000 and over the past 17 years has grown to be one of the largest commercial touring homes in the country.  A Nederlander Presentation, Broadway In Chicago lights up the Chicago Theater District entertaining well up to 1.7 million people annually in five theatres.  Broadway In Chicago presents a full range of entertainment, including musicals and plays, on the stages of five of the finest theatres in Chicago’s Loop including The PrivateBank Theatre, Oriental Theatre, Cadillac Palace Theatre, and just off the Magnificent Mile, the Broadway Playhouse at Water Tower Place and presenting Broadway shows at The Auditorium Theatre of Roosevelt University. Email ThisBlogThis!Share to TwitterShare to FacebookShare to Pinterest
Labels: Broadway in Chicago, Hedwig and the Angry Inch, highly recommended, review, shows on our radar, Theatre Chicago