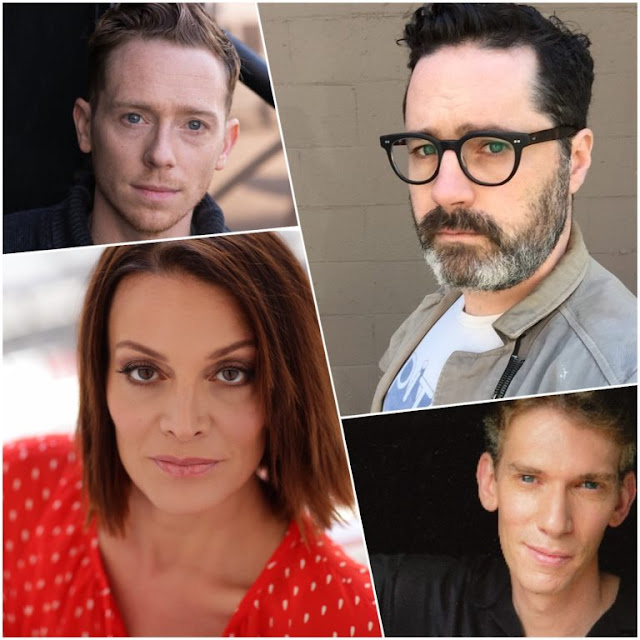 A Red Orchid Theatre concludes its 2016-2017 Season with the Chicago premiere of 3C, written by David Adjmi and directed by Ensemble Member Shade Murray. The production runs April 20 – June 4, 2017, at A Red Orchid Theatre, 1531 N. Wells.

Inspired by 70’s sitcoms and the political incorrectness of "jiggle television," 3C is a hilarious and horrifying look at identity and what lies beneath the homogeneous perky veneer. Brad lands in L.A. to start a new life. A wild night of partying finds him passed out in Connie and Linda’s kitchen and the three strike a deal that raises the suspicions of the landlords. Complications spiral out of control, taking the show from farce to something... unexpected.

“We could use a good laugh, an out-loud, roll-on-the floor, cringe-worthy, ugly-cry laugh,” notes Artistic Director Kirsten Fitzgerald.  “3C certainly brings that to the room along with much, much more. I am beyond thrilled to get to know David and for our artists and audiences alike to mine the deepest and darkest of identity questions both personal and public. Director Shade Murray has a knack for finding the hilarity in the darkest of interactions. I cannot wait to have them in the same room exploring and sharing the world and words with all.”

David Adjmi (Playwright) was called "virtuosic" by the New York Times, one of the "best and most original theatre artists of a generation" by Vogue, and one of the Top Ten in Culture by The New Yorker magazine.3C received its world premiere at Rattlestick Playwrights Theater (with Rising Phoenix and Piece by Piece Productions) in June 2012, and was dubbed "revelatory" by the Times and “the most divisive and controversial play of the season” by the New York Post. 3C was selected as one of the top ten plays of 2012 by the Post, Time Out New York and the Advocate.  His other plays include Marie Antoinette (A.R.T. & Yale Rep, Soho Rep, Steppenwolf, Woolly Mammoth and more), Elective Affinities (Royal Shakespeare Company, Soho Rep with Rising Phoenix & Piece by Piece Productions), Stunning (LCT3/Lincoln Center Theater, Woolly Mammoth Theatre Company), The Evildoers (Sundance, Yale Repertory Theatre), Caligula (Soho Rep Studio Series), and Strange Attractors (Empty Space).  David was awarded a Mellon Foundation Playwrights Residency, the Guggenheim Fellowship, the Whiting Writers’ Award, the Kesselring Prize for Drama, the Steinberg Playwright Award (the “Mimi”), McKnight and Jerome fellowships, the Helen Merrill Award, the Marian Seldes-Garson Kanin Fellowship, the Fadiman Prize and the Bush Artists Fellowship, among others.  A collection of David’s work, Stunning and Other Plays, is published by TCG, and his work is included in The Methuen Drama Book of New American Plays. His memoir SAVE US, SUPERMAN! is forthcoming from HarperCollins as is a second collection of plays entitled 1789 / 1978.

Shade Murray (Director) is an ensemble member of A Red Orchid Theater, where he has directed the world premieres of Brett Neveu’s Pilgrim’s Progress and Ike Holter’s Sender, as well as productions of Marisa Wegrzyn’s Mud Blue Sky and The Butcher of Baraboo, Annie Baker’s The Aliens, Nick Jones’ Trevor, Mike Leigh’s Abigail’s Party and Kimberly Akimbo by David Lindsay-Abaire.  He also performed in the A Red Orchid production of The Mutilated.  Other directing credits include Steppenwolf Theatre Company, The House Theater, Steep Theater, Second City, Writers’ Theater and elsewhere.  Shade is a lecturer at University of Chicago and teaches at DePaul University and Actors’ Studio Chicago.

Jennifer Engstrom (Mrs. Wicker) returns to A Red Orchid Theatre in 3C. An ensemble member since 2003, Jennifer was most recently seen in AROT's The Mutilated, garnering a Jeff nomination for Outstanding Actress. Other Orchid productions include: Eric LaRue, The Fastest Clock In The Universe, The Hothouse, Weapons of Mass Impact, Fatboy, and Simpatico. Other credits include A Streetcar Named Desire, Death Of A Streetcar named Virginia Woolf (Writers Theatre); Sweet Bird Of Youth (The Goodman Theatre); One Flew Over The Cuckoo's Nest, The North Plan (Steppenwolf Theatre); Skygirls (Northlight); The Incident, Are You Now Or Have You Ever Been...(Next Theatre); MacBeth (Notre Dame Shakespeare); Angels In America (Kansas City Rep).  This summer Jennifer will fill in for the mighty Amy Morton in Steppenwolf's Hir. Jennifer will be seen in the upcoming film Slice starring Chance The Rapper.

Steve Haggard (Terry) was last seen at A Red Orchid in Sender and The Mutilated. He has been an ensemble member since 2007. Other Orchid shows include Accidentally Like A Martyr, The Aliens, Kimberly Akimbo and The Mandrake. Chicago credits: Tribes (Steppenwolf); Funnyman and Season’s Greetings (Northlight); Doubt, Old Glory, The Subject Was Roses and Our Town (Writers); Wasteland (Timeline); King Lear, As You Like It and Romeo and Juliet (Chicago Shakespeare). Regional Credits: R+ G are Dead, Two Gentlemen of Verona, The Tempest, Hay Fever, Comedy of Errors and Ah Wilderness (American Players Theatre), Almost Maine (Milwaukee Repertory) and Fallen Angels (Indiana Repertory). Steve is a graduate of The Theatre School at DePaul University.

Sigrid Sutter (Connie) makes her debut at A Red Orchid Theatre. In Chicago she’s worked with Northlight Theatre, Steep Theatre, Jackalope Theatre, Teatro Vista, Sideshow Theatre, Back Room Shakespeare Project, and others. Her film credits include Colma: The Musical and Strange Culture; her television credits include Chicago Justice and Ellen. She is represented by Actors Talent Group.

Email ThisBlogThis!Share to TwitterShare to FacebookShare to Pinterest
Labels: A Red Orchid Theatre, Chicago premiere, opening, shows on our radar