ACT OUT EXTENDED: TO MASTER THE ART at Broadway Playhouse #BroadwayInChicago 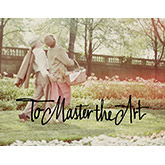 Broadway In Chicago is thrilled to announce that TO MASTER THE ART, by William Brown and Doug Frew, has been extended by popular demand  and will play an additional two weeks at the Broadway Playhouse at Water Tower Place (175 E. Chestnut). The six week engagement will begin Sep. 10 and run through Oct. 20, 2013.  The Chicago Commercial Collective will produce the 2010 TimeLine Theatre world premiere hit.

Commissioned by TimeLine Theatre Company, TO MASTER THE ART received its world premiere at TimeLine in 2010, receiving more than 20 rave reviews and five Jeff Award nominations, including New Work and Production.  The play recalls the adventure and romance of Julia and Paul Child’s journey of discovery to Paris during the 1950s.  From the bistro where Julia fell in love with food, to the kitchen table where she recreated everything learned during cooking class, to a room where Paul was grilled by U.S. agents about alleged Communist contact, this is the epic love story of a larger-than-life culinary icon and her remarkable husband as they struggle to find themselves as Americans abroad.

Broadway In Chicago is proud to host this great Chicago-born play as part of its ongoing hope that the Broadway Playhouse will continue to be the home to many home-grown Chicago theatre hits.

About the Chicago Commercial Collective
Chicago Commercial Collective is a commercial theatre company focused on producing Chicago theatre of incredible quality and commercial appeal thereby supporting Chicago’s vital non-profit theatre scene. The goal is to manifest a thriving small and mid-sized commercial theatre scene. Our community has a multitude of available venues, and more are being built every day. The Collective will focus on producing theatre with proven popularity, building upon the interest already generated from their original production runs.. For our investors, we will provide opportunities to partner on exciting projects with reasonable returns on their investments. Chicago Commercial Collective wants to help Chicagoans discover the best of its city’s vibrant theatre scene by showcasing the biggest hits in town. The Collective allows non-profit theatre companies to enjoy the benefits from their original successful productions that may end prematurely. Finally, artists who doubt Chicago’s job market will provide consistency with fair wages can rely on the Collective to change the scene with the development of midsized commercial theatre. We propose a new era in Chicago Theatre.

Email ThisBlogThis!Share to TwitterShare to FacebookShare to Pinterest
Labels: Act Out, Broadway in Chicago, Broadway Playhouse, extended, TO MASTER THE ART