ChiIL Live Shows on our radar
League of Chicago Theatres, in partnership with Choose Chicago, 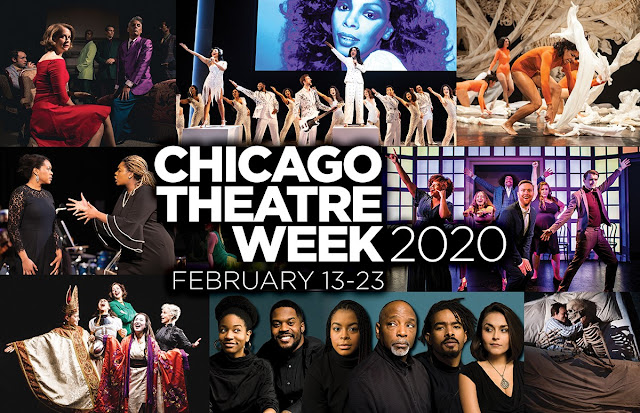 Chicago Theatre Week (#CTW20), an annual celebration of the rich tradition of theatre-going in Chicago during which visitors and residents can access value-priced tickets, will take place

February 13-23, 2020. From joy to heartache and every feeling in between, Chicago theatre tells stories that evoke big emotions. Stories that take risks, inspire awe, ask tough questions – and dare audiences to do the same. From musicals to plays to comedy, theatre is for everyone in Chicago. Chicago Theatre Week is a celebration of the stories we share.

Chicago Theatre Week, spanning a week and two full weekends, is heading into its eighth year. As a program of the League of Chicago Theatres, in partnership with Choose Chicago, over 100 theatre productions are expected to participate in neighborhoods throughout the city and suburbs.

The value-priced CTW tickets will be $30, $15, or less. In early January 2020, tickets will go on sale and a list of participating productions will be available at ChicagoTheatreWeek.com.

A small sample of the many productions expected to participate are:

Last year, in February 2019, 139 participating productions offered value-priced tickets to 593 individual performances during Chicago Theatre Week. The initiative continues to see increased sales year over year, with 12,700 Theatre Week tickets sold in 2019. Chicago Theatre Week brings in new audiences to area theatres with an average of 63% of attendees visiting their chosen theatre for the first time. Theatre Week also proved to be a draw for visitors from outside Chicago with 17% of patrons coming from beyond 50 miles of the city, spanning 36 states and several countries.

“Each year, Chicago Theatre Week introduces audiences to incredible shows at great prices. It presents an opportunity for every visitor and every resident to experience new work, fresh talent, musicals, improv, and more,” comments Deb Clapp, Executive Director of the League of Chicago Theatres. “Theatre is something that sets Chicago apart from other cities and Chicago Theatre Week celebrates that distinction and welcomes everyone in.”

“Chicago, which is home to over 250 dynamic theatres, provides visitors more variety and creative platforms than any destination in the United States,” said David Whitaker, President and CEO of Choose Chicago. “Perhaps more importantly, Chicago Theatre Week helps create a greater understanding of the year-round programming, opportunities and the amazing venues that call Chicago home.”

About Chicago theatre
Chicago theatre is the leader in the U.S. with more than 250 theatres throughout Chicagoland, comprising a rich and varied community ranging from storefront, non-union theatres to the most renowned resident theatres in the country, including 5 which have been honored with Regional Tony Awards, and the largest touring Broadway organization in the nation. Chicago’s theatres serve 5 million audience members annually and have a combined budget of more than $250 million. Chicago produces and/or presents more world premieres annually than any other city in the nation. Last year alone Chicago theatre companies produced more than 100 world premiere productions and adaptations. Each year Chicago theatres send new work to resident theatres across the country, to Broadway, and around the world.

League of Chicago Theatres’ Mission Statement
Theatre is essential to the life of a great city and to its citizens. The League of Chicago Theatres is an alliance of theatres which leverages its collective strength to support, promote, and advocate for Chicago’s theatre industry. Through our work, we ensure that theatre continues to thrive in our city.