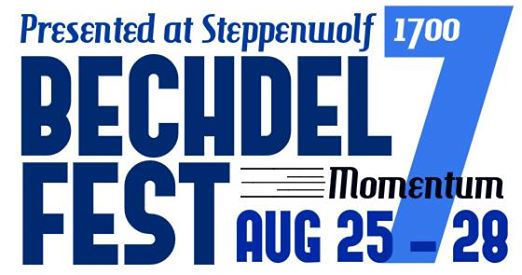 I caught BECHDEL FEST for the first time last year, and it was amazing. For years, I've been a big fan of applying the Bechdel-Wallace Test to film, theatre and other written works. It's a simple formula that seems like a no brainer, yet somehow in 2019, the idea of female centered works STILL remains a rare and elusive achievement. This annual fest tips those scales a bit further toward something like equality. Created by cartoonist Alison Bechdel, the test asks whether a work of entertainment features at least two women in conversation about something other than a man. Check it out. 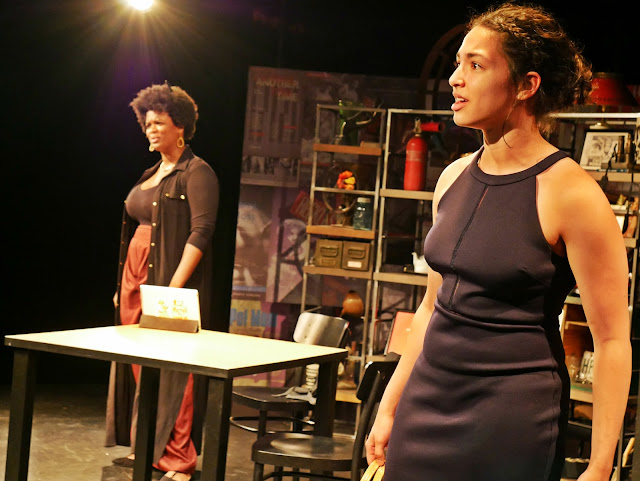 (left to right) Taylor Raye and Sophie Hoyt in FOR THE CULTURE, part of Broken Nose Theatre’s BECHDEL FEST 2018. Photo by Spenser Davis.

Broken Nose Theatre is pleased to present BECHDEL FEST 7: MOMENTUM, the company’s annual festival of new short plays featuring an ensemble of female-identifying and non-binary actors talking about things other than men. Presented as part of Steppenwolf’s LookOut Series, BECHDEL FEST will play four performances only, August 25 – 28, 2019 at Steppenwolf’s 1700 Theatre, 1700 N. Halsted St. in Chicago. Tickets for all BNT productions are available on a “pay-what-you-can” basis, allowing patrons to set their own price and ensuring theatre remains economically accessible for all audiences. Suggested price is $25. Tickets are currently available at www.steppenwolf.org or by calling (312) 335-1650.

All the works in BNT’s perennial feminist festival are inspired by the famous Bechdel-Wallace Test. Since the fest's first iteration in 2013, Broken Nose has worked with some of the most exciting voices in the Chicago theater landscape on over 40 stories that, by design, do not revolve around men. This year's lineup includes both female-identifying and non-binary characters.

"Political primaries are kicking off on the national stage, the state of Illinois is embracing policies that look toward the future, the Chicago theatre community continues leading the charge to create a better environment for all its artists... and in all of this, we feel a certain sense of momentum, a sense that change is coming and coming fast," comments BNT artistic director Elise Marie Davis. "These nine short plays look at this same concept from a variety of angles. After selling out all three performances at last year's fest, we're thrilled that the Steppenwolf LookOut Series family is not only welcoming us back into their home, but also allowing us to add a fourth performance to account for demand. We cannot wait to be back at the 1700!” A first-year cadet at West Point decides to share some unexpected news with a military veteran - who also happens to be her mother.

The annual fundraising dinner for a prestigious all-girls school hits a major speed-bump when one of their "unsuccessful" alumni starts speaking her mind.

Five girls on a drum-line consider the terrifying future that awaits them if the current tempo of the nation keeps accelerating.

In the unforgiving world of stand-up comedy, two women look behind the jokes to explore what's really on each other's mind.

A concerned daughter follows her hydrologist mother north of the border in the wake of a family tragedy.

In a deep-South state where abortion has just been outlawed, the wife of a prominent politician seeks help from a woman who runs a clandestine health clinic.

A famed clairvoyant, who claims to speak to the dead, is confronted by a group of outspoken women who are not quite "True Believers."

Stationed along the conveyor belt at a recycling sorting center, three employees grapple with questions of idealism, reality, and planning for the future. 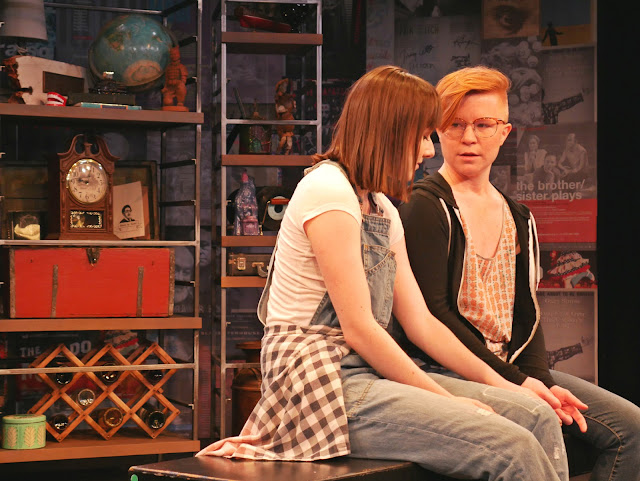 Broken Nose Theatre is a Pay-What-You-Can theatre company. Founded in 2012, BNT was last year's recipient of the Emerging Theater Award, presented by the League of Chicago Theatres and Broadway in Chicago. The company has produced and developed 15 full-length plays (including 8 Chicago or World Premieres) and over 40 new womencentric short plays through their annual Bechdel Fest. We strive to spark conversation, cultivate empathy, and amplify underrepresented voices, and are committed to making new, exciting and relevant theatre that is economically accessible to all audiences. For more information, please visit www.brokennosetheatre.com.

Posted by Bonnie Kenaz-Mara at 7:03 PM