ChiIL Live Shows on our radar
All Performances Pay-What-You-Can! 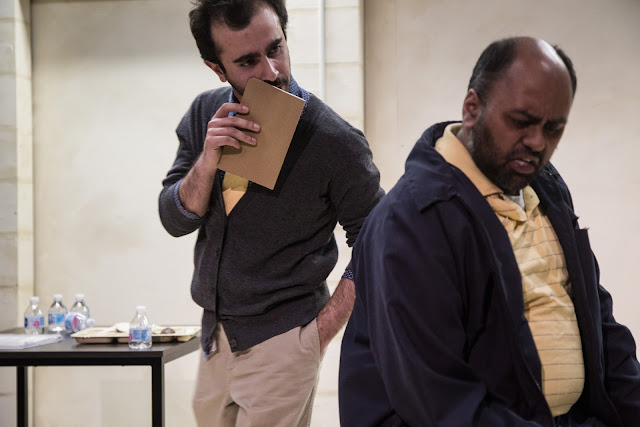 I spent last night in a cinder block institution, where disorientation, deprivation, intimidation, bullying, embarrassment and lactose intolerance were used as weapons against suspected terrorist sympathizers. Under the guise of national security, a host of normally benign objects took on sinister overtones, as sanctioned US translators turned torturers, unpacked everything from baseball bats, pliers and tubing, to clown noses, honey, and deprivation suits. 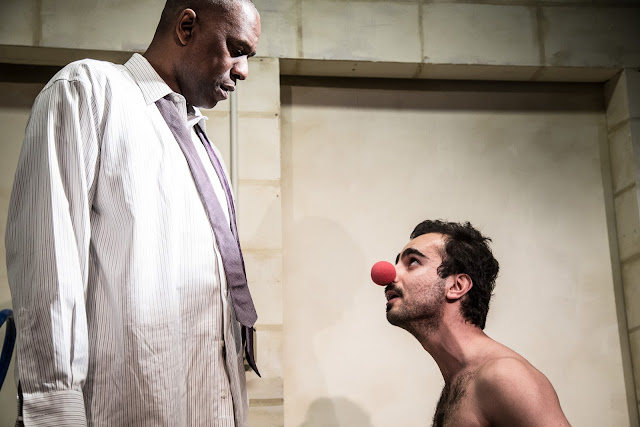 When loyalties are questioned, lines blur between the detainers and detainees, and thing get even more interesting. Language Rooms is fanciful and frightening; a delightfully dark comedy, as disturbing as it is absurd. It's easy to believe the world of this dystopian detention center could truly exist in our present political climate. It's hapless inhabitants are suspect for a lack of love of sports, a shyness for group showers, and guilt by association. 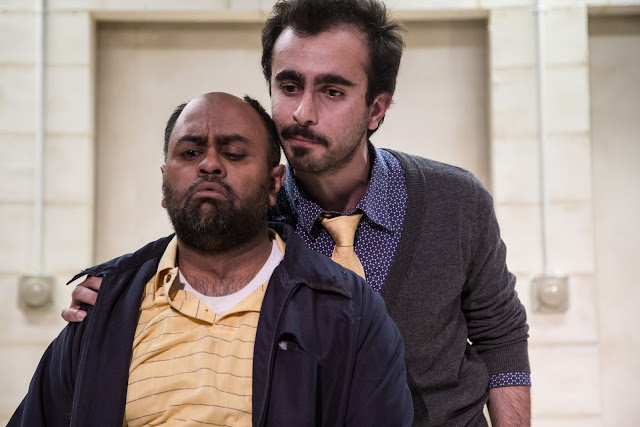 Throw in a dose of immigrant struggles, parental sacrifice and screw ups, hidden infidelity, and infidel associates, and you have one masterful mashup. In this catacomb of coerced confessions, an Egyptian translator works who barely knows his native language or culture, a black boss suspects everyone, coverups and leaks abound, and big brother is always watching. Meanwhile, higher powers are gunning for dissolving the entire division. So the pressure's on for the facility to justify their own existence and success rates, to stay in the interrogation business. The entire cast is compelling with Salar Ardebili (Ahmed) and Bilal Dardai (Samir) as particular standouts,

Yussef El Guindi’s thought provoking piece is recommended. Best of all, tickets for all performances are Pay-What-You-Can! Book now for best availability. Tickets are currently available at www.brokennosetheatre.com. 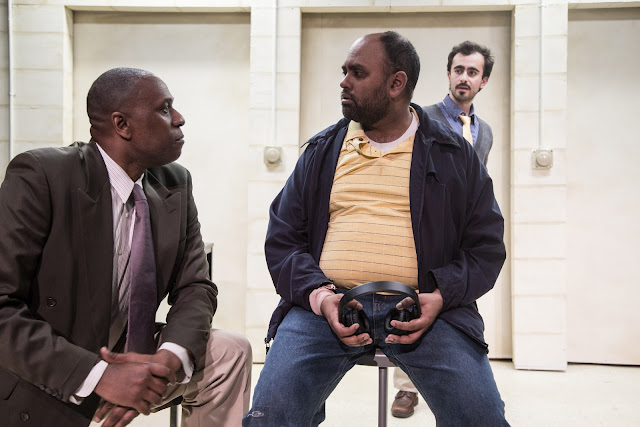 Broken Nose Theatre is pleased to continue its seventh season with the Midwest premiere of Yussef El Guindi’s dark comedy LANGUAGE ROOMS, directed by Kaiser Zaki Ahmed, playing April 19 – May 18, 2019 at BNT’s resident home, The Den Theatre (2A), 1331 N. Milwaukee Ave. in Chicago’s Wicker Park neighborhood. Tickets are currently available at www.brokennosetheatre.com. Tickets for all Broken Nose Theatre productions are available on a “pay-what-you-can” basis, allowing patrons to set their own price and ensuring theatre remains economically accessible for all audiences. The press opening is Monday, April 22 at 7:30 pm. 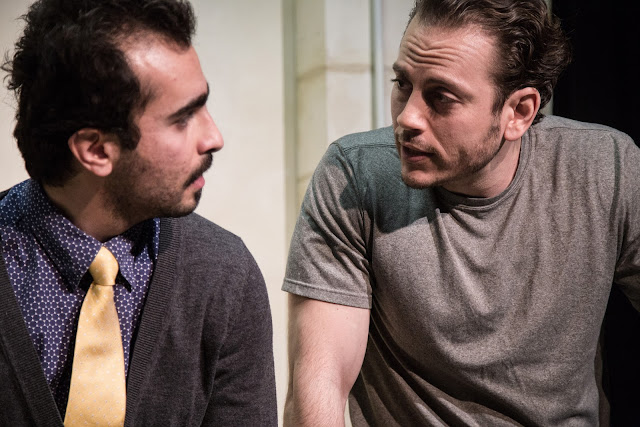 Ahmed loves America, and he’s proud to prove his patriotism whenever possible. He pays his taxes, he dresses for success at the office, and he’s made a point to be the best interrogator at this particular government detainment facility. So when a rumor swirls around the water cooler calling his loyalty into question, he works to do whatever’s necessary to maintain his reputation as one of “the good ones.” But when you’re an immigrant, can you ever truly be at home in a country always ready to view you as an enemy? Part The Office, part 1984, LANGUAGE ROOMS examines the paranoia polluting our political climate.

Comments Artistic Director Elise Marie Davis, “We at Broken Nose are consistently looking for plays that center around characters, or are set in worlds, that rarely have the opportunity to make it onstage, and Yussef's play is no different. Language Rooms is a dark comedy about state-sanctioned torture, a hilarious and horrifying balancing act in which the belly laughs are immediately followed by gut punches. After admiring the work he's done at his home company of Jackalope Theatre for years, we're thrilled to be working with director Kaiser Zaki Ahmed for the first time. We cannot wait for Chicago audiences to see what this cast and production team have in store.” 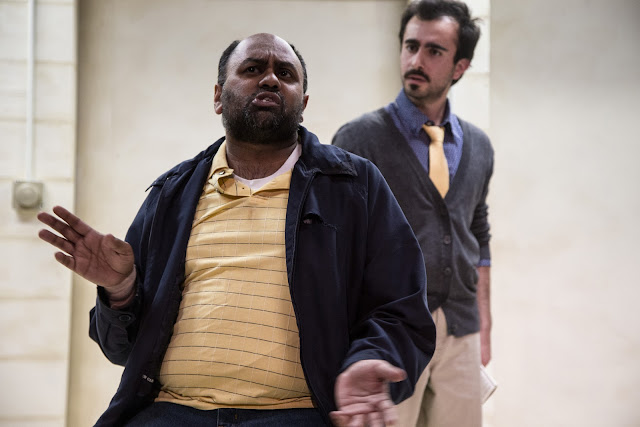 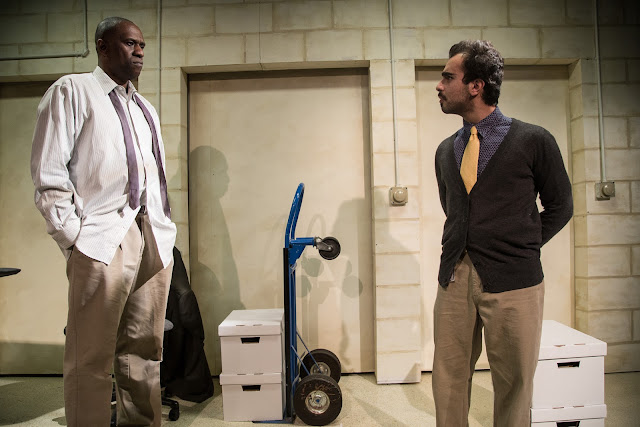 About the Artists
Yussef El Guindi’s (Playwright) productions include The Talented Ones at Artists Repertory Theatre in Portland; Our Enemies: Lively Scenes of Love and Combat at Golden Thread Productions; An Evening with Activists at Cutting Ball Theater; Collaborator at Macha Monkey Productions; Threesome at Portland Center Stage, ACT and at 59E59 (winner of a Portland Drammy for Best Original Script); Pilgrims Musa and Sheri in the New World (winner of the Steinberg/ American Theater Critics Association’s New Play Award in 2012; and the 2011 Gregory Award) also at ACT and at Center Repertory Company (Walnut Creek, CA) 2013; and Language Rooms (Edgerton Foundation New American Play Award), co-produced by Golden Thread Productions and the Asian American Theater Company in San Francisco; at the Wilma Theater in Philadelphia (premiere), and at the Los Angeles Theater Center. Our Enemies: Lively Scenes of Love and Combat was also produced by Silk Road Theater Project and won the M. Elizabeth Osborn award. His plays Back of the Throat, Pilgrims Musa and Sheri in the New World, Jihad Jones and the Kalashnikov Babes, Such a Beautiful Voice is Sayeda’s and Karima’s City have been published by Dramatists Play Service. His play Ten Acrobats in an Amazing Leap of Faith is included in Salaam/Peace: An Anthology of Middle Eastern-American Playwrights, published by TCG, 2009. Our Enemies: Lively Scenes of Love and Combat is included in the anthology Four Arab American Plays published by McFarland Books. And Threesome is published by Broadway Play Publishing Inc. Yussef is the recipient of the 2010 Middle East America Distinguished Playwright Award, and Seattle’s 2015 Stranger’s Genius Award. 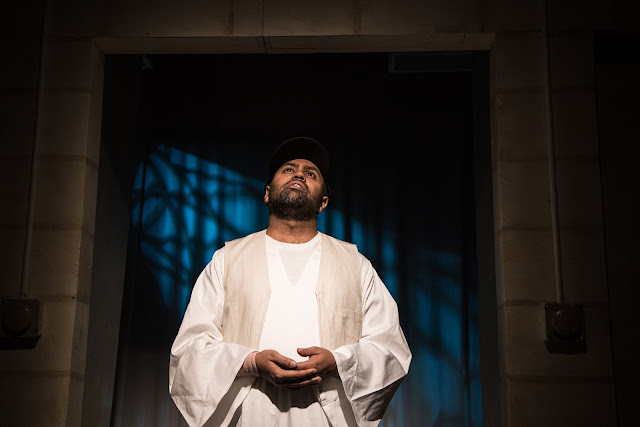 
Kaiser Zaki Ahmed (Director) is a Chicago-based theatre director, actor and teacher. An alum of Columbia College Chicago’s Theatre Directing program, Kaiser specializes in actor-driven new American plays. Most recently, he assistant directed Guards at the Taj (Steppenwolf) and Hand to God (Victory Gardens). Kaiser was the Founding Artistic Director of Jackalope, from its inception in May of 2008 through the end of 2011, and continues to serve as the Associate Artistic Director. At Jackalope, Kaiser has directed the Jeff-Nominated 1980 (or Why I'm Voting for John Anderson), The Raid, The Killing of Michael X, Long Way Go Down, Slaughter City, The Last Exodus of American Men, and countless readings and short plays. Kaiser is also an Artistic Associate at The Artistic Home Theatre Company. A member there since 2005, he directed the Jeff-Nominated Midwest Premiere of The Late Henry Moss, House of Yes and assistant directed several others. Kaiser also directed Vanya (or That’s Life!) and Washer/Dryer at Rasaka Theatre. Kaiser is a 2015-16 Eugene O’Neill National Directors Fellowship Finalist, a 2016-17 Victory Gardens Directors Inclusion Initiative recipient and an Associate Member of SDC. Favorite acting work includes Ideation and Lunacy! (Jackalope Theatre), A Nice Indian Boy (Rasaka Theatre) and The Seagull (Artistic Home Theatre), The Awake (First Floor Theatre) and several film and commercial spots. He is represented by Gray Talent. 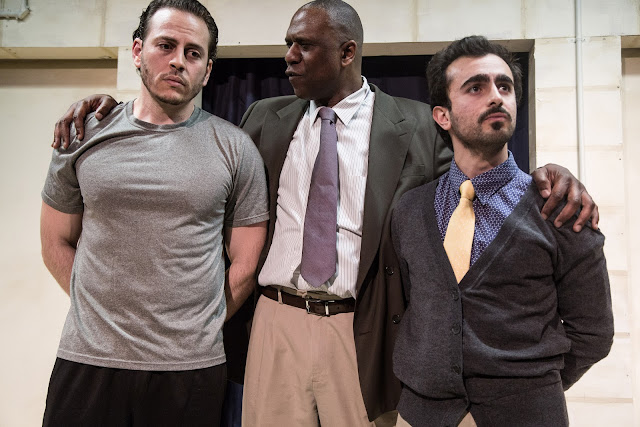 
About Broken Nose Theatre:
Broken Nose Theatre is a Pay-What-You-Can theatre company. Founded in 2012, BNT was this year's recipient of the Emerging Theater Award, presented by the League of Chicago Theatres and Broadway in Chicago. The company has produced and developed 15 full-length plays (including 8 Chicago or World Premieres) and over 40 new womencentric short plays through their annual Bechdel Fest. We strive to spark conversation, cultivate empathy, and amplify underrepresented voices, and are committed to making new, exciting and relevant theatre that is economically accessible to all audiences. For more information, please visit www.brokennosetheatre.com.
Posted by Bonnie Kenaz-Mara at 9:03 AM