REVIEW: "The Revolutionists" by Organic Theater at Greenhouse Theater Center, running May 29-July 8, 2018

TIRESIAS WAS A WEATHERMAN

Via Organic Theater Company of Chicago at the Greenhouse Theater Center 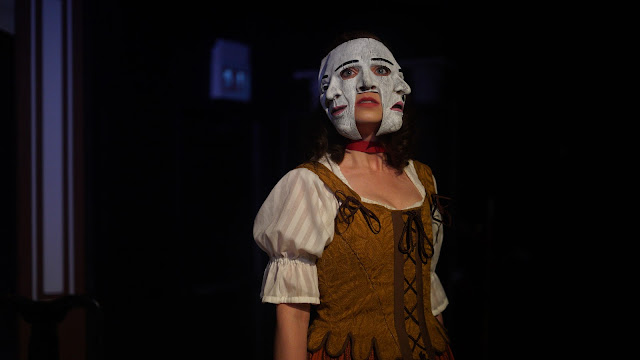 Playwright Lauren Gunderson uses modern language in her clever, thought-provoking play that is tough to classify. It begins in a somber mood, images of serious discord, pending beheadings...until the delightful Stephanie Sullivan as playwright Olympe de Gouges breaks the tension by asking how could a light-hearted comedy begin with a scene at a guillotine? (Or something like that...I forgot a pen and was mad at myself for not capturing more lines of dialogue verbatim. There are so many wonderful lines in this script.) 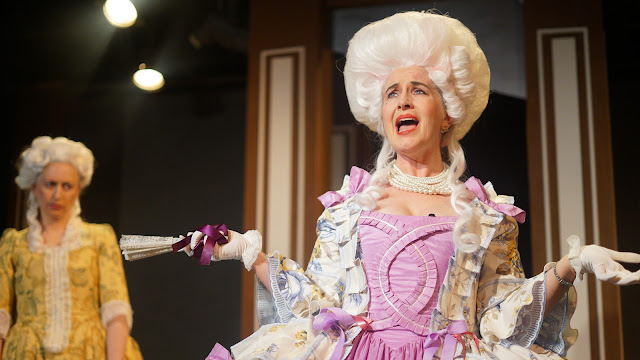 The Revolutionists explores feminism, friendships, rebelliousness, the French Revolution, and makes us feel sympathy for ousted Queen Marie Antoinette---all while making us laugh!

One of the best lines in the witty script is when the characters are debating topics for Olympe de Gouges’ next play, and musicals are discussed. “Who would want to see a musical about the French Revolution?” There is an inside-joke line about a barricade, which elicited laughs from the appreciative audience, and such banter makes The Revolutionists extra fun for theater fans. Gunderson takes advantage of having a playwright character as the others in the story discuss the impact of theater and how a play can affect society or cause change.

All four actresses are so perfect; if I had to pick a favorite, it would be the Narcissistic Queen Marie Antoinette played by Laura Sturm. She was so funny in her “It’s all about ME” mode, like how she knows it is her cue to stand up when she hears the blare of trumpets to announce her entrance! But there is a vulnerable side to her as well, when she describes her life, and how she was married off to a stranger she met on her wedding day. 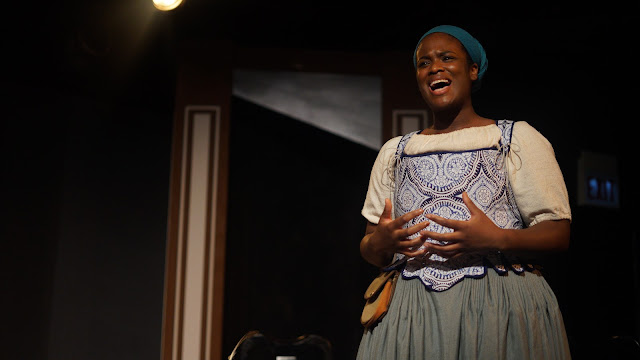 My companion said his favorite was Taylor Raye as rebel spy Marianne Angelle. Her character is undercover in France fighting for freedom in Haiti, where she has left her husband and two young children behind. I loved her description of her family as she recalls what she is risking for them. 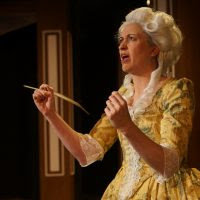 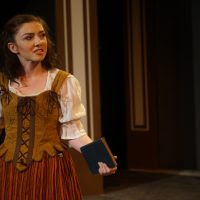 Energetic and intense Sara Copeland as assassin Charlotte Corday is also excellent. I had to look up the backstory on her tale, which is fascinating. Indeed, twenty-four-year old Corday did fatally stab a very sickly Jean-Paul Marat in his own bathtub. She was persistent--it took three tries to receive admittance to his home. For her efforts, she was beheaded a mere four days after her crime. In contrast, Marat was hailed as a martyr to his cause, which is mentioned in Gunderson’s play.

As Corday is killed, Copeland ties a red ribbon around her neck to signify the beheading. She later, as an interrogator, gets to wear the coolest stage mask ever. It is unusual to see an all-female cast get to debate art, politics, andtheir destinies in a funny, entertaining way. The Revolutionists are some thought-provoking, kick-ass women. Go support them.


The Revolutionists runs from now until July 8 and is being performed in rotating repertory with Tiresias Was a Weatherman by Jaime Mire, which also sounds intriguing. Greenhouse Theater Center is located at 2257 N. Lincoln Avenue near Oz Park.

ORGANIC THEATER COMPANY – 2018 SUMMER REPERTORY SEASON:
AWE-INSPIRING WOMEN STAND UP AND FIGHT BACK; OR,
WHICH IS WORSE, THE REIGN OF TERROR OR THE REIGN OF BIG PHARMA?
Check out full show details here.