We've shot North Coast Music Festival every year since its inception.
This year it was our pleasure to shoot Dirty Dozen Brass Band, a true treat to catch live in the intimacy of Bottom Lounge, as one of the NCMF official aftershows.

To describe how the Dirty Dozen Brass Band has arrived at its 35th Anniversary, trumpet player Gregory Davis employs a tried-and true New Orleans-centric analogy: “It ends up being like a pot of gumbo – you drop in a little okra, drop in a little shrimp, you drop in some crabs. Before you know it, you’ve mixed in all these different ingredients and you’ve got a beautiful soup. That was our approach to music early on and it still is today.” 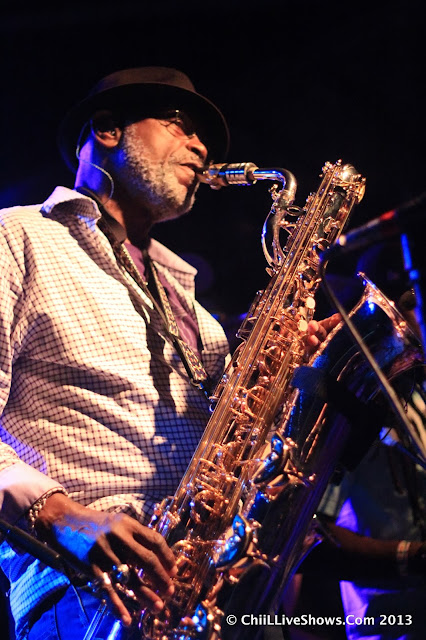 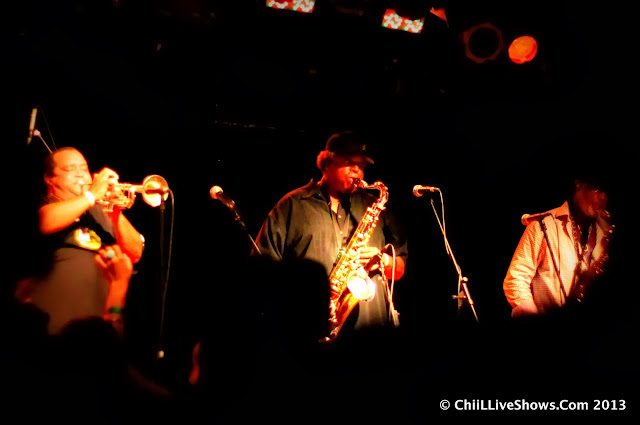 Baritone sax player Roger Lewis — who, like Davis, has been with the combo since its inception in 1977 — echoes that sentiment: “It’s a big old musical gumbo, and that probably made the difference, separating us from other brass bands out of New Orleans. It put a different twist on the music. We were not trying to change anything, we were just playing the music we wanted to play and not stay in one particular bag.”

An appetite for musicological adventure, a commitment to honor tradition while not being constrained by it, and a healthy sense of humor have brought the world-traveling Dirty Dozen Brass Band to this remarkable juncture in an already storied career. To celebrate its 35th, the band is releasing Twenty Dozen, the septet’s first studio release in six years. The new album, cut at the Music Shed in New Orleans, reunites the band with producer Scott Billington, who helmed DDBB’s first major-label release, Voodoo, in 1989. It’s a resolutely upbeat effort that seamlessly blends R&B, jazz, funk, Afro-Latino grooves, some Caribbean flavor, and even a Rihanna cover. Twenty Dozen mirrors in flow and feel a vibrant DDBB live set. The disc reaches an exuberant peak with a medley of New Orleans staples, including a particularly high-spirited rendering of “When the Saints Go Marching In.” The final track – or, as Lewis puts it, “the after-party” – is an audience encore favorite, the ribald “Dirty Old Man,” with Lewis doing an outstanding job in the title role. Twenty Dozen, says Lewis, is “classic Dirty Dozen. It’s got something for your mind, body, and soul. We’re gonna get you one way or another.” 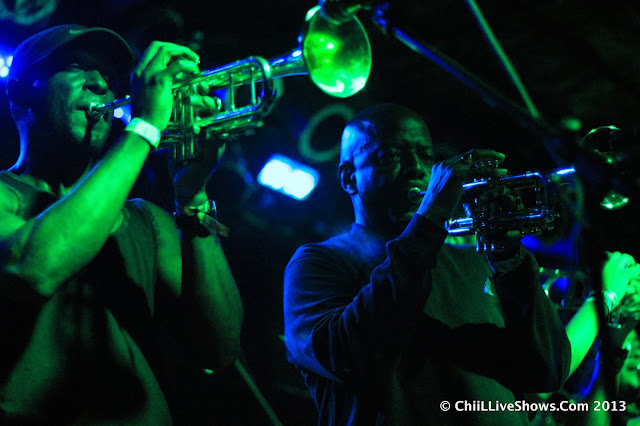 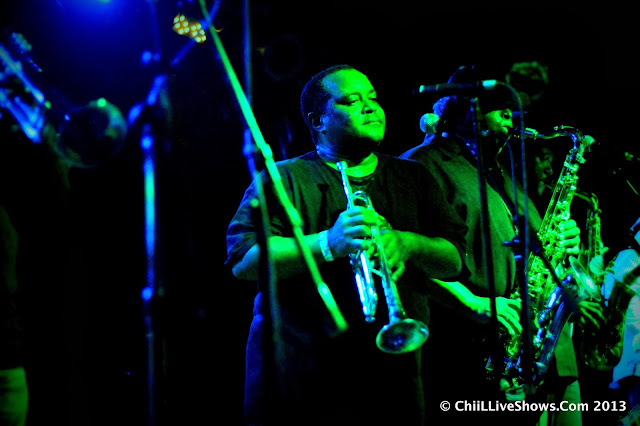 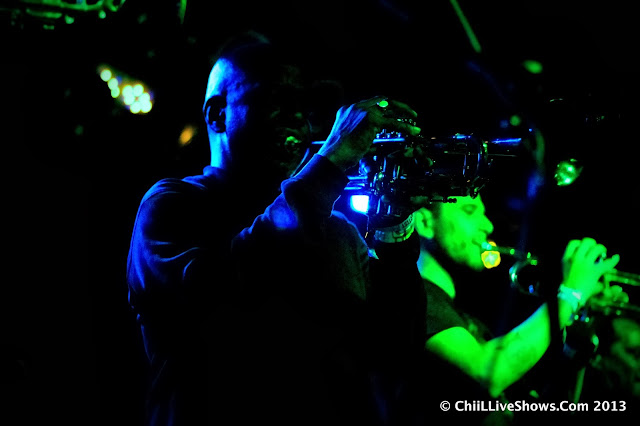 Twenty Dozen is also very much a group effort, with each of the members – Davis, Lewis, tenor-sax man Kevin Harris, trumpeter Efrem Towns, sousaphonist Kirk Joseph, drummer Terence Higgins and guitarist Jake Eckert — bringing original compositions or arrangement ideas to the sessions. It kicks off with the light-hearted funk of “Tomorrow,” segues into the jazzier “Jook” then heads into the party-hearty island groove of “Best Of All.” Billington suggested DDBB cover Rihanna’s “Don’t Stop the Music,” and the group’s reinterpretation is as ingenious as it is fun. The tough, seventies-style soul of “We Gon’ Roll” supplies the most serious moment, as composer Higgins pays tribute to the indomitable nature of his fellow NOLA residents. As Davis – whose own “Git Up” is a smoking jazz workout — explains, “Just about everybody had a song or something they wanted to contribute. As we started to record the songs and listen to them, each song seemed to fit not just with the character of the individuals who wrote them but the character of the band. We are the Dirty Dozen and it’s the overall character of the band that makes the live show work –and that makes this record work. Had we planned to make a certain kind of record, it might not have come out like that. In letting the guys’ voices speak and come out on their own, the album turned out this way.” 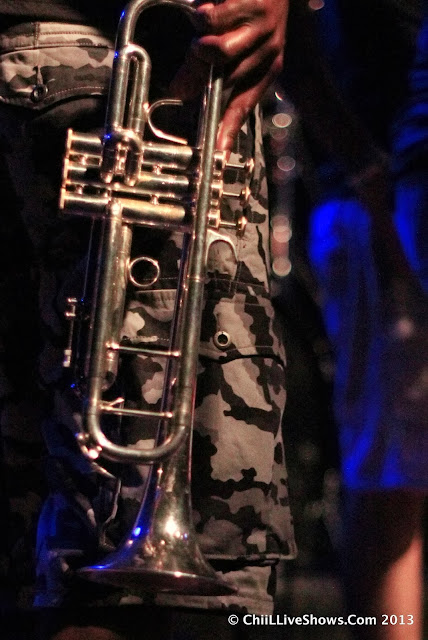 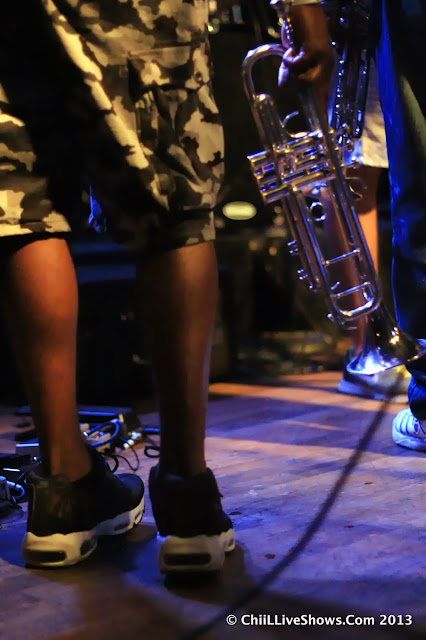 The traditional numbers at the tail end of Twenty Dozen serve as a reminder of how the group, since the beginning, has tried to reinvigorate the standards and build a bridge between old and new. Says Davis, “Over the last few years we have been doing a medley that has included ‘Paul Barbarin’s Second Line,’ ‘E Flat Blues’ and ‘Saints.’ It had been going over so well that we thought maybe we needed to capture the spirit of what we’re doing with this medley and put it on a record. ‘Saints’ is one of the most requested songs we do and you have to face the challenge of playing that song so many times. But once you get that started and see the smiles on people’s faces and they start dancing to it, it makes you want to do it a little bit more. In the studio, I was envisioning different scenes from our audiences. I’d remember the reaction I would get attempting to get people up to dance, to do certain steps and follow me. It made it so much fun to remember the faces, the smiles, the body movements of the people. To get them up, to get them sweating — it’s always a pleasure.” Listening to this new “Saints” rendition on disc has the same effect: it’s impossible to remain in your easy chair. Davis considers this and, laughing, imagines a new opportunity for the band: ““Maybe we need to sell this as a work-out CD.” 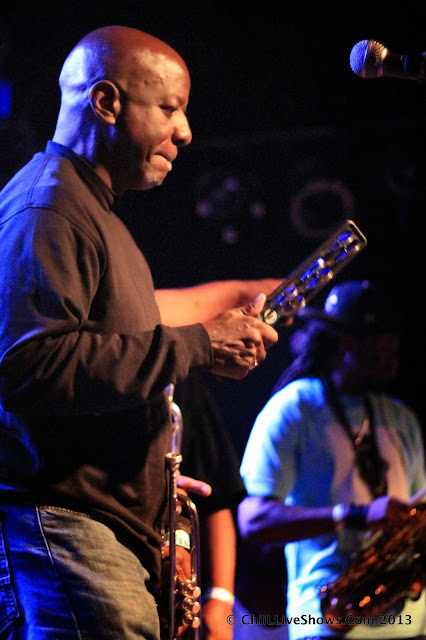 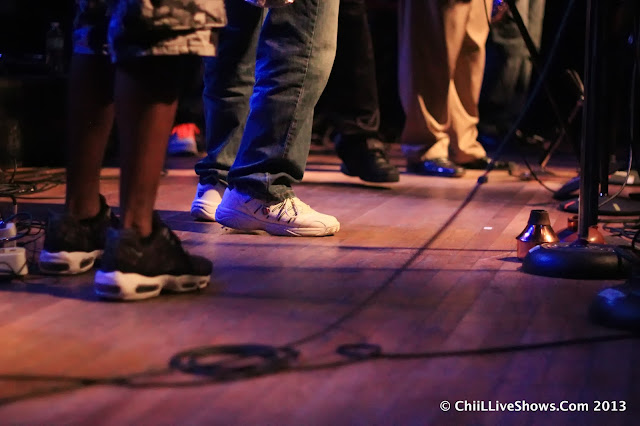 While traditional numbers infused with a DDBB flavor have always been crowd-pleasing staples of the group’s repertoire, it’s the Dirty Dozen Brass Band’s willingness to look beyond the New Orleans songbook and find connections amongst a wider range of music that has endeared them to critics, fellow musicians and a multi-generational, global audience. They’ve been embraced enthusiastically by the jam-band followers at Bonnaroo as well as by the devotees who flock to the yearly New Orleans Jazz Fest. Acts like the Black Crowes and Widespread Panic have taken them on tour and artists from Dizzy Gillespie to Elvis Costello to Norah Jones have joined them in the studio. In the wake of Hurricane Katrina, DDBB participated in the From the Big Apple to the Big Easy benefit at New York City’s Madison Square Garden and offered its own response to the aftermath of the disaster with an acclaimed 2006 song-by-song remake of Marvin Gaye’s What’s Going On. Their music has been featured on the HBO series, Treme, named after the New Orleans mid-city neighborhood where the band had formed, and the group performed on screen with Galactic and rapper Juvenile in Season 2. New Orleans remains a wellspring of musical inspiration and DDBB is a living, breathing embodiment of the continued vitality and evolution of the sounds of the city. 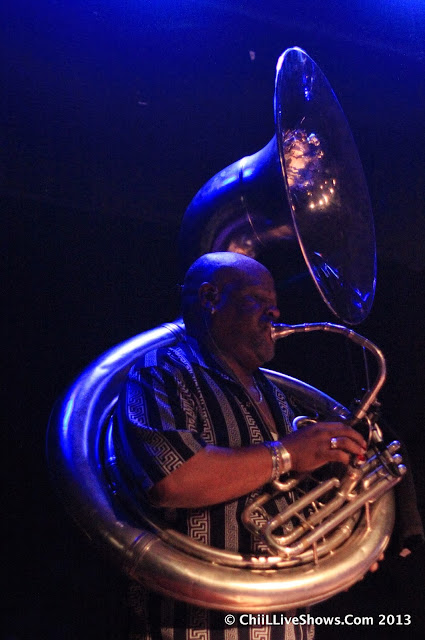 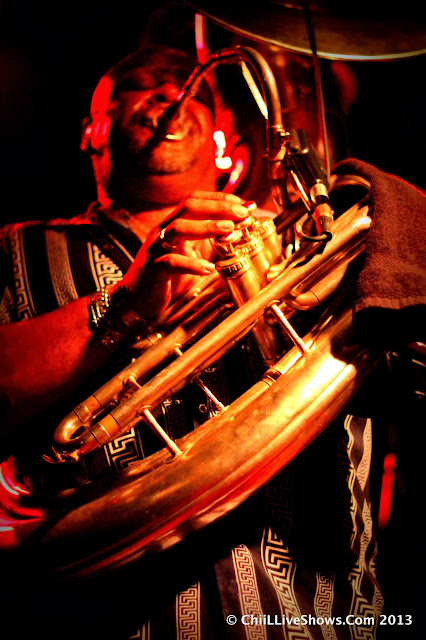 But, Davis cautions, “We’ve never been the norm, even though we started out as a traditional New Orleans brass band. In the beginning we weren’t getting work of any kind, so we thought it was okay to explore other music. That allowed us as individuals to bring ourselves into the rehearsals and that’s where we started to experiment. At the time the band started, I was a student at Loyola University and we were all being introduced to other music – to jazz from the twentieth century and so on. It’s impossible to think that you can be exposed to the harmonies that Duke Ellington was making, the rhythms coming from Dizzy Gillespie or the funk being done by James Brown, and then ignore it when you’re playing New Orleans music. New Orleans music is all of that. If we had chosen to just put in the music presented to us then as traditional, it would have stunted our growth. Being more than what we heard is what the band was about. " 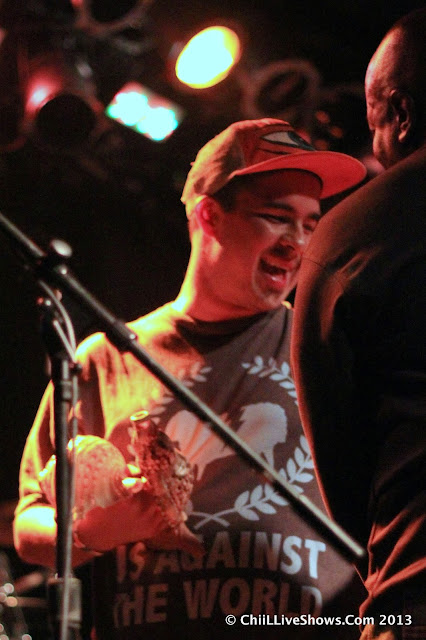 DDBB enjoyed the opportunity to look back with the 2011 reissue of it galvanizing 1984 debut, My Feet Can’t Fail Me Now, but the hard-working band has little time for nostalgia. For mainstays like Davis and Lewis, 35 years have passed in the blink of an eye, as Lewis, who also sits in with several other NOLA combos, acknowledges: “Check it out – I’m 70 years old, I’m the oldest dude in the band – I’m the oldest dude in everybody’s band, now that I think about it. I don’t know where the time went. I guess it’s just the music, man, you don’t be thinking about all that. I’ve been in it 35 straight years. The reason why the band stayed together for so long, despite all we’ve gone through, it’s the right chemistry. We’re trying to make it do what it do. If we have this conversation when I’m 80, we’ll still be trying to make it do what it do.”

“As we continue to do live shows,” Davis concludes, “the challenge is still going to be, how am I going to entertain these people that are in front of me tonight? You have to make that happen at the moment, and that’s what we do best.” 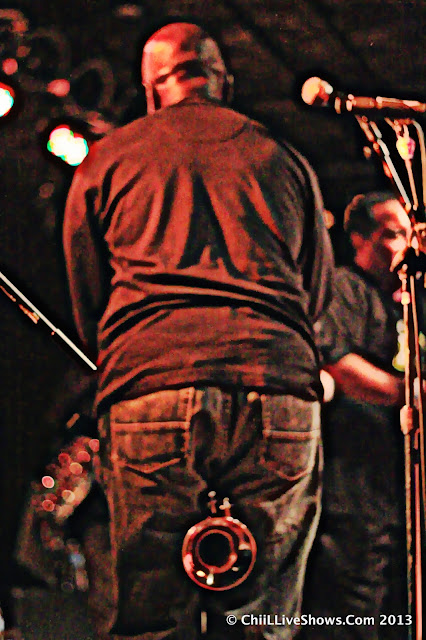 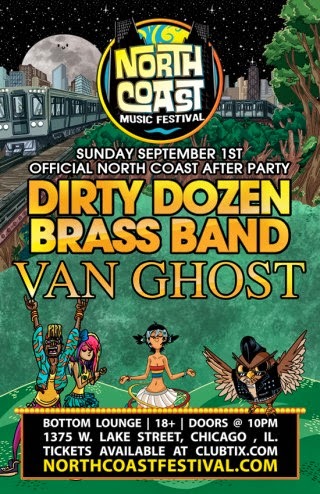 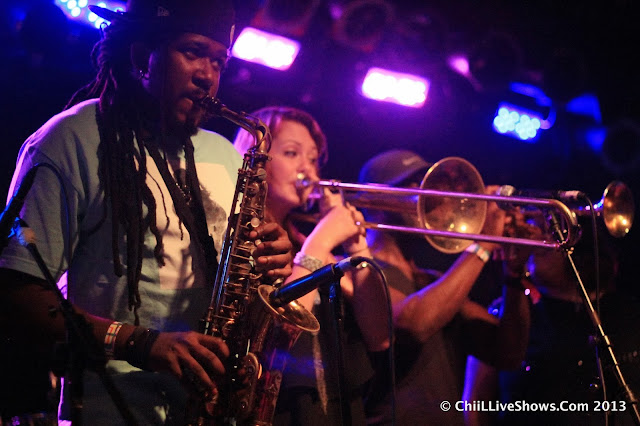 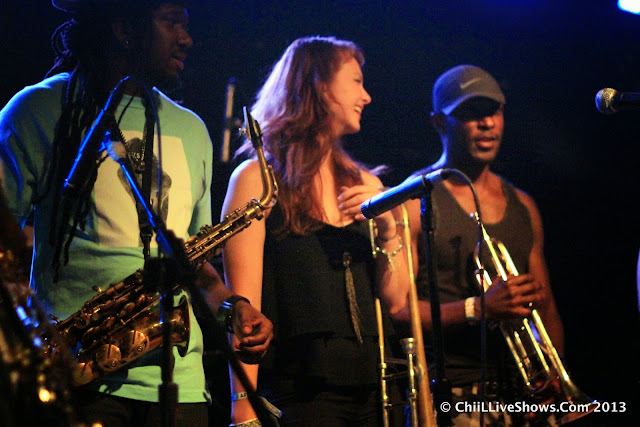 Check out more of our favorite original shots from that night below: 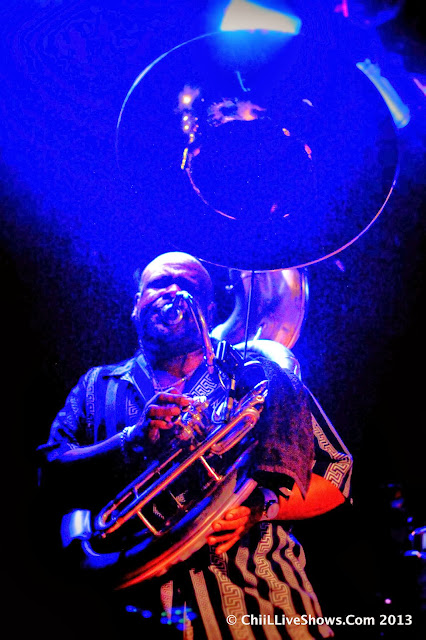 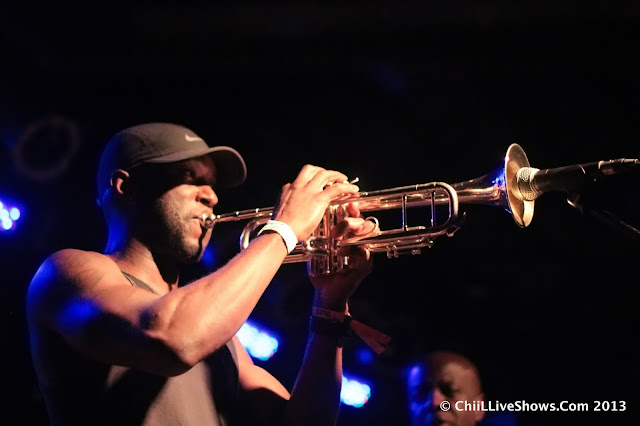 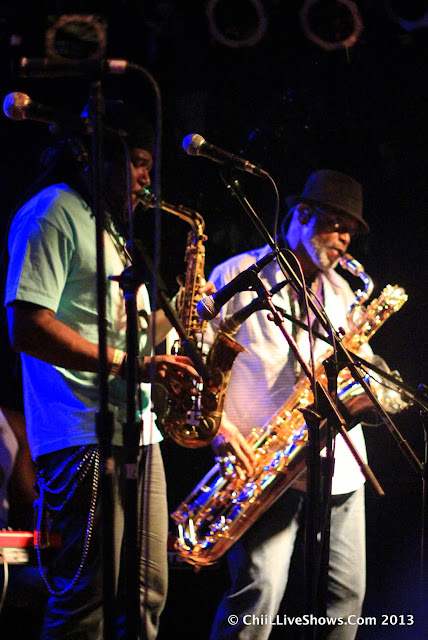 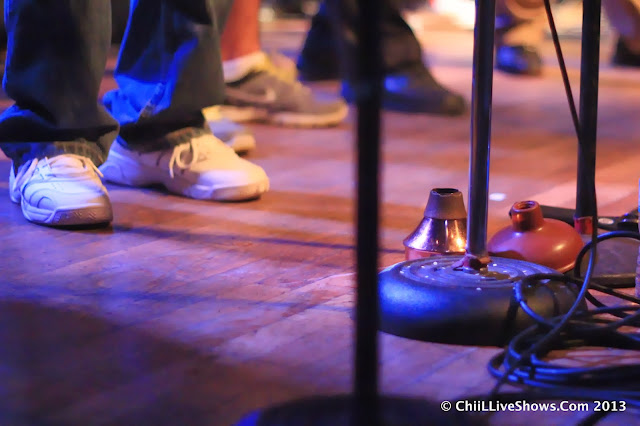 Posted by Bonnie Kenaz-Mara at 2:27 PM