ACT OUT OPENING: The Old Man and The Old Moon at Writers Theatre #midwestpremiere

Writers Theatre's opening production of the 2013/14 Season: The Old Man and The Old Moon 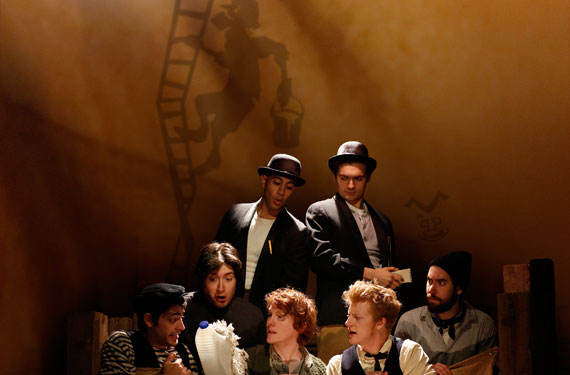 “A journey into the frontiers of undiluted imagination.”
– New York Magazine

Writers Theatre invites you to dive headlong into a theatrical fable that celebrates the power of imagination. The Old Man and The Old Moon creates an epic new mythology, centered on a man whose job is to collect spilled light to refill the leaking moon.  When his wife unexpectedly leaves home in pursuit of much-needed adventure, he abandons his post to follow her, throwing the world into chaos as he searches for his lost love, his fading memory and, ultimately, himself.
A blend of resonant storytelling, spirited indie-folk music and inventive puppetry creates a theatrical experience that will win you over with its wit, style and depth of emotion, and send you home inspired by an act of pure creation.
Writers Theatre is thrilled to collaborate with the young men of PigPen Theatre Co., who bring the story of The Old Man and The Old Moon to such brilliant, vibrant life that its New York production earned a coveted spot on multiple “Best of the Year” lists.
The Old Man and The Old Moon was developed in part at New Writers, New Plays. at Vineyard Arts Project: Ashley Melone, Founder and Artistic Director.

The Old Man and The Old Moon features music from the debut album, "Bremen."

"PigPen Theatre Company formed, in no small part, owing to their work with Stuart Carden at Carnegie Mellon," comments Artistic Director Michael Halberstam. "I was delighted to learn that, despite their enormous success with this production in New York, they wanted to continue their work on the piece.  Despite numerous offers from some of the nation's most venerable dramatic institutions, they were most engaged by the notion of returning to collaborate with their former teacher at Writers Theatre.  Following a writing workshop, two weeks at the Williamstown Theatre Festival and a full rehearsal process in Glencoe, PigPen and Writers Theatre are thrilled to present a newly improved version of their The Old Man and The Old Moon. A celebration of creativity, music, poetic text, this is a marvelous fusion of the word and the artist and a superb way to begin our final season in our current space."

"We began writing The Old Man and The Old Moon during our sophomore year at Carnegie Mellon's School of Drama,” says PigPen Theatre Co.  “It was the second play we had ever tried to write together, so in the spirit of trying to define our very young aesthetic, we were searching for inspiration in all of our classes. We found some in our movement, acting, and dramatic literature classes, but were hugely inspired by a directing course taught by Stuart Carden. He taught us to take ownership of our work in a way we hadn't thought possible. Making theatre in his class evoked a playfulness we fell in love with, so we kept doing it. We've since graduated, written and performed several original plays all over the country, and have begun telling our stories in different media. Being re-united with Stuart and working with the lovely, intelligent, and passionate artists at Writers Theatre feels like the final step in creating a world we began imagining 6 years ago. We can't wait to share it with Chicago."

"Reconnecting with the guys of PigPen Theatre Co. and developing further their epic and playful new work, The Old Man and The Old Moon, has been invigorating and a whole lot of fun,” said Associate Artistic Director Stuart Carden, who co-directs the piece. “The PigPen guys are an infectious group of theatre artists that spin their own highly original brand of storytelling, bringing together indie-folk music, surprising and elegant shadow play and an energized physicality.  All this in the service of a story that is both hugely entertaining and beguiling in its exploration of duty, memory, love and the tricky work of making change in your life.  With this piece, they have created an original myth that rather ingeniously explains how the moon came to be and why it waxes, wanes and goes through its changes.  I think this story—and the inventive way that this incredibly talented group of artists tell it—will strike a chord in our audience, as it has in me, and leave them seeing the moon in an entirely new light."

PigPen Theatre Company (Playwright and Co-director) began creating its unique brand of music, film, and theatre at Carnegie Mellon School of Drama in 2008. They have gone on to become the first group to win the NYC Fringe Festival’s top honor for a play two years in a row in 2010 and 2011, produced several original plays off-Broadway earning them critics’ picks from The New York Times, Time Out New York, New York Magazine, and more, ranking them in the top ten theatrical events of both 2011 and 2012. Their first full-length production of The Old Man and The Old Moon opened in Manhattan on October 7, 2012 with a commercial run at The Gym at Judson. The show was a critical smash hit, playing over a hundred performances to over 10,000 people, landing PigPen once again on several best-of-the-year theatre ranking lists. The Old Man and The Old Moon closed its New York run on January 6, 2013.

Stuart Carden (Co-director and Associate Artistic Director) is thrilled to reconnect with the guys of PigPen on The Old Man and The Old Moon. This marks Stuart's fifth season as Writers Theatre’s Associate Artistic Director, where he has directed Yellow Moon, Hesperia, and Travels with My Aunt. A new play specialist, Stuart leads Writers Theatre’s Literary Development Initiative, which establishes a dialogue between the theatre and noted playwrights in order to commission, develop and produce new and adapted works. Before joining Writers Theatre, he was the Associate Artistic Director of City Theatre Company in Pittsburgh. Recent regional directing projects include Circle Mirror Transformation by Annie Baker, In the Next Room (Or the Vibrator Play) by Sarah Ruhl, Crime and Punishment by Marilyn Campbell and Curt Columbus and The Lieutenant of Inishmore by Martin McDonagh (The Repertory Theatre of St. Louis), Blackbird by David Harrower, Mary’s Wedding by Stephen Massicotte, A Picasso by Jeffrey Hatcher (City Theatre Company), The Pillowman by Martin McDonagh, Martin Crimp’s adaptation of The False Servant and Stones In His Pockets by Marie Jones (Pittsburgh Irish and Classical Theatre). In Chicago with Silk Road Theatre Project (now Silk Road Rising), he directed the widely acclaimed world premiere of Shishir Kurup’s The Merchant on Venice (a South Asian-American and Bollywood-inspired adaptation of Shakespeare’s original), the world and regional premieres of Yussef El Guindi’s 10 Acrobats In an Amazing Leap of Faith and Back Of The Throat, as well as the Chicago premiere of David Henry Hwang’s The Golden Child. Coming up, he will direct Nina Raines' Tribes in a co-production with Philadelphia Theatre Company and City Theatre. Carden is a proud alum of Carnegie Mellon University, a member of the Stage Directors and Choreographers Society, and dad of twin toddlers Griffin and Dashiell.

ABOUT WRITERS THEATRE
Over the past twenty-two seasons, Writers Theatre has become a major Chicagoland cultural destination with a national reputation for excellence. Under the artistic leadership of Michael Halberstam and the executive leadership of Kathryn M. Lipuma, Writers Theatre has been deemed the “best drama company in the nation” by the Wall Street Journal and achieved twenty years of surplus operations. The company, which plays to a sold-out and discerning audience of 35,000 patrons each season, has garnered critical praise for the consistent high quality and intimacy of its artistry. Prized for the finest interpretations of classic and contemporary theatre in its two intensely intimate venues, Writers Theatre’s acclaimed work includes Artistic Director Michael Halberstam’s world premiere in Glencoe and subsequent production of A Minister’s Wife at Lincoln Center Theater; David Cromer’s productions of A Streetcar Named Desire and Picnic; and the commissioning, world premiere and New York premiere of Crime and Punishment, which has received more than 30 subsequent regional theater productions.
In July, 2011, Writers Theatre announced the hiring of the award-winning, internationally renowned Studio Gang Architects, led by principle Jeanne Gang, FAIA to design a new home for the Theatre in downtown Glencoe which will once again allow the Theatre to grow to accommodate its audience, while maintaining its trademark intimacy. The new facility will resonate with and complement the Theatre’s neighboring Glencoe community and will add tremendous value to Chicagoland and the North Shore as a premier cultural destination.

Posted by Bonnie Kenaz-Mara at 4:37 PM

Email ThisBlogThis!Share to TwitterShare to FacebookShare to Pinterest
Labels: Midwest premiere, The Old Man and The Old Moon, Writers Theatre