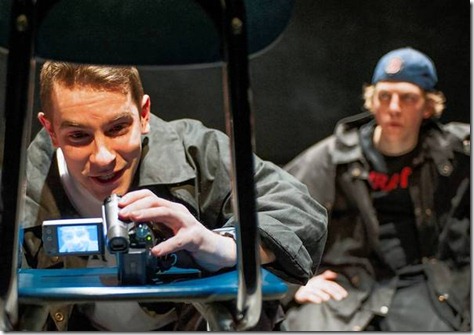 Columbinus aims a lens at teen behavior, from normal angst and achievement to the murderous, real life rampage of a budding psychopath and his accomplice.


DUE TO TICKET DEMAND,
ATC EXTENDS ITS HIT PRODUCTION OF COLUMBINUS
THROUGH APRIL 7

ChiIL Live shows caught opening night of Columbinus and highly recommend it.  This timely and timeless production is thought provoking and opens necessary dialogue about gun violence in our schools and our society.  Actual families of survivors of the Columbine massacre were there for the opening, insuring the actors made a tactful and truthful portrayal.

We've seen a number of productions in this genre, regarding the twin towers tragedy and the beating death of a gay college student among others.  Unlike ad nauseum news reports and exposes, documentary tragedy theatre acts as a memorial, and art.   Mostly it makes people think instead of tuning out, because they've made a conscious choice to be there.

Columbinus is a tasteful and compelling must see.   The staging and acting combine into a powerful piece that will stay with you long after the  light come on.   Book your tickets now, before the final weeks of Columbinus sell out. 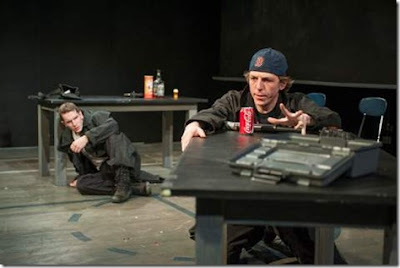 American Theater Company (ATC) announces new performance dates for its world premiere production of the revised version of columbinus, written by Stephen Karam and PJ Paparelli, with dramaturgy by Patricia Hersch, and conceived and directed by Artistic Director PJ Paparelli. The production is now extended through Sunday, April 7, 2013 at American Theater Company, 1909 W Byron St, Chicago, IL. columbinus has garnered rave critical reviews of its new third act, which premieres material devised from recent interviews with survivors of the Columbine High School Shootings, families of victims and residents of Littleton, Colorado. The new material includes never-before-released information on the shooters and their families and first-hand accounts of both the Columbine and Aurora shootings. 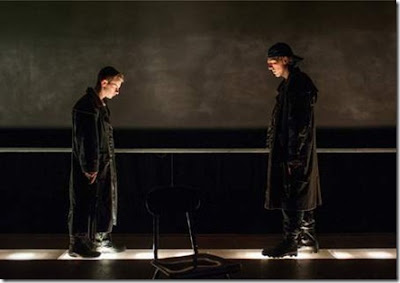 Littleton, Colorado. 1999.  Two teenagers devastate a community and shock the country when they walk into their suburban high school and kill twelve students and one teacher.  Based on interviews with teenagers across the country and survivors and community members in Littleton, this haunting drama takes a hard look at modern teenagers through the lens of the most infamous high school shooting in American history.

ATC further announces that its musical production, a restored & revised Hair, will be moved from its current position to the spring 2014 spot.  The ambitious revival, to be directed by Paparelli, will now close out the Company’s 29th season. In its place, a revised remount of Stephen Karam’sSpeech & Debate will run from May 13 – June 10, 2013, also directed by PJ Paparelli.  Speech & Debate made its Chicago Premiere at ATC in 2008 to critical and popular success; the limited-engagement production will feature original cast member Sadieh Rifai reprising her original role, as well asWill Allen in his ATC debut.

“We are so pleased to offer Chicagoans a longer run of columbinus.  When looking at a shorter extension and a compromised production of Hair, we decided it was so important to run columbinus as long as possible and allow audience to experience this revised version of Hair as author Jim Rado and I envision it,” says Artistic Director PJ Paparelli. “Audience members have asked me so many times if we were ever going to remount Speech & Debate, and I always have said no.  However, this unique situation allows us to bring this show back to Chicago with some script revisions and a new production design.  I’m thrilled that Stephen and I will be working together again on this wickedly funny play.”

Speech & Debate is a quick-witted and timely comedy that tells the story of three misfits who team up to expose their teacher's online secrets while forming their high school's first Speech and Debate club.  With a searing script by columbinus co-writer Stephen Karam, Artistic Director PJ Paparelli remounts this hysterical yet touching tale of three teens' quest for fame and free speech.

AMERICAN THEATER COMPANY
American Theater Company is an ensemble of artists committed to producing new and classic American stories that ask the question, “What does it mean to be an American?” We provide a truly intimate home for the community to experience meaningful stories.  We foster a nurturing environment for artists to take risks and create essential work.

Posted by Bonnie Kenaz-Mara at 3:13 PM