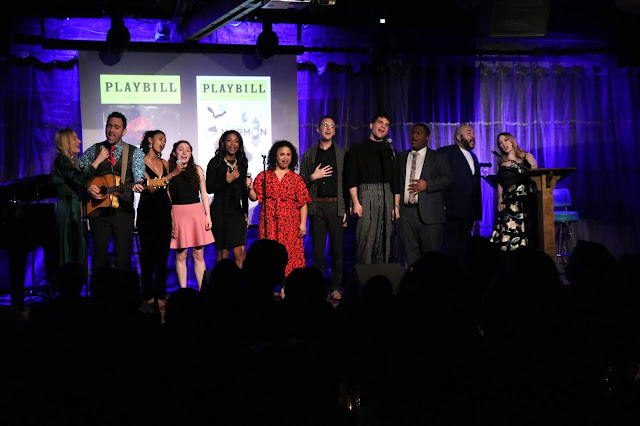 From the familiar Hamilton and The Lion King to new(er) musicals like Jagged Little Pill (music by Alanis Morissette) and Ain’t Too Proud, The Life and Times of the Temptations, the “New Faces Sing Broadway Now” by Porchlight Music Theatre is a delightful evening of amazing talent. Held at Evanston Space on Chicago Avenue, this is a really cool venue for cabaret seating and enjoying a cocktail during the show (and before and after??). Space has hosted such acts as Dr. John, The Lumineers, and Alabama Shakes. There is also a recording studio in the venue and a pizza restaurant with a beer garden called Union Squared attached. It has everything!!  A second show was held at The Arts Club of Chicago at 201 E. Ontario.

Hosted by the talented--and funny---Jeff-winner Cory Goodrich, she introduced the dazzling cast and joined in some of the routines herself. My companion (and former 7th grade  student who is now a teacher herself! Life is cool...) and I really liked when Miss Goodrich tuned her guitar and made a crack about her “g-string being out of tune.” Ms. Goodrich can be seen in the upcoming production of Freaky Friday at Porchlight. That should be a hoot. It opens on April 10. 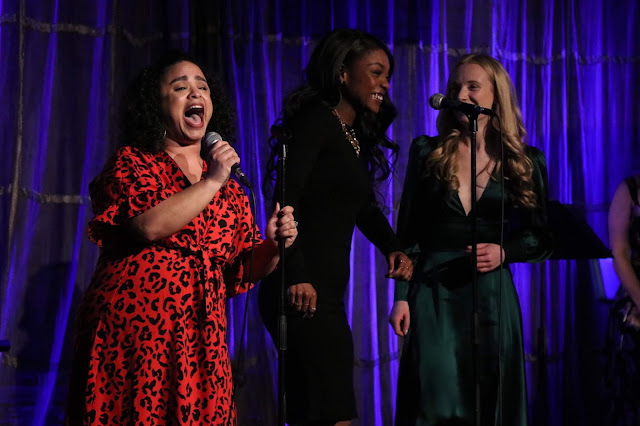 The entire cast each brought something special to the performance. It would be futile to pick a “favorite.” But I will mention some standouts. I loved “Girl Scout” from Beetlejuice by Rebecca Keeshin. The “Bad Guy Medley” featured songs of the villains in shows: characters from Phantom of the Opera, Hadestown, Beetlejuice, and the king in Hamilton. The gentlemen singing were: Barry DeBois, Laz Estrada, and Michael E. Martin. Emily Agy electrified the place with “River Deep” from Tina.

The show Six, about the half dozen unfortunate wives of King Henry VIII, had its North American debut at Chicago Shakespeare Theater last year and has gone on to Broadway as a huge hit. (It will be touring this summer and back in Chicago at Broadway Playhouse. I hear it is a must-see. You’re welcome.) The song “Ex Wives” features all of the women in the cast belting it out. The other ladies in the show were: Alli Atkenson, Nina Jayashankar, and Jayla Williams Craig. Curiously, Chicago boasts four of the stars in Six currently running in New York---they were all in past “New Faces Sing Broadway” shows. So you could be enjoying theTony-award winners of tomorrow.

There was a trivia contest based on Jerry Herman shows, the beloved composer of Mame and Hello, Dolly! There were audience sing-alongs for “Hakuna Matata” and “All That Jazz” from Chicago. A fun evening all around.

Porchlight will be hosting a “New Faces Sing Broadway: 1987” on April 27 at Evanston Space and April 28 at The Arts Club of Chicago. The musicals featured will be from 1987, so get ready to hear Les Miserables, Into the Woods, and Me and My Girl, plus others.


Catherine Hellmann is a teacher and lover of musicals. She is way excited to finally see Dear Evan Hansen this summer. 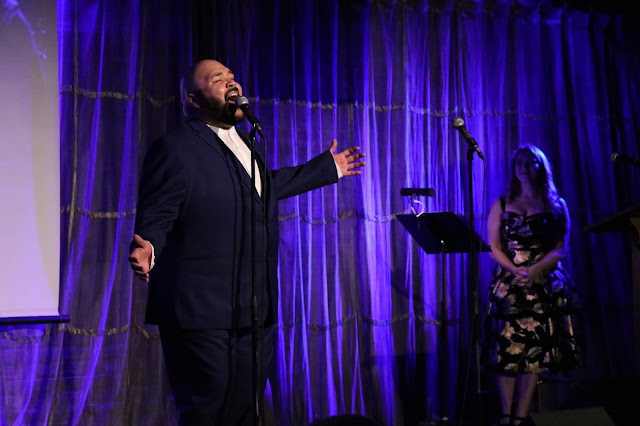 Porchlight Music Theatre announces the star of Porchlight’s spring production, the Chicago premiere of Disney’s Freaky Friday, A New Musical Cory Goodrich as the host of New Faces Sing Broadway NOW, directed by Johanna McKenzie Miller and music directed by Tom Vendafreddo; at Evanston at SPACE, 1245 Chicago Ave., Monday, Feb. 24 at 7:30 p.m. and at The Arts Club of Chicago, 201 E. Ontario Street, Tuesday, Feb. 25 at 7:30 p.m. Single tickets to each New Faces are $37 at SPACE and $60 at The Arts Club. The Arts Club performances include a pre-performance cocktail hour starting at 6:30 p.m. Tickets are available at PorchlightMusicTheatre.org or by calling the Porchlight Music Theatre box office, 773.777.9884. 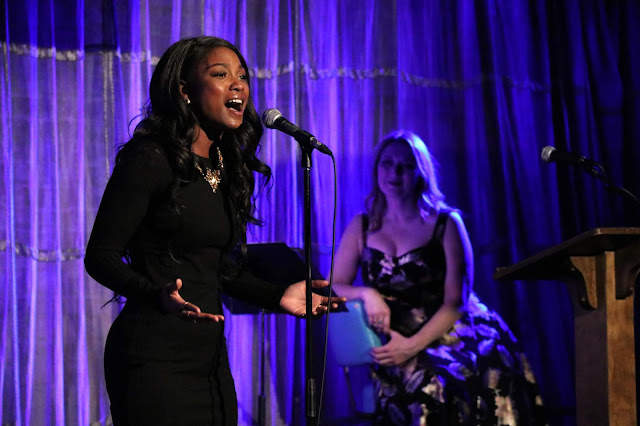 Porchlight Music Theatre’s hugely popular New Faces Sing Broadway series takes audiences on a musical journey from start to finish of an entire Broadway season. Peppered with photos and films of that theatrical year in an exciting multimedia presentation, trivia games with prizes, sing-alongs and more, in this edition, New Faces Sing Broadway NOW, host Goodrich introduces the audience to the next generation of Chicago music theatre artists while serving as a guide to the stars, songs and stories of this current season on Broadway including songs from Hadestown, Moulin Rouge, Jagged Little Pill, TINA - The Tina Turner Musical and more.

Goodrich hosts the latest New Faces Sing Broadway and was recently announced as the lead in Porchlight Music Theatre’s spring Mainstage production, the Chicago premiere of Disney’s Freaky Friday, April 10 - May 24, 2020 at the Ruth Page Center for the Arts. Disney’s Freaky Friday is the newest musical comedy for the whole family and is based on the hit book and beloved films. Freaky Friday comes from the combined talents who created Once Upon a Mattress, Friday Night Lights, Parenthood, Next to Normal, American Idiot, High Fidelity, If/Then and Bring it On.

ABOUT CORY GOODRICH, New Faces Sing Broadway NOW, host
Cory Goodrich is making her Porchlight Music Theatre debut in Freaky Friday, A New Musical. Goodrich is a Jeff Award-winning actress for her roles as “Mother” in Ragtime (Drury Lane Oakbrook) and as “June Carter Cash” in Ring of Fire, (Mercury Theater Chicago). A five-time Jeff nominee, Goodrich is also a writer, artist and mother of two, a children’s composer with her two award-winning CDs, “Hush” and “Wiggly Toes,” and singer/songwriter with two albums: “W.O.M.A.N” and “Wildwood Flower” and producer of six volumes of “Season of Carols, Holiday Music to Benefit Season of Concern.” 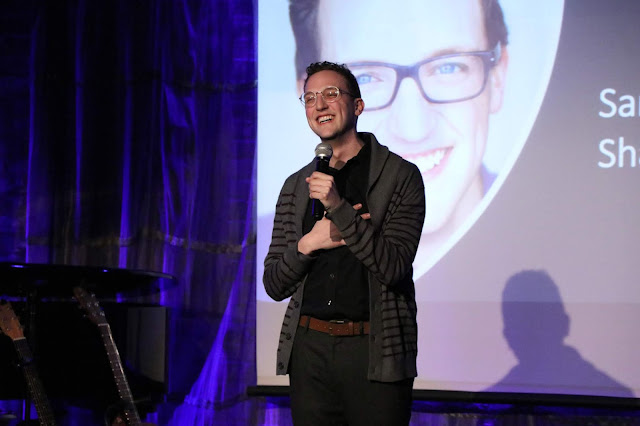 ABOUT PORCHLIGHT MUSIC THEATRE
As the home for music theatre in Chicago now in its 25th season, Porchlight Music Theatre is nationally recognized for reimagining classic productions, developing new works and showcasing musical theatre’s noted Chicago veterans and rising stars. Porchlight elevates the genre by providing intimate and powerful theatrical experiences of music theatre through the lens of the “Chicago Style.” The 2017–2018 year marked a milestone for Porchlight as the company became an Artist In-Residence at the historic Ruth Page Center for the Arts in Chicago’s Gold Coast. Porchlight’s rich history includes the staging of more than 70 productions with 15 Chicago premieres and five world premieres. Through Porchlight’s “Off the Porch” new works program, the musicals of the next generation are developed and given a first audience. The School at Porchlight is Chicago’s center for music theatre training in the areas of performance, writing and appreciation including the launch of a youth summer “Make Your Own Musical” Camp in 2017. The company’s many accolades include 30 Black Theatre Alliance nominations and 12 awards, as well as a total of 167 Joseph Jefferson Award nominations resulting in 42 Jeff Awards including five consecutive Best Production awards for The Scottsboro Boys (2017), Dreamgirls (2016), Sondheim on Sondheim (2015), Ain’t Misbehavin’ (2014) and A Class Act (2013).

Porchlight Music Theatre announces the star of Porchlight’s spring production, the Chicago premiere of Disney’s Freaky Friday, A New Musical Cory Goodrich as the host of New Faces Sing Broadway NOW, directed by Johanna McKenzie Miller and music directed by Tom Vendafreddo; at Evanston at SPACE, 1245 Chicago Ave., Monday, Feb. 24 at 7:30 p.m. and at The Arts Club of Chicago, 201 E. Ontario Street, Tuesday, Feb. 25 at 7:30 p.m. Single tickets to each New Faces are $37 at SPACE and $60 at The Arts Club. The Arts Club performances include a pre-performance cocktail hour starting at 6:30 p.m. Tickets are available at PorchlightMusicTheatre.org or by calling the Porchlight Music Theatre box office, 773.777.9884.