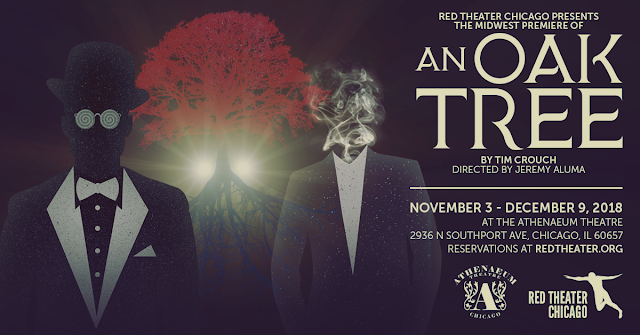 Red Theater Chicago announces the start of their 7th season with their upcoming production of An Oak Tree by Tim Crouch, directed by Jeremy Aluma and starring Gage Wallace, both Red Theater company members. Performances run November 1 through December 9, 2018. Performances run at the Athenaeum Theatre in Studio One at 2936 N Southport Ave, Chicago, IL 60657.

I'll be out for the press opening on Saturday, November 3 at 8:00pm, so check back soon after for my full review.

THE PLAY
Two Actors. One has rehearsed the play. The second has never even read it. Performed by a different person each night, the second actor will discover the play and their role at the same time as you do. In this Midwest Premiere by Tim Crouch, An Oak Tree asks, how do we transform our world in order to survive our pain? How do we create our own reality? Anything can happen in this play that illuminates the magic of theater – a cheap trick and a genuine spell all at once.
THE FORMAT
The FIRST ACTOR or HYPNOTIST is being played by Gage Wallace. We will announce the actors playing the SECOND ACTOR on the Tuesday prior to each upcoming weekend performances.

TICKETS: Tickets are on sale at redtheater.org
PRESS CONTACT: Neil O'Callaghan at marketing@redtheater.org or 617.794.2475

An Oak Tree by Tim Crouch will be performed at the Athenaeum Theatre in Studio One at 2936 N Southport Ave, Chicago, IL 60657.
The closest “L” stop is the Brown Line at Wellington Ave. Then walk 4 blocks WEST to Southport. Turn LEFT on Southport and go to 2936 N. Southport. The best bus to take is CTA Bus #9. For bus and train schedules, contact the CTA at (312) 836-7000.

THE PEOPLE
Tim Crouch (Playwright)​ is a UK theatre artist based in Brighton. He writes plays, performs inthem and takes responsibility for their production. He started  to make his own work in 2003. Before then he was an actor. His plays include My Arm, An Oak Tree, ENGLAND, and The Author. His work has been seen at the Royal Court Theatre, the Traverse Theatre in Edinburgh, the
British Council, Brighton Festival, Singapore Arts Festival, Culturgest in Lisbon, Warwick Arts Centre, the Royal Shakespeare Company and the National Theatre. Tim’s work tours extensively to UK and international venues and festivals. timcrouchtheatre.co.uk

Gage Wallace (HYPNOTIST)​ is a Founding and Company Member with Red Theater Chicago. He is also an Ensemble Member with Strawdog Theatre Company. Recent Chicago Credits include: Taste (Jeff Award – Principal Actor), Year of the Rooster, Dylan, and Red Hamlet (Red Theater Chicago); Pillars of the Community, Cymbeline (Strawdog Theatre); You Can't Take It with You (Oak Park Festival Theatre); The White Road (Jeff Award Nomination – Ensemble), In a Little World of Our Own (Irish Theatre of Chicago); Ghosts (Mary Arrchie Theatre Co.). Gage is represented by the incredible people at Shirley Hamilton Talent. www.gagewallace.com

The FIRST ACTOR or HYPNOTIST is being played by Gage Wallace. We will announce the actors playing the SECOND ACTOR on the Tuesday prior to each upcoming weekend performances.

ABOUT RED THEATER CHICAGO
Red Theater Chicago, now in its 7th Season, is committed to honoring all audiences by asking
dangerous questions through accessible performances that broaden perspectives and inspire
dialogue.

Posted by Bonnie Kenaz-Mara at 2:28 PM