REVIEW: Tiresias Was a Weatherman by the Organic Theater Company at the Greenhouse Theater Through July 8, 2018

Chi IL Live Shows On Our Radar:
Tiresias Was a Weatherman
by the Organic Theater Company
at the Greenhouse Theater 2257 N. Lincoln Avenue

According to the press release, “Jaime Mire’s new comedy
Tiresias Was a Weatherman deals with timely issues of today such as mental health, pharmaceuticals, predatory media, and extreme weather, in a world where a minimal scientific alteration to your brain could potentially save both you and the world.  Or at least that’s what they say…” 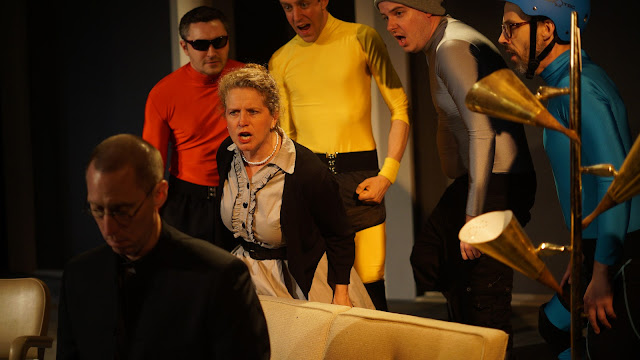 
The storyline reminded me of my favorite beach on the East side of Lake Michigan, Pier Cove. There is a pile of rocks along the beach that have inspirational quotes on them. The usual expressions of thanks, blessings, and encouragement are penned on the rocks...but one rock reads: “Take your meds,” which I think is awesome. Then all will be well, right? The emphasis on taking one’s meds is at the forefront of Mire’s play. 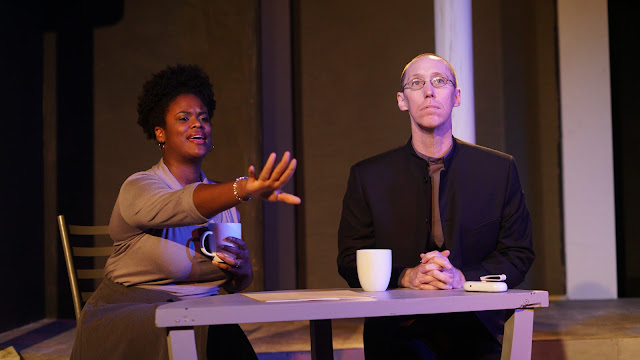 The taking of meds from “Crazy Pants Pharmaceuticals” (love that name!) can cause catastrophic meteorological effects, even deadly hurricanes. One of the main characters, a doctor named Troy, lost his only son, Paul, in the last huge storm. Troy, who seems to have no emotions, is later accused of using his dead son for publicity; he even refers to Paul’s autopsy as a “research cadaver.” Ouch. Troy needs a feelings chip...

Annie, Troy’s stepdaughter, is portrayed by Shaina Schrooten, who does a great job as the frustrated, emotionally distraught daughter of Laura Sturm’s Joyce. She misses her brother Paul terribly, and describes to her psychiatrist how losing a sibling is its own category of being orphaned. Like the character of Antigone, she just wishes for her deceased brother to be buried so he can rest in peace. “He deserves a burial,” she insists. Annie has some wonderful lines, like how she doesn’t consider pot to be a med on her health history paperwork---”it’s like toothpaste,” she explains. 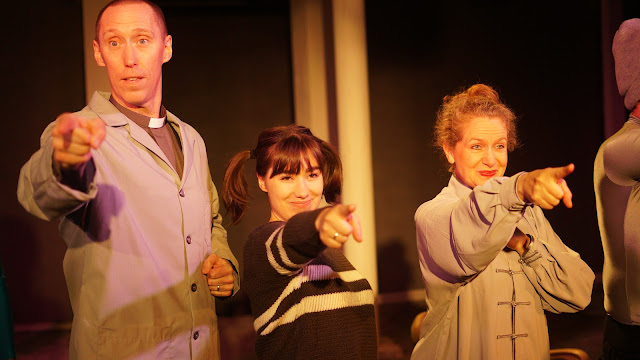 
Four actors personify the Sun, Wind, Rain, and Thunder. Some of their dialogue is expressed in rhymes like a Dr. Seuss book which makes their intentions less sinister. “We are the weather. We work well together!” But the plot is confusing.

Was it just me being un-hip again? So I asked my date what I was missing. His response: “The Weather freaked out when meds weren't taken or taken on time, I think. I interpreted the weather as thought, like side effects ??? Does that make sense?  I say this because the weather was also encouraging Annie, a.k.a. Annabelle, to pop a pill. I wish I could be of more help but that's how I interpreted the weather.” This is one of those shows that you don’t want to take your parents to because if we were lost, mom and dad are really going to be clueless. 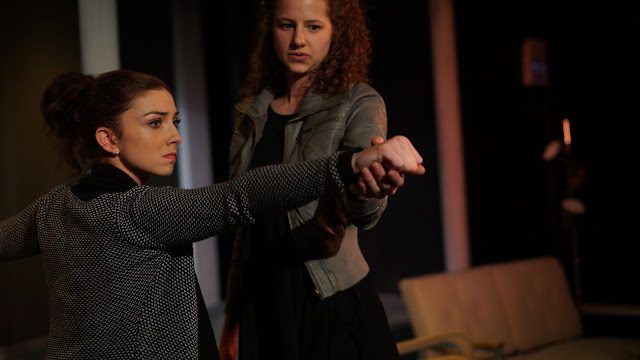 All of the actors are well-intentioned and do a commendable job. I was especially impressed with three actresses who are also in The Revolutionists,
which I reviewed last week. The two plays are showing in repertory at Greenhouse until July 8. Sara Copland, Laura Sturm, and Taylor Raye appear in both productions, which is admirable. As my amusing companion noted: ”How do they do that? I would be fucking up and saying my lines from the wrong play.” Taylor Raye is funny, offering some of the only humor in the show as a talk-show host who is a bit too admiring of her guest, the doctor.

John Arthur Lewis plays the doctor who has developed an experimental chip that can be implanted in a person’s brain to suppress and control emotions. Referred to as a “remote controlled brain inhibitor,” the talk show host is thrilled with the possibilities, but the doctor wants its uses to be kept in check. Troy must be his own test subject---he is so deadpan about everything.

I loved the costumes, which are all black and grey for the human characters, but bright colors for the Weathermen. The Weathermen are a talented group who also sing, sometimes in harmony. They had a clever list of medications: “fuck it all, Adderall,” and “closure is overrated, just get medicated.” 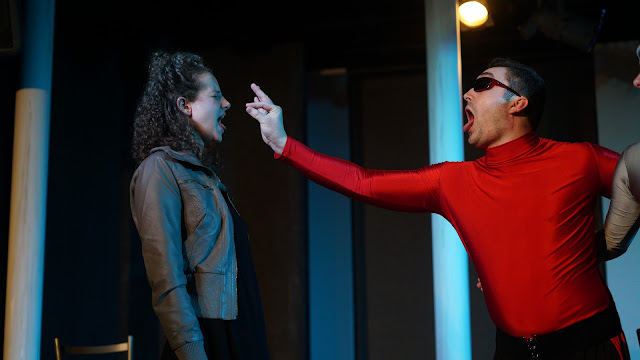 The play ends with Annie’s birthday. As she observes, birthdays “make us look at ourselves---or we are just furniture.”

This show runs in repertory with The Revolutionists (check out my review here) through July 8.