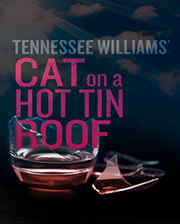 *Cat on a Hot Tin Roof is recommended for ages 13+. Please be advised that there are adult themes and brief strong language.*


I'll be ChiILin' at Drury Lane for the press opening July 12th. Check back shortly after for our full review. It's been a Tennessee season in Chi, IL. In the past few months I've caught Tennessee Williams' Suddenly Last Summer, and The Gentleman Caller, in which Williams is a main character. I'm eager to see Drury Lane's take on his infamous classic, Cat on a Hot Tin Roof.


The cast of Cat on a Hot Tin Roof is led by Genevieve Angelson (Maggie), who appeared as Nina in the 2013 Tony-nominated production of Vanya and Sonia and Masha and Spike. Angelson is also known for roles on Showtime’s House of Lies and Amazon’s original series Good Girls Revolt. The production also features Anthony Bowden as Brick and Matt DeCaro as Big Daddy. The role of Big Mama will be played by Cindy Gold (July 5-August 12) and Janet Ulrich Brooks (August 15-26). Rounding out the cast of Cat on a Hot Tin Roof are Michael Milligan (Gooper), Gail Rastorfer (Mae), Craig Spidle (Reverend Tooker), Joe Bianco (Doctor Baugh), Donica Lynn (Sookey), and Reginald Robinson Jr. (Lacey).

In the heat of the South under the gaze of patriarch Big Daddy, the expectations of marriage and family spoil. A birthday party brings a family's skeletons to the surface as each one fights over the bones. Cat on a Hot Tin Roof is well known for the 1958 film adaptation starring Elizabeth Taylor, Paul Newman, and Burl Ives which received six Oscar nominations, including Best Picture, Best Actor, Best Actress, Best Director, and Best Adapted Screenplay.

GENEVIEVE ANGELSON (Maggie) is quickly rising within in the ranks of Hollywood’s most exciting young, leading actresses. Her dynamic energy and emotional strength allow her to shine, and in 2016, she was named The Hollywood Reporter’s “Next Big Thing” and one of Variety’s “10 TV Stars to Watch.” Genevieve just wrapped the Pop TV series Flack, opposite Anna Paquin, and prior to that starred as the lead of Amazon’s hit drama Good Girls Revolt. Angelson has also starred opposite Rainn Wilson in the FOX crime comedy-drama series Backstorm as a young and idealist detective. Prior to that, she had a nine-episode arc in season three of the Showtime comedy House Of Lies, alongside Don Cheadle and Kristen Bell. Her previous television credits include guest appearances on Instinct and The Good Wife. In film, she will soon be seen in The Upside opposite Bryan Cranston. Angelson made a splashy Broadway debut as the endearingly innocent “Nina” in Christopher Durang’s Vanya And Sonia And Masha And Spike, opposite Sigourney Weaver and David Hyde Pierce. The play received numerous accolades, receiving six Tony Award nominations and winning Best Play at the 67th Tony Awards, Outstanding Play at the 58th Drama Desk Awards, and Best Play at the 2013 New York Drama Critics’ Circle Award. Angelson currently splits her time between Los Angeles and New York.
ANTHONY BOWDEN (Brick) has appeared Off Broadway and Regionally with Panther Creek, Signature Theatre, Long Wharf, Northern Stage, Exit, Pursued By A Bear, and The Educational Theatre of New York. He’s a founding member of ARTes, an arts education outreach program that works in El Salvador. Anthony is entering his final year at Juilliard.

MATT DECARO (Big Daddy) has been seen most recently at The Asolo Repertory Theater as LBJ in The Great Society, as Oscar Hubbard in The Little Foxes, and Gene in Frank Galati’s Rhinoceros. He appeared last season at Timeline Theatre in The Audience as Winston Churchill and Harold Wilson. Though a Chicagoan, Matt has been fortunate to play in theaters across the country including Lincoln Center, Manhattan Theatre Club, Goodman Theatre, The Guthrie Theatre, Steppenwolf Theatre, The Old Globe Theatre, and San Francisco's A.C.T. and internationally in Dublin, Toronto, and China. Some favorite roles include the Judge in David Mamet's Romance, Dave Moss in Glengarry Glen Ross, Boss Mangan in Heartbreak House, Boolie in Driving Miss Daisy, and Fa Hai in Mary Zimmerman's The White Snake. His TV and film credits include The Wise Kids, Eagle Eye, House, and The Office, among many others.

CINDY GOLD (Big Mama) returns to Drury Lane after playing Helga ten Dorp in 2016’s Deathtrap. She recently appeared with Chicago Shakespeare in the all-female Taming of the Shrew, directed by Barbara Gaines. She played Gertrude Stein in Frank Galati and Stephen Flaherty's Loving Repeating for which she won the Joseph Jefferson Award for Best Actress in a musical. Chicago area performances include: In the Garden at Lookingglass, directed by Jessica Thebus; About Face Theatre’s A Kid Like Jake, directed by Keirra Fromm; My Fair Lady at Lyric Opera, directed by Robert Carsen; Measure for Measure at The Goodman, directed by Robert Falls; and Awake and Sing at Northlight, directed by Amy Morton. Cindy performed in Showboat at The Lyric Opera, Chicago, and Washington, D.C. National Opera at the Kennedy Center, directed by Francesca Zambello, as well as The Daughter of the Regiment (where she shared a role with Justice Ruth Bader Ginsberg!) at the Kennedy Center in D.C. Other Chicago credits include: Love, Loss and What I Wore at Broadway in Chicago, Pride and Prejudice and Jekyll and Hyde at Northlight, and Moises Kaufman's 33 Variations workshop/About Face and Tectonic Theatre. Cindy appeared in The Music Man at Glimmerglass Opera Company, both in New York and at the Royal Opera House in Muscat, Oman. She was recently seen in the television dramas Empire, Chicago Fire, and the pilot episode of TNT's Leverage. Cindy will be seen in the fall at Victory Gardens in Indecent, directed by Gary Griffin. She is a Professor of Acting at Northwestern University Department of Theatre (former Head of Acting) and the Head of the Acting for Screen Module.

MICHAEL MILLIGAN (Gooper) has appeared at the Goodman Theater in Blind Date; Chicago Shakespeare Theater in Othello (Iago) and Tug of War; Greenhouse Theater in The American Mercy Tour; and American Theater Company in Mercy Strain. His Broadway credits include August: Osage County, La Bete, and Jerusalem. He appeared Off Broadway in Thom Pain, The Golem, and Mercy Killers. Michael has performed at the RSC, Shakespeare Theater, Guthrie Theater, McCarter Theater, Westport Country Playhouse, St. Louis Rep, Cincinnati Playhouse, and many more. His TV credits are Law and Order, Person of Interest, The Knick, Chicago Justice, and APB. He trained at Juilliard (John Houseman Prize recipient).

GAIL RASTORFER (Mae) has appeared regionally in The Curious Incident of the Dog in the Night-Time (Indiana Rep and Syracuse Stage); The Heidi Chronicles and The Game’s Afoot (Asolo Rep); Ten Chimneys and In the Next Room (Cleveland Playhouse); Noises Off (Clarence Brown Theatre); The Mousetrap (Maltz Jupiter Theatre); and Women in Jeopardy (Merrimack Rep). In Chicago, she has appeared at Chicago Shakespeare, Northlight, First Folio, Chicago Dramatists, The Goodman, American Blues, and The Unfortunates (SoloChicago, Jeff nomination for solo performance). TV credits include Chicago Fire, Crisis, Boss, Chicago Code, and dozens of national commercials.

Subscriptions for the 2018/2019 Season are priced from $157 to $187 and are currently on sale. Subscribers receive special offers on dining, flexible ticket exchanges, and early notification and priority seating for added events and concerts. For more information, visit DruryLaneTheatre.com.

About Drury Lane Theatre
Under the leadership of President Kyle DeSantis and Artistic Director William Osetek, Drury Lane Theatre is a major force in the Chicagoland theatre scene, presenting world-class productions in collaboration with some of the nation’s leading actors, artists, writers, and directors. Over the past 30 years, Drury Lane has staged more than 2,000 productions and has been nominated for more than 360 Joseph Jefferson Awards. Drury Lane is committed to breathing new life into beloved classics and introducing audiences to exciting new works.