OPENING: THE REVOLUTIONISTS & TIRESIAS WAS A WEATHERMAN Via Organic Theater Company of Chicago at the Greenhouse Theater Center

AWE-INSPIRING WOMEN STAND UP AND FIGHT BACK; OR,
WHICH IS WORSE, THE REIGN OF TERROR OR THE REIGN OF BIG PHARMA? 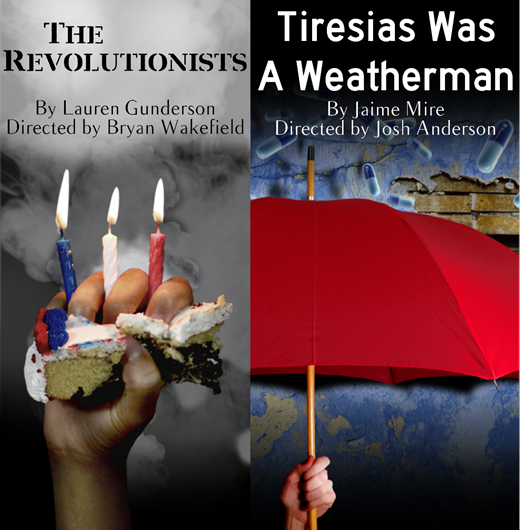 Organic Theater Company of Chicago returns to the Greenhouse Theater Center for its 2018 summer repertory season, May 29 - July 8. The Organic is committed to staging bold, relevant productions of classic, contemporary, and adapted works with a permanent group of artists over a sustained period of time.

This summer we continue our focus on women and present the works of two female playwrights. With THE REVOLUTIONISTS, we carry on telling more amazing stories of women from history that we started last summer with Lauren Gunderson’s EMILIE. This time the show features an all-female cast, and brings together four inspirational and (mostly) historical women in a modern, girl-powered perspective on the French Revolution. Jaime Mire’s new comedy TIRESIAS WAS A WEATHERMAN deals with timely issues of today such as mental health, pharmaceuticals, predatory media, and extreme weather, in a world where a minimal scientific alteration to your brain could potentially save both you and the world. Or at least that’s what they say …

THE REVOLUTIONISTS, a fast-paced, comedic quartet by 2017’s most produced playwright, follows four very real women who lived boldly in France during the French Revolution’s Reign of Terror. Former queen Marie Antoinette, playwright Olympe de Gouges, Jean-Paul Marat’s assassin Charlotte Corday, and Haitian rebel spy Marianne Angelle collide in this true story, total fiction, and play about a play. Join us for this passionate, poignant and decisive call to action through the true (and sometimes not) stories of these four extraordinary women.

TIRESIAS WAS A WEATHERMAN is a world premiere comedy about serious stuff. In this kinda-sorta adaptation of Sophocles’ classic ANTIGONE, playwright Jaime Mire imagines a world, parallel to our own, where human emotions have a direct connection to the weather. These events occasionally result in immediate and disastrous meteorological events. In a time when not taking your medication can lead to weather disaster (or can it?), would you consider implanting a microchip into your brain to help control these threatening emotions for public safety purposes?  How far are we willing to go to stay dry? Grab your umbrellas for this off-beat and touching comedy about family, mental health, and the weather.

Directed by company member Josh Anderson, TIRESIAS features company members Sara Copeland, Colin Jackson, Joel Moses, Laura Sturm, and artistic associate Adam Zaininger, all of whom appeared in last summer’s KING UBU, plus company member Will Burdin rejoins us after a summer off, having been seen with Organic most recently in the 2016 summer season in THE GOOD DOCTOR and OUT OF THE BLUE.  We welcome back Nyssa Loewenstein from our most recent production, WHY DO YOU ALWAYS WEAR BLACK? and John Arthur Lewis from last summer’s EMILIE.  Newcomers to the Organic stage are Shaina Schrooten and Taylor Raye (also appearing in THE REVOLUTIONISTS).


TIRESIAS WAS A WEATHERMAN

Purchase tickets online at www.organictheater.org or by calling the Greenhouse at
773-404-7336. Admission is $25 (Adults).

Posted by Bonnie Kenaz-Mara at 6:32 PM