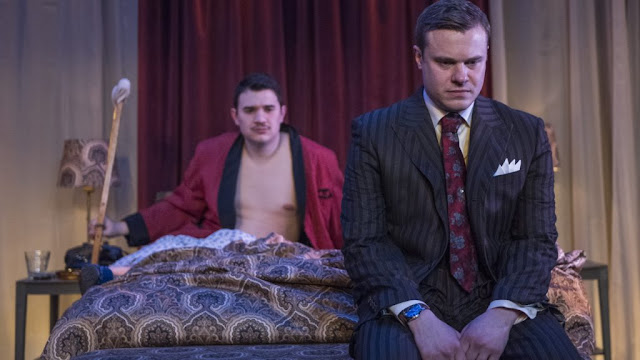 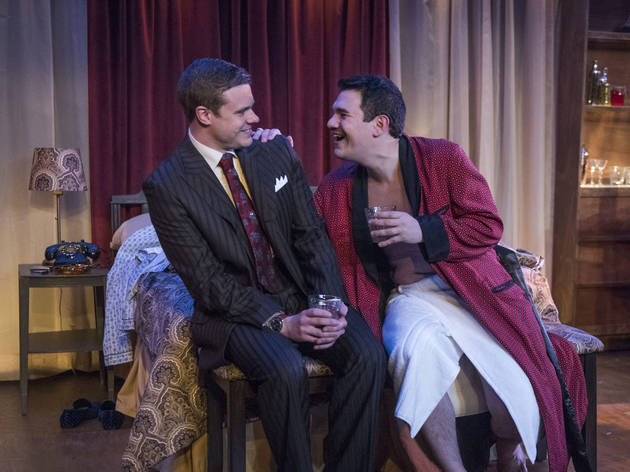 Review:
It's a rare treat to catch a glimpse into the lives of the pre-famous. THE GENTLEMAN CALLER does just that, inviting the audience into the 1944 lives of two struggling artists who were soon to change the face of American theatre, Tennessee Williams and William Inge.

We're privy to the future greats' first meeting, a botched interview slash seduction by unfulfilled teacher turned critic, Inge, and his subject, up and coming playwright Williams, who is at present still a starving artist and virtual unknown, blowing his meager earnings on binge drinking benders. Though seeming opposites in personality, as they get to know one another, the two sense a rare connection and depth of camaraderie in their respective works, and an undeniable sexual spark. The writing is at once playful and powerful, and Galvan and Jackson are a joy to see, embodying the iconic playwrights, as they battle their respective demons and embrace their destinies. 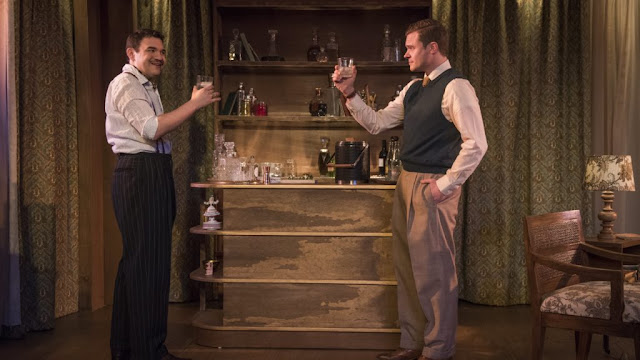 There's an enticing sense of history and back story playing out in this production, along with spot on universal truths about the artistic temperament, the downside of success, and the intensity of introspection, addiction and self loathing. It's a heady mix and a must see. Highly recommended. 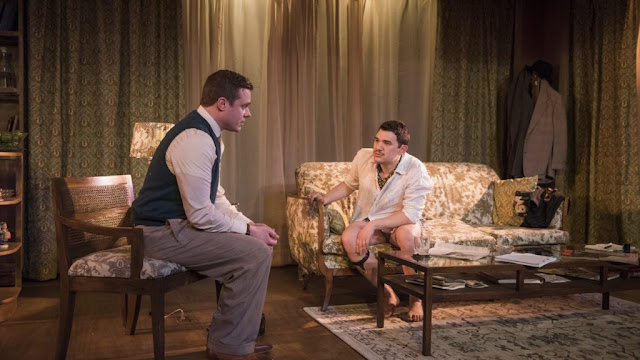 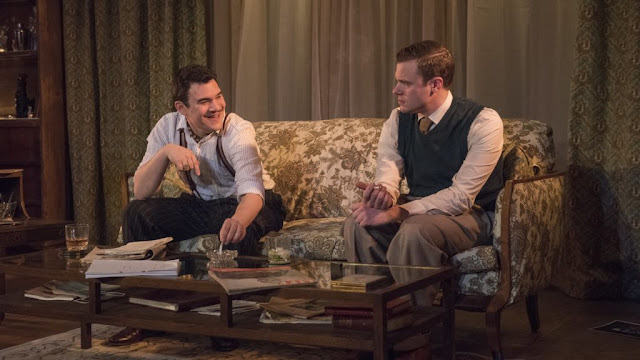 In the microcosm of Chicago's theatre scene, accidental coincidences in programming and intentional themes happen. Either way, we're elated that productions Tennessee Williams' Suddenly Last Summer at Raven in May and an entire season of William Inge at Eclipse, are so closely following the opening of Raven's excellent world premiere of THE GENTLEMAN CALLER. Check out the details at Raven Theatre's site and at Eclipse Theatre.

Raven Theatre’s World Premiere of
THE GENTLEMAN CALLER
By Philip Dawkins
Directed by Artistic Director Cody Estle
Extends Through May 27, 2018

After selling out more than half its run prior to opening, Raven Theatre is pleased to announce a two week extension for its world premiere of Philip Dawkins’ provocative drama THE GENTLEMAN CALLER, directed by Artistic Director Cody Estle, now playing through May 27, 2018 in Raven’s intimate 55-seat West Stage, 6157 N. Clark St. (at Granville) in Chicago. Tickets for all performances are currently available at www.raventheatre.com or by calling (773) 338-2177. 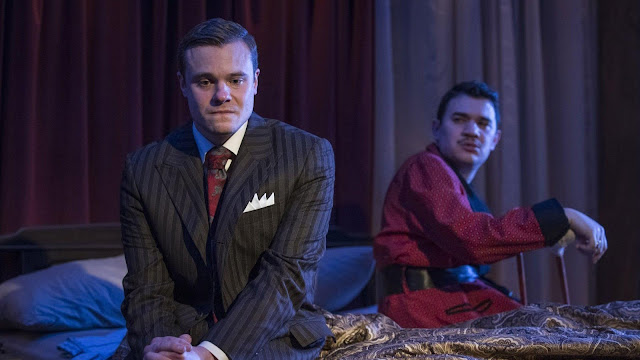 Although now regarded as two of history's finest American playwrights, back in 1944, William Inge and Tennessee Williams had yet to experience anything close to success. Before the Chicago premiere of The Glass Menagerie, Inge, a dissatisfied newspaper critic, invites Williams to his St. Louis apartment for an interview. This fraught, sexy rendezvous sparks a relationship which radically alters the course of their lives and the American Theatre.

Comments Raven Artistic Director Cody Estle, “I am thrilled to bring Raven Theatre its first commissioned play in 35 years, and even more excited to be working with the exceptionally talented Philip Dawkins. The Gentleman Caller is based on the true story of the meeting, friendship and sexual tryst of Tennessee Williams and William Inge. Philip has written a play that poignantly depicts two writers struggling to find their purpose and grappling with the consequences of that purpose. It’s both intoxicating and harrowing – much like the lives of Williams and Inge. Philip’s writing is a gift, and I’m delighted to have this phenomenal team bring his play to life.”

Curtain Times: Thursdays, Fridays and Saturdays at 8 pm; Sundays at 3:30 pm. Please note: there will not be a performance on Thursday, April 5.

Tickets: Regular run $46 ($43 if purchased online). Seniors/teachers $41 ($38 if purchased online). Students/active military and veterans $15. Every Thursday is “Under 30 Thursday,” when patrons under age 30 can purchase tickets for $15. Single tickets and season subscriptions for the 2018-19 Season are currently available at www.raventheatre.com or by calling (773) 338-2177.

About the Artists
Philip Dawkins (Playwright) is a Chicago playwright whose plays have been produced throughout the country and the world. His works Miss Marx: or The Involuntary Side Effect of Living (Strawdog Theatre) and Charm (Northlight Theatre at the Steppenwolf Garage) both won the Joseph Jefferson Award for Best New Work. His critically-acclaimed plays The Homosexuals, Le Switch (both produced by About Face Theatre) and Failure: A Love Story (Victory Gardens Theater), all received Joseph Jefferson Nominations for New Work, and he is the recipient of Joseph Jefferson Award for Best Solo Performance for his play, The Happiest Place On Earth (Side Show Theatre). His play, Charm, received its extended New York premiere with MCC this last year. Philip is an artistic associate at About Face Theatre, Side Show Theatre and MC-10 as well as an ensemble playwright at Victory Gardens Theater. He teaches playwriting at Northwestern University as well as at his alma mater, Loyola University Chicago.

Cody Estle (Director) is the newly appointed Artistic Director of Raven Theatre. Directing credits include Five Mile Lake at Shattered Globe Theatre; By The Water at Northlight Theatre; The Assembled Parties, A Loss of Roses, Dividing the Estate, Vieux Carré (named by Chicago Tribune as one of the Year's Best in 2014), Good Boys and True, Brighton Beach Memoirs, Boy Gets Girl and Dating Walter Dante at Raven Theatre; American Hero at First Floor Theatre; Scarcity at Redtwist Theatre; The Seagull and Watch on the Rhine at The Artistic Home; Don't Go Gentle at Haven Theatre; Uncle Bob at Mary-Arrchie Theatre Company and Hospitality Suite at Citadel Theatre. He’s had the pleasure of assistant directing at Steppenwolf Theatre, Northlight Theatre, Marriott Theatre, Goodspeed Musicals, Court Theatre, Writers Theatre, Next Theatre and Strawdog Theatre. Estle is an associate member of SDC and a graduate of Columbia College Chicago.