REVIEW: Sugary Taste of Things To Come Is Sweet But Lacks Substance

Review of “A Taste of Things to Come”
By Catherine Hellmann, guest reviewer 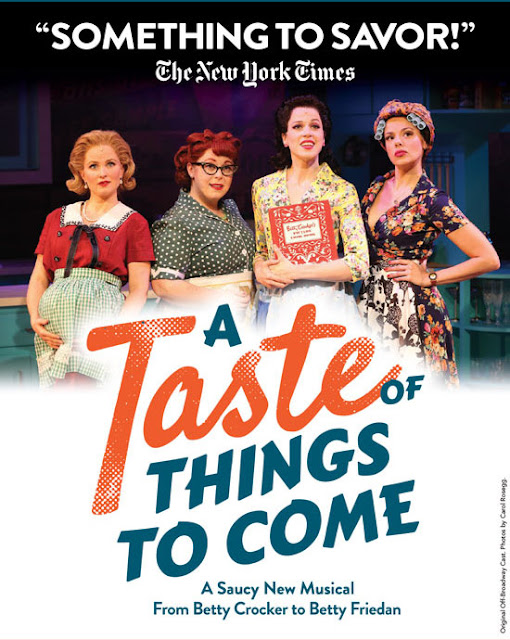 This philosophy of life guides housewife extraordinaire and mother of six (and counting?) Dottie O’Farrell, the cliche, harried, over-the-top mom in the cast of four female friends in A Taste of Things to Come. Maybe the ushers should hand out sundaes at intermission; the show needs something.

Oh, it is an adorable show, don’t get me wrong, and probably a crowd-pleaser for those who want a fun, light, amusing musical about women friendships. But the storyline is as sugary as whip cream and largely predictable, as are the other three characters as well: Joan Smith, the happily married hostess with modest career ambitions of being a writer, Connie, the very pregnant, unhappily married friend, and single Agnes, who dreams of escaping their Illinois suburb for New York, fame, and fortune.

Act One opens in the 1950’s in Winnetka where the ladies are planning to enter, and hopefully win, the Betty Crocker cooking contest. (According to my mom, who actually raised children in the 1950’s, all the women in her neighborhood were way too busy with their families to ever meet other ladies for a cooking/gossip/wine session. Ok, it is theater/fantasy and not necessarily based on fact...)  The musical numbers are delightful and cleverly staged. I especially liked the tribute to “Dear Abby” and the gossippy “Didja Hear?” Agnes dreams and sings “I’m Outta Here,” while the ladies blend some adult beverages into their cooking with “Happy Hour.”

Act Two jumps ahead ten years into the 60’s so Joan can wear her short skirt and white go-go boots, and her friends can enter her pad with the groovy beads in the doorway. (There is a wonderful bit where Dottie falls out of Joan’s giant beanbag chair.) Each of the quartet is a “type” of female fulfillment. Joan is still happily married and writing, Connie, minus the husband,  lives out of the country with her beau and their biracial baby (radical!), and Agnes has followed her heart to NYC where she has succeeded in tv soap operas (and discovered her secret Latina heritage--huh?). Then there is sweet Dottie, the PTA president, feeling marginalized and unimportant with her growing family, next to her accomplished friends.

By the end, this very-disparate group of friends will bond once more, (Who is really still close with their high school friends or has anything in common with them two decades later? Ok, I am being a realist again...) and affirm everyone’s choices, pointedly singling out Dottie that having a family/being a mom is an excellent career in itself. It’s like we are being reminded: The women’s movement was about choices! Joan, you have it all; it’s ok you don’t have children! Agnes, career girl without a man! Connie, you and your multicultural family unit are welcome back to the U.S.! Ugh.

The cast does an exceptional job pulling off a cheesy plot. They are very talented women with impressive bios. Libby Servais, as Connie, just finished a run as Glinda in Wicked on Broadway. Cortney Wolfson has been in Kinky
Boots on Broadway and is wonderful as Joan, our hostess. Linedy Genao, as Agnes, returns to Chicago where she professionally debuted in  On Your Feet! at the Oriental Theater. Marissa Rosen as Dottie is especially adorable; she just did a production of The Marvelous Wonderettes Off-Broadway.

Another stand-out is the band itself, comprised of all women musicians,
which is rare and super-cool for a show about female empowerment. That was one aspect of the show which seemed truly radical and made a serious statement; I just wish the storyline about the strengths of women had more breadth and texture...and less sugar.

Broadway In Chicago and the producers of A TASTE OF THINGS TO COME are delighted to announce that individual tickets for A TASTE OF THINGS TO COME, a slice-of-life original musical comedy, will go on sale tomorrow, Wednesday, Jan. 17, 2018. This delicious musical makes its Chicago debut at Broadway In Chicago’s Broadway Playhouse at Water Tower Place (175 E. Chestnut) for a limited six-week engagement March 20 through April 29, 2018.

THE 1950s: It’s the beginning of rock n’ roll, the racial barrier begins to crack, the Korean War is over, and husbands are returning home. Ronald Reagan is a model for Lifebuoy Soap and Rock Hudson is “the World’s Most Eligible Bachelor.”
And women are getting antsy.

Meet Joan, Connie, Dottie, and Agnes. Four best friends living in Winnetka, IL. They meet every Wednesday for a Betty Crocker cooking contest, imagining how the prizes might change their lives. Their weekly gathering isn’t just about cooking, but a time to confide secrets and share frustrations.

Usually, it’s LIFE Magazine that’s read cover to cover in between mixing, sifting, and chopping. However, a different kind of reading material arrives. Shocked but inspired by the Kinsey report, their lives take an interesting turn.

A TASTE OF THINGS TO COME is a fabulously fun romp tracing the changing lives of these four Winnetka women from the 1950s to the sexual revolution of the 1960s. This homage to prior generations of women who blazed new trails features a rollicking original score of ‘50s and ‘60s music with great harmonies, all backed by an all-female rock n’ roll band.

Written by Debra Barsha and Hollye Levin, with direction & choreography by Lorin Latarro, A TASTE OF THINGS TO COME is a slice-of-life original musical comedy following four friends whose Betty Crocker cooking club becomes a turning point in their lives. 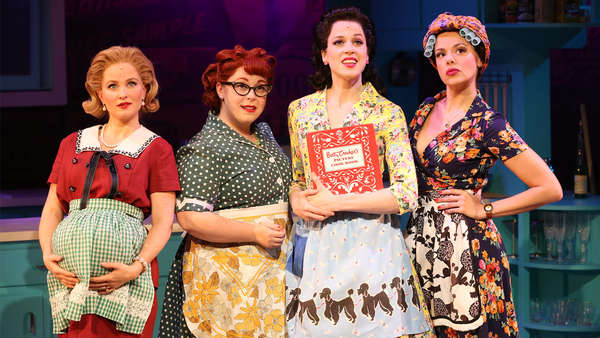 Posted by Bonnie Kenaz-Mara at 9:30 AM

Email ThisBlogThis!Share to TwitterShare to FacebookShare to Pinterest
Labels: A Taste of Things to Come, Broadway in Chicago, Broadway Playhouse, Catherine Hellmann, review, shows on our radar, Theatre Chicago