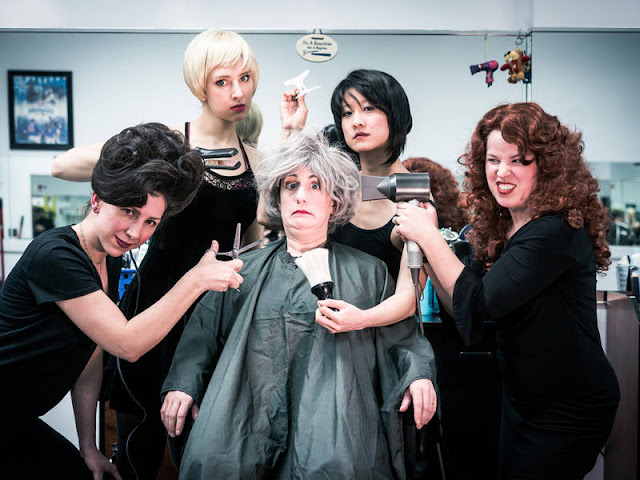 I'll be out for the press opening on March 22nd, so check back soon for my full review. I adore black comedies, especially when they feature women. I'm bringing a hairdresser friend along for this one, and we can't wait. As a half Swede/half German in heritage, I'm particularly fond of Akvavit and their mission statement of "Seeking the universal through the voices of contemporary Nordic playwrights"

In this black comedy, five women play 28 characters as they work through the absurdities and trials of trying to be a "good girl" in modern society: a professional success, a perfect mother, the right kind of feminist. BAD GIRLS: THE STYLISTS follows four hairstylists in a salon, trying to grow their business in a competitive field. In a series of hilarious and tragic scenes, the stylists lend their ears and their scissors to a parade of customers. They make up their hair, their faces, and give shape to the stories about who they are. But with the arrival of a mysterious stranger, life in the salon starts to get complicated – and dangerous. As the women's stories begin to unravel, the play examines what we owe to ourselves and each other, the difficulty of forming true connections, and all the ways in which we fail.

BAD GIRLS: THE STYLISTS is a Danish comedy about four hair stylists and one peculiar patron, mysteriously named "A."  Five actors play 28 roles in this madcap dark comedy that examines the intersection of identity and appearance, what it means to be female, and the creative process. 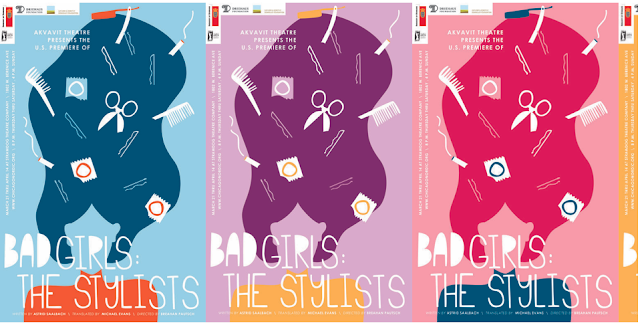 
About the Artists
Astrid Saalbach (Playwright) was trained as an actress at the Danish National School of Theatre from 1975 to 1978. She has received several awards including the Danish dramatist’s honor award and the lifelong grant of the Danish art fund.

Michael Evans (Translator) went to Norway as an exchange student and just stayed there. Since the 1980s he has been working as a dramaturg at the Rogaland Theatre in Stavanger, where he has overseen four productions of Saalbach’s plays. His English translations of her plays have been seen in London, Chicago, Guelph and Toronto. His most recent translation was of Arthur Miller’s Death of a Salesman for the Norwegian National Theatre.  His textbook Innføring I Dramaturgi is widely used in Scandinavia and is currently in it’s fifth printing.

Breahan Eve Pautsch (Director) is originally from Chippewa Falls, Wisconsin. She earned her BA in Theatre and English at UW-Madison and has been working in Chicago as an actor and director since 2003. She has been a company member with Akvavit Theatre since 2011, where she served as Literary Manager and Director of Development for several years before taking the position of co-Artistic Director at the beginning of 2017. She is also a company member with Indie Boots Theatre. As a director, she has worked with Akvavit, Raven Theatre, Wildclaw Theatre, The International Voices Project, Hobo Junction Productions, Full Voice Productions, Mudgeonsoul Cinema, Broken Nose Theatre and Stockyards Theatre Project.

Posted by Bonnie Kenaz-Mara at 2:10 PM