OPENING: Chicago Premiere! of YOU FOR ME FOR YOU Via Sideshow Theatre Company at Victory Gardens Theater

Chicago Premiere!
Sideshow Theatre Company Presents
YOU FOR ME FOR YOU
By Mia Chung
Directed by Ensemble Member Elly Green 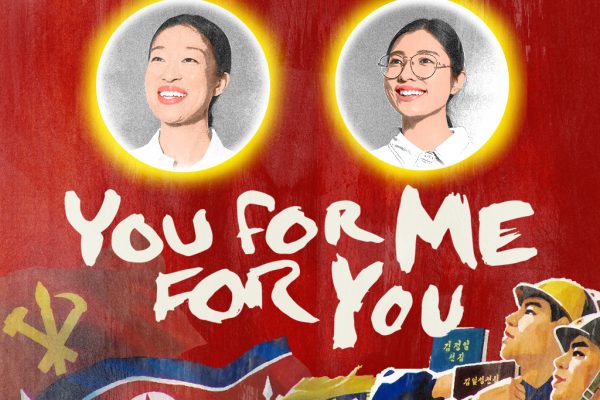 Sideshow Theatre Company is pleased to launch its eleventh season with the Chicago premiere of Mia Chung’s absurdly inventive smash-hit YOU FOR ME FOR YOU, directed by ensemble member Elly Green*, playing March 4 – April 8, 2018 at Victory Gardens Richard Christiansen Theater, 2433 N. Lincoln Ave. in Chicago. Tickets are currently available at www.victorygardens.org, by calling (773) 871-3000 or in person at the Victory Gardens Box Office.

I'll be ChiILin' at Chi, IL's Victory Gardens Richard Christiansen Theater for the press opening of YOU FOR ME FOR YOU on March 8th, so check back soon for my full review.

Two North Korean sisters plan an elaborate escape from the “Best Nation in the World,” only to be separated at the border. Now in two strange and separate worlds filled with outrageous characters, they must navigate barriers of language and bureaucracy, reckon with the ways that culture and country can shape us, and discover that survival requires sacrifice. Playwright Mia Chung weaves myth and striking imagery into a deeply affecting and surprisingly funny adventure, portraying the endless lengths to which two sisters will go to find one another again.

Artistic Director Jonathan L. Green comments, “Mia's play is one we've been chasing for a few years. You for Me for You is fast-moving, funny and daring; in the hands of Sideshow's Elly Green, it's going to be a tour de force.”

Mia Chung’s (Playwright) plays include You For Me For You, Catch as Catch Can and This Exquisite Corpse. She recently received the Stavis Playwright Award, the Frederick Loewe Award in Music-Theatre, and a Playwrights’ Center Jerome Fellowship. You For Me For You had a UK premiere at The Royal Court Theatre, a U.S. premiere at Woolly Mammoth Theatre, and multiple productions around the U.S., including Company One (Boston), Crowded Fire Theater (San Francisco), InterAct (Philadelphia), Mu Performing Arts/Guthrie Theater (Minneapolis), Portland Playhouse (Oregon); the play is published by Bloomsbury Methuen Drama. In 2018, the play will run in Chicago, Michigan, and upstate NY. Mia’s work has been supported by awards, commissions, fellowships, residencies and workshops, including BAPF, Berkeley Rep Ground Floor, Blue Mountain Center, Civilians’ R&D Group, Hedgebrook, Huntington Theatre, Icicle Creek, Inkwell, JAW, LAByrinth, Ma-Yi Writers Lab, NEA, Playwrights Realm, RISCA, South Coast Rep, Southern Rep, Stella Adler Studio, and TCG. During the coming year, she will develop work with the support of the Orchard Project, P73, NYTW and the Playwrights’ Center. She is a New Dramatist.

Elly Green (Director) is a freelance director, whose previous work with Sideshow includes the co-world premiere of Hansol Jung’s No More Sad Things and a Freshness Initiative workshop series of Janet Burroway’s Boomerang. She recently directed The Distance by Deborah Bruce for Haven Theatre and After Miss Julie by Patrick Marber for Strawdog Theatre. Other Chicago credits include: The Woman Before (Trap Door), Rabbit (Stage Left – Jeff nominated), Happy (Redtwist), Unwilling and Hostile Instruments (Theatre Seven) and The Tomkat Project (Playground Theatre & NY Fringe). Elly was assistant director on Henry V (Chicago Shakespeare Theater) and Proof (Court Theatre). She is an artistic associate with Stage Left theatre and a reader for Steppenwolf theatre. Elly originally trained in London on the MFA in Theatre Directing from Birkbeck College. Her UK directing credits include: Our Country’s Good, My Balloon Beats Your Astronaut, Beyond Therapy, About Tommy, Copenhagen, Skylight, The Beach and The Zoo Story. ellygreendirector.com.

Sideshow is also the producer of Chicago League of Lady Arm Wrestlers (CLLAW), a wildly popular fundraiser held in benefit of Sideshow Theatre Company and other local community organizations. CLLAW has been featured in local and national press, including The Washington Post, Reuters, Penthouse Magazine and the Chicago Sun-Times and on WGN Morning News, ABC 7’s Windy City Live and CBS 2. For more information about CLLAW, visit cllaw.org.

Email ThisBlogThis!Share to TwitterShare to FacebookShare to Pinterest
Labels: Chicago premiere, opening, shows on our radar, Sideshow Theatre Company, Theatre Chicago, Victory Gardens Theater, YOU FOR ME FOR YOU