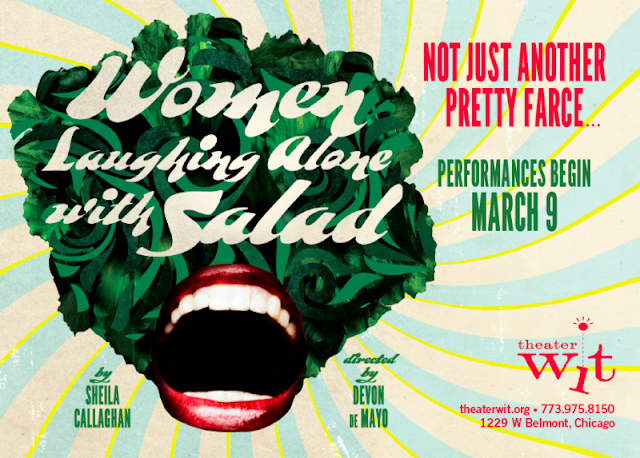 ChiIL Mama will be out for the press opening on March 20th. I can't wait to catch what's sure to be a humorous, feminist look at the absurd ideals women face in media and in life. And in other great news, not only does this show promise to serve up big laughs, it comes with an immediate side of economic justice!

Single tickets to Women Laughing Alone with Salad are $12-$70.

However, tickets for women to all regular performances will be discounted to match the 79% wage gap between men and women in Illinois.

Theater Wit is tossing up a crisp Chicago premiere of Women Laughing Alone with Salad, Sheila Callaghan’s satirical comedy based on the meta-feminist Internet meme of the same name. 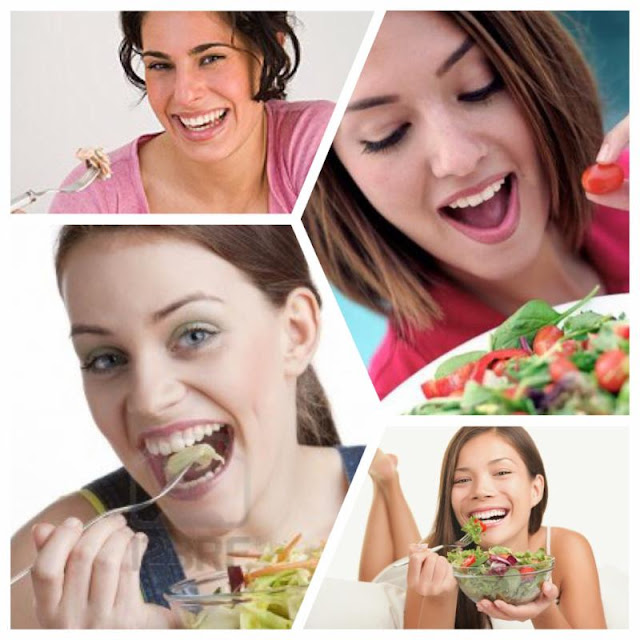 Previews of Women Laughing Alone with Salad are March 9-18: Thursday, Friday and Saturday at 8 p.m., Sunday at 3 p.m.

Performances run through April 29: Thursday, Friday and Saturday at 8 p.m., Sunday at
﻿3 p.m.

Theater Wit is located at 1229 N. Belmont in Chicago’s Lakeview neighborhood. Another great way to secure seats is to sign up for a Theater Wit Membership, an “all the theater you can eat” deal that lets you see as many plays as you want in any of Wit’s three spaces for a low monthly fee of $29/$22 for students, along with many member perks.

To purchase single tickets, a Membership, or to inquire about Flex Passes, visit TheaterWit.org or call 773.975.8150.

You’ve seen them a hundred times before. Stock photos of attractive women, sitting alone, enjoying a salad so hilarious they can’t help but explode with laughter and delight.

The proliferation of this absurd cliché caught the attention of the Internet in 2011 after Edith Zimmerman posted the first collection on the feminist blog The Hairpin. Titled “Women Laughing Alone With Salad,” it featured 18 photos illustrating this trend with no accompanying text.

Zimmerman’s post spurred a number of hilarious memes parodying this stereotypical portrayal of women in media, including a tumblr page.

And this play, a fierce, funny, feminist look at the maniacal gauntlet of gender relations and the relentless pursuit of insane ideals. Our heroines are trapped on a treadmill of dysfunctional relationships, warped body image and ludicrous pornography, carving their way through a suffocating, tangled mess. With pointed jabs and razor wit, Women Laughing Alone with Salad disembowels the cosmetic myth of pre-packaged feminine empowerment.

When it debuted at Washington D.C.’s Woolly Mammoth Theatre in 2015, playwright Sheila Callaghan, also a writer/producer on the hit Showtime comedy Shameless, told the Washington Post, “Nobody likes salad that much. And the notion that you’re supposed to feel that way – salad will never be that kind of satisfying. No matter how creative you get with salad, it’s still (expletive) lettuce and vegetables, right?”

DC Theatre Scene subsequently hailed Women Laughing Alone with Salad a “fresh, funny play…the poster child for what feminist theatre should be: a great night out on the town watching a slam bam comedy which is also a serious conversation about the society we oh-so-currently live in.”

Salad Days @ Theater Wit:
Behind the scenes of Women Laughing Alone with Salad 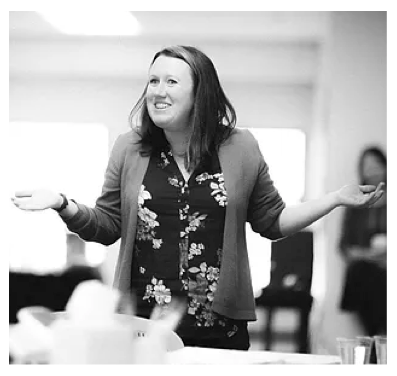 Here in Chicago, Devon de Mayo (pictured above) makes her Theater Wit directorial debut with Women Laughing Alone with Salad, fresh from staging the world premiere of The Burn by Philip Dawkins for Steppenwolf Theatre for Young Audiences. Other recent projects include Harvey at Court Theatre, You On the Moors Now by Jaclyn Backhaus for The Hypocrites, the world premiere of Sycamore at Raven Theatre and Don't Look Back/Must Look Back at Pivot Arts.

Echaka Agba (Meredith/Bruce) was named to the Chicago Tribune’s “Hot New Faces of Chicago Theater, Class of 2017”), and singled out in the 2017 Time Out Chicago Theater Awards for featured performance and breakout performance in Broken Nose Theatre’s At the Table, which also won her the Jeff Award for Best Supporting Actress. Other credits are Short Shakes! Romeo and Juliet at Chicago Shakespeare, United Flight 232, Jeff Award winner for Best Ensemble at House Theatre, and The Crucible and Between Riverside and Crazy at Steppenwolf.

Japhet Balaban (Guy/Alice) was also named to the Chicago Tribune’s “Hot New Faces of Chicago Theater, Class of 2017”), drawing particular attention for his work in Ideation (Jackalope Theatre). Other credits are You on the Moors Now (The Hypocrites), Posh (Steep Theatre), Never The Sinner (Victory Gardens), Balm in Gilead (Griffin Theatre) and Look Back in Anger (Redtwist).

Jennifer Engstrom (Sandy/Guy) is a veteran of regional and Chicago stages and an A Red Orchid Theatre ensemble member, where she performed in The Fastest Clock in The Universe, Eric LaRue, Fatboy, The Hothouse, 3C and The Mutilated (Jeff nomination for Outstanding Actress). 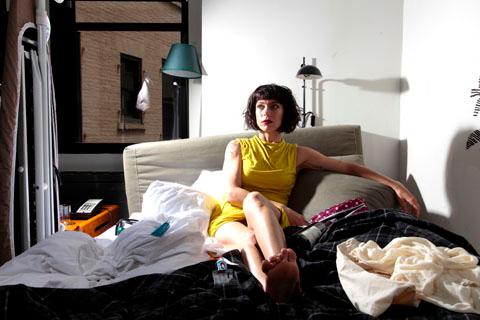 Sheila Callaghan's plays have been produced and developed with Soho Rep, Playwright's Horizons, Yale Rep, South Coast Rep, Clubbed Thumb, The LARK, Actor's Theatre of Louisville, New Georges, The Flea, Woolly Mammoth, Boston Court and Rattlestick Playwright's Theatre. She received the Princess Grace Award for emerging artists, a Jerome Fellowship from Playwright's Center in Minneapolis, a MacDowell Residency, a Cherry Lane Mentorship Fellowship, the Susan Smith Blackburn Award and the Whiting Award. Her plays have been produced internationally in New Zealand, Australia, Norway, Germany, Portugal and the Czech Republic. These include Scab, Crawl Fade to White, Crumble, We Are Not These Hands, Dead City, Lascivious Something, Kate Crackernuts, That Pretty Pretty; Or, The Rape Play, Fever/Dream, Everything You Touch, Roadkill Confidential, Elevada and Bed. She is published with Playscripts.com and Samuel French, and several of her collections are published with Counterpoint Press. She has taught playwriting at Columbia University, The University of Rochester, The College of New Jersey, Florida State University and Spalding University. She is an affiliated artist with Clubbed Thumb, a member of the Obie winning playwright's organization 13P and an alumni of New Dramatists. In 2010, Callaghan was profiled by Marie Claire as one of "18 Successful Women Who Are Changing the World." She was also named one of Variety’s "10 Screenwriters to Watch" of 2010. Callaghan is a writer/producer on the hit Showtime comedy Shameless and a founder of the feminist activist group The Kilroys. She was nominated for a 2016 Golden Globe for her work on Hulu’s Casual and a 2017 WGA Award for her Shameless episode “I Am A Storm.”


About Theater Wit
Theater Wit, Chicago’s “smart art” theater, is a major hub of the Chicago neighborhood theater scene, where audiences enjoy a smorgasbord of excellent productions in three, 99-seat spaces, see a parade of talented artists and mingle with audiences from all over Chicago.

“A thrilling addition to Chicago’s roster of theaters” (Chicago Tribune) and “a terrific place to see a show” (New City), Theater Wit is now in its eighth season at its home at
1229 N. Belmont Ave., in the heart of the new Belmont Theatre District in Chicago’s Lakeview neighborhood. In 2014, Theater Wit was awarded the National Theatre Award by the American Theatre Wing for strengthening the quality, diversity and dynamism of American theater.

The company’s most recent hits include The Antelope Party by Eric John Meyer, This Way Outta Santaland by Mitchell Fain, 10 Out of 12 and Mr. Burns, a post-electric play by Anne Washburn, Naperville by Mat Smart, The New Sincerity by Alena Smith, Bad Jews by Joshua Harmon, The (curious case of the) Watson Intelligence and Seven Homeless Mammoths Wander New England by Madeleine George, and Completeness and The Four of Us by Itamar Moses.

Visit TheaterWit.org or call the Theater Wit box office, 773.975.8150, to purchase a Membership, inquire about Flex Pass options or to buy single tickets.

﻿To receive an “artisanal selection of consonants and vowels from Theater Wit,” sign up at TheaterWit.org/mailing for exclusive updates, flash deals and behind-the-scenes production scoop every few weeks.

Posted by Bonnie Kenaz-Mara at 1:28 PM