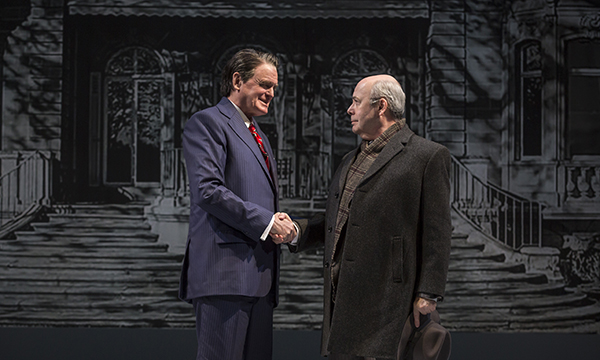 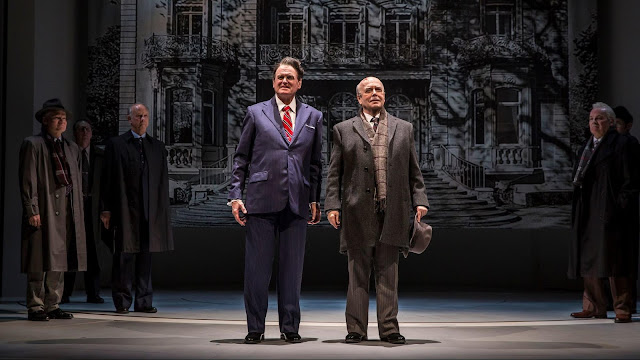 The scene opens on a utilitarian, blandly bureaucratic looking building with curved walls that opens to reveal worlds within worlds. This clever bit of set design is transformed by creative lighting into gorgeous interior and exterior spaces in The Whitehouse, Russia, and neutral ground. 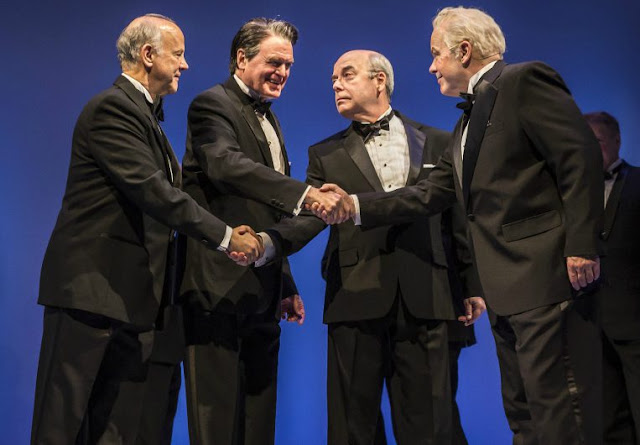 In a similar vein, the bland external trappings of past political talks between Ronald Reagan (Rob Riley) and Mikhail Gorbachev (William Dick) are revealed on stage with a compelling mix of fact and creative license. Expect a psychologist's treasure trove of nonverbal communication and power plays, and a Book of Mormon worthy dose of Hollywood pop culture wisdom reframed as life lessons. 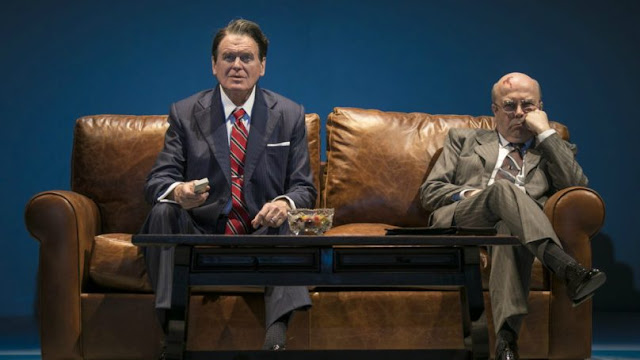 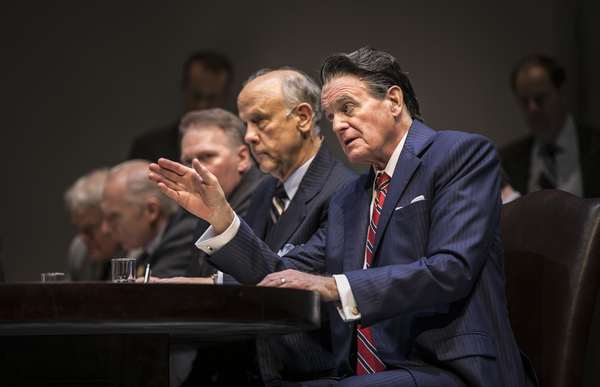 My favorite characters were the wives, who come across as the true power players behind their infamous husbands. 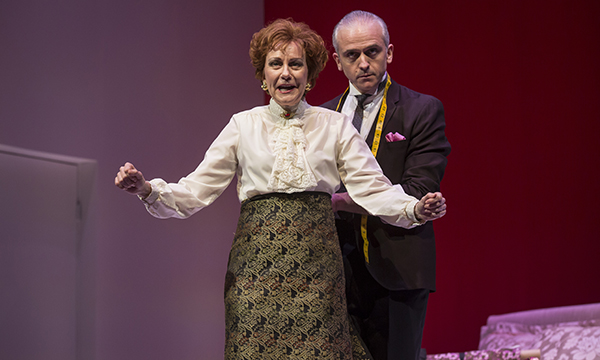 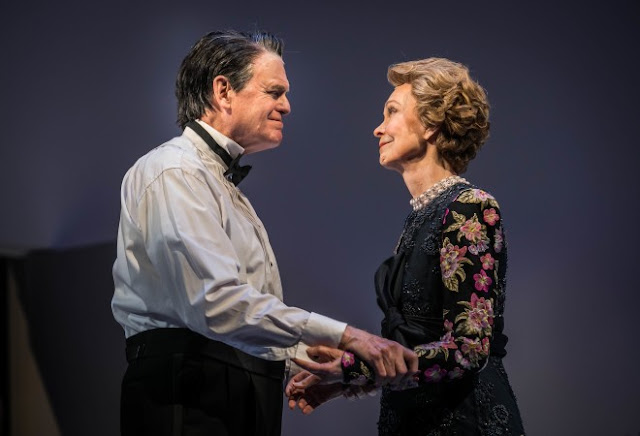 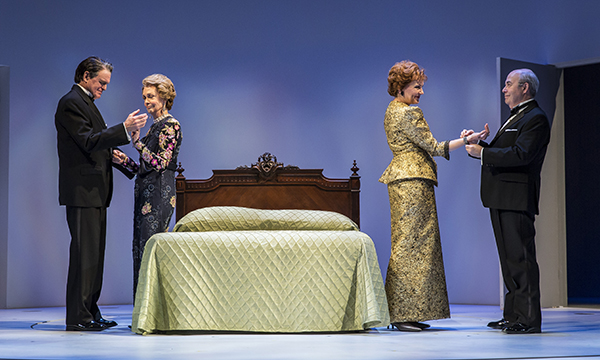 At least in this production, these two brilliant and scheming women, Nancy Reagan (Deanna Dunagan) and Raisa Gorbachev (Mary Beth Fisher ) call the shots on their ruling class husbands’ arrival times, dress, and nonverbal negotiations. I find it quite plausible that this was the power dynamic for these two couples in real life as well.

Don't miss this fascinating foray into the drama of politics and the politics of drama. Recommended. Now playing on the main stage at Goodman Theatre through February 25th, 2018.

Approximate running time: 2 hours and 30 minutes
including one intermission.

Blind Date, Rogelio Martinez’s slyly comic, behind-the-scenes glimpse of two of the most powerful world leaders—Ronald Reagan and Mikhail Gorbachev—directed by Goodman Theatre Artistic Director Robert Falls. Martinez, “a fresh and funny talent” (Backstage) who “finds new twists on old topics” (Variety), continues his multi-play exploration of the Cold War Era with this Goodman world premiere, which features as characters some of the figures who shaped the political landscapes of the 1980s and beyond. In an era before Twitter, Tinder and 24/7 news, Ronald Reagan (Rob Riley) and Mikhail Gorbachev (William Dick) seek to thaw the seemingly intractable tension between the United States and Soviet Russia. Despite their advisors’ best efforts to keep them on track, a crafty game of one-upmanship ensues, as the world’s two most powerful leaders eschew conventional protocols to discuss pop culture and old movies—while Nancy Reagan (Deanna Dunagan) and Raisa Gorbachev (Mary Beth Fisher ) mirror their husbands’ negotiations in a passive-aggressive tango over tea and fashion choices.


Following Blind Date, Falls will direct a new production of Henrik Ibsen’s An Enemy of the People (March 10 – April 15, 2018) at the Goodman, and also remount his Lyric Opera of Chicago production of Mozart’s Don Giovanni for the Dallas Opera (April 2018). Most recently, Falls directed the world premiere of Jim McGrath’s Pamplona, starring Stacy Keach as Ernest Hemingway, and a new production of Annie Baker’s adaptation of Uncle Vanya at the Goodman.

JPMorgan Chase is the Major Corporate Sponsor, Goodman Theatre Women’s Board is the Major Production Sponsor and the Chicago Tribune is the Media Partner. Blind Date earned a New Play Award by the Edgerton Foundation. Time Warner is the Lead Supporter of New Play Development for the 2017/2018 season. 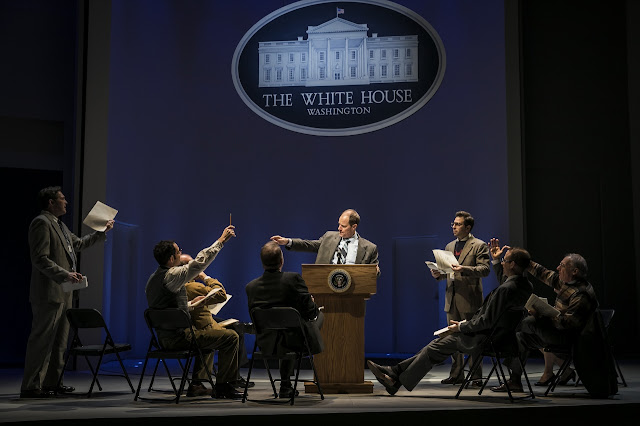 “My interest in the Cold War is, in some ways, my desire to understand who I was before arriving here, and who I became after,” said playwright Rogelio Martinez, who grew up in Cuba not long after the 1962 Cuban Missile Crisis and conducted countless hours of research to develop this production. “This is not speculative fiction, not a ‘what if’ story, the events in the play did occur, but maybe not exactly in the same way as they occur on stage. It’s my job to present a set of characters and let audiences arrive at a conclusion of their own. I hope audiences will leave the theater with some hope and not just hope but agency—they as individuals can do something about today’s problems.” 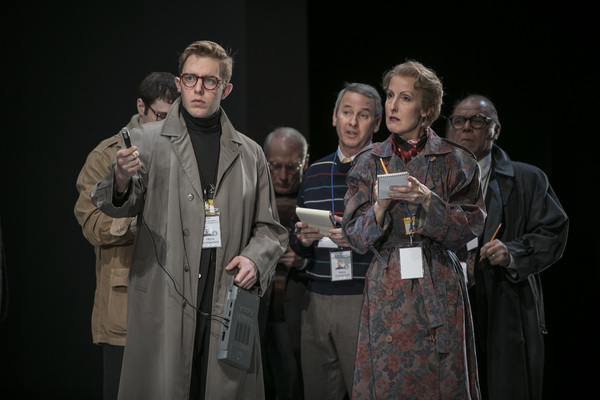 After receiving an Alfred P. Sloan Foundation New Science and Technology Initiative Grant, Martinez wrote When Tang Met Laika, a post-Cold War space exploration play that was subsequently produced by the Denver Center. This inspired him to bring the Cold War itself on stage in a three-play cycle about the time period—Ping Pong, the first play in the trilogy, is about U.S.-China relations during the Nixon administration and was presented at The Public Theater. The second play, Born in East Berlin, tackled the impact a Bruce Springsteen concert had on East Germans just prior to the fall of the Berlin Wall. The play was workshopped at the Atlantic Theater Company and has since been translated into both Hungarian and Romanian. The Goodman production marks the conclusion of the trilogy. 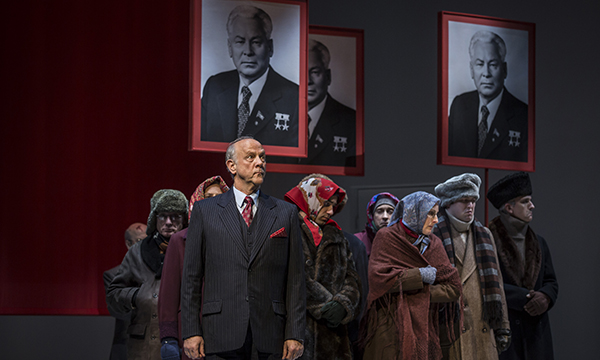 ICONS & ARTISTS – January 28 at 2pm | The Alice Center for Education and Engagement at Goodman Theatre
Tickets are $35 and includes a 2pm performance, reception, followed by an in-depth conversation with the playwright Rogelio Martinez and director Robert Falls about the production.

THE HALF-LIFE OF LEADERS – February 11 at 4:45pm | The Alice Center for Education and Engagement at Goodman Theatre
Join the Bulletin of Atomic Scientists and Goodman Theatre artists for a post-show discussion about the production and the divide between nuclear research and the leaders who decide foreign policy.

Audiences can save more with Goodman Theatre’s new MEMBERSHIP initiative. Audiences choose from three levels to suit their preferences, including  Classic, 6-play, 4-play or 2-play packages; Choice, a personalized package that can include both Owen and Albert productions; and Whenever—the ultimate flexible package, to be used at any time during the season. All Goodman members receive unlimited ticket exchanges, discounted parking, 15% savings at the Goodman bar and gift shop, restaurant discounts and more. To purchase a Membership visit GoodmanTheatre.org or call the Box Office at 312.443.3800. 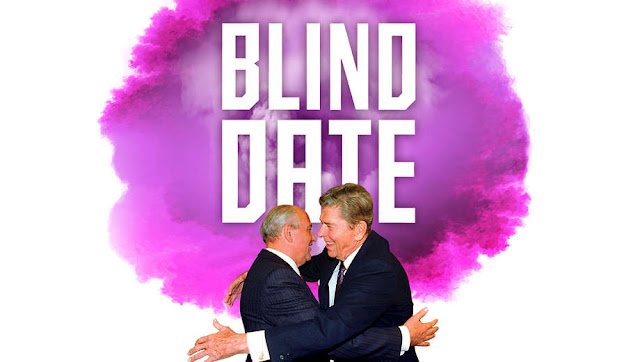 ABOUT GOODMAN THEATRE
AMERICA’S “BEST REGIONAL THEATRE” (Time magazine), Goodman Theatre is a premier not-for-profit organization distinguished by the excellence and scope of its artistic programming and civic engagement. Led by Artistic Director Robert Falls and Executive Director Roche Schulfer, the theater’s artistic priorities include new play development (more than 150 world or American premieres), large scale musical theater works and reimagined classics (celebrated revivals include Falls’ productions of Death of a Salesman and The Iceman Cometh). Goodman Theatre artists and productions have earned two Pulitzer Prizes, 22 Tony Awards, over 160 Jeff Awards and many more accolades. In addition, the Goodman is the first theater in the world to produce all 10 plays in August Wilson’s “American Century Cycle” and its annual holiday tradition A Christmas Carol, which celebrates its 40th anniversary this season, has created a new generation of theatergoers. The Goodman also frequently serves as a production partner with local off-Loop theaters and national and international companies by providing financial support or physical space for a variety of artistic endeavors.