Underscore Theatre Company is pleased to present its 4th annual CHICAGO MUSICAL THEATRE FESTIVAL, created to showcase and support the growing field of musical theatre creators from Chicago and beyond. This year’s Festival, featuring full productions of seven new musicals plus two staged readings, will play February 6 – 16, 2018 at the Greenhouse Theater Center, 2257 N. Lincoln Ave. in Chicago. Each full production will receive at least four performances during the Festival. Single tickets are currently available at www.cmtf.org.

I'll be out for the press “Sneak Preview,” featuring a sampling of songs from the 2018 Festival on Monday, February 5. Get your tickets early and at a discount for CTW!

Since its inception in 2014, the CHICAGO MUSICAL THEATRE FESTIVAL has brought 35 new musical to Chicago stages. The festival provides much-needed artistic resources for emerging composer/lyricist teams to have their work supported, explored and most importantly – performed!

Born in Vietnam and raised in southwestern Kansas, Vi Nhan H. Tran is torn between the mysterious secrets of his heritage and the waving wheat fields of his adopted home. A poignant and humorous folk musical memoir, The Butcher’s Son chronicles the Tran family’s escape from Vietnam, imprisonment by the Khmer Rouge and resettlement in the cattle country of America. Tran weaves a thrilling refugee story and All-American tale of how family stories become family lore and where one family's search for a home ends.

Four gay men, seeking different types of connection, intersect to hilarious and calamitous results in this sung-through musical parody that puts the notorious gay hook-up app into the exaggerated world of opera. With musical styles ranging from contemporary pop to baroque, GRINDR The Opera is a daring, humorous look at the changing landscape of gay relationships, and the greatest catalyst for the shift: GRINDR.

Set during the years following the American Civil War, Iron Irene tells the story of two sisters and their fight for family, equality and a better world. Upon the death of their parents, Cassie DeLanie is sent from her home in Milwaukee, Wisconsin to live in southwestern Wyoming with her sister, Irene. Together, the sisters must learn to adjust to this new world while still attempting to maintain the beliefs and identities of their childhood. Their adventures will lead them to Wyoming’s shining moment: being the first U.S. territory to grant women’s suffrage.

A powerful rock musical about forgiveness, restoration, the power of friendship and what it means to be a family. This moving tale intersects and moves back and forth throughout 70 years and tells the story through the viewpoints of three unlikely men from different religious and ethnic backgrounds who are connected through a priceless family heirloom: a gold pocket watch. From the start of WWII to post-911 America, the lives of these characters will forever be changed during the historic liberation of Buchenwald and Dachau. Liberators: An American Musical encourages you to believe that even the most unlikely person can make a difference.

Theresa is a young, single couples’ counselor in Chicago. While she’s great (well, okay) at keeping couples together, she can’t seem to lock down a guy for herself. And the fact that she tends to get attached (well, neurotic) after just one date doesn’t help either. Cut to Mr. Wonderful moving into the office next door: beautiful, bulgy-biceped Will. It’s obsession at first sight, and no obstacle or girlfriend is going to keep Theresa from being with him. She’ll ruin relationships, sabotage dates, push people out of the closet – mixing and matching her clients until it’s just Wonderful and her. Forever. And ever.

Set in the 1920s during the decline of Vaudeville and the rise of Hollywood, The Ballad of Lefty & Crabbe tracks the journey of an ultra-sharp but down-on-their-luck comedy duo as they navigate the rapidly changing world of entertainment. With a cast of eight portraying nearly fifty characters, audiences will quickly lose themselves in this absurd and delightful comic world and leave with smiles on their faces.

Through intricate characters and intimate music, “TRU” paints a picture of how hauntingly beautiful life can be. “TRU” explores the joys and challenges of the many relationships that are formed throughout one’s life, testing the various forms of love – between a man and his father, between a granddaughter and her grandmother, between a woman and her art, between a student and his teacher, between a man and himself. Walking hand in hand with reality, “TRU” toes the line between what is unbelievable and what is true.

Jacob Freeman seems to have it all; a thriving career, a bestselling novel, and an adoring wife. But when his past comes to haunt him in the form of his estranged seventeen year old daughter, Jacob’s perfect life is suddenly turned on its head and secrets long since buried begin to rise to the surface yet again.

Joe Loula departs war-torn Bohemia for Chicago in 1917 seeking a new job and a new independence. He quickly befriends Charlie, Nora and Olivia at Williams’ Custom Pianos. As the foursome become inseparable, the U.S. plunges into the World War I: businesses, relationships and pride are put to the test. A true story set to a jazz score, Notes and Letters chronicles the attempt to find an even beat in a world where the meter is constantly shifting. 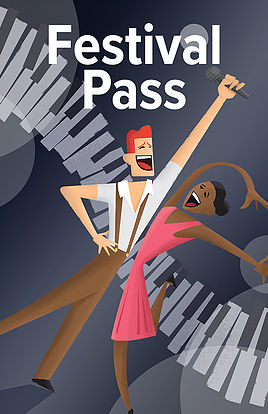 Are you a die-hard musicals fan? Do you want to see some terrific new shows and get invited to some exclusive events? Buy a festival pass and save!
​
What do I get?

1 ticket to all 7 festival full-length shows
Save 25% on your tickets, with no single-ticket fees
Exclusive invite to our February 5th press preview night to get a sneak-peek at all of this year's shows
Exclusive invite to our closing awards ceremony on February 25th
Stand at the FRONT of the line for every show, to make sure you get the best seats in the house
​
How much does it cost?
A 7-show festival pass costs only $120. Buy one HERE.
​
Once I get my pass, how do I use it?
Go to buy a ticket just like normal. Once you log in, you will be prompted to use your pass like any other payment method.