REVIEW: Take a Gamble on Flamingo & Decatur at Theater Wit 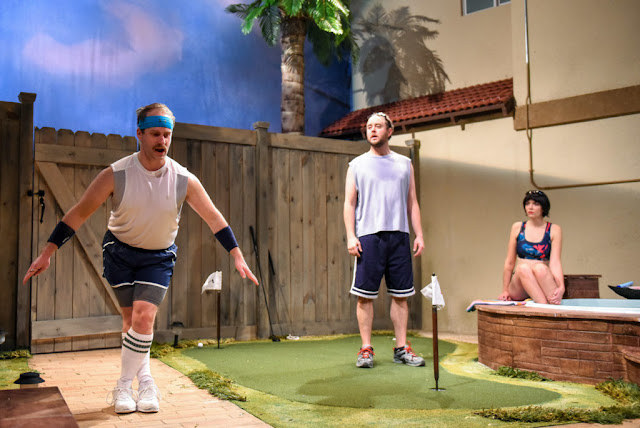 ALL PHOTOS BY EVAN HANOVER 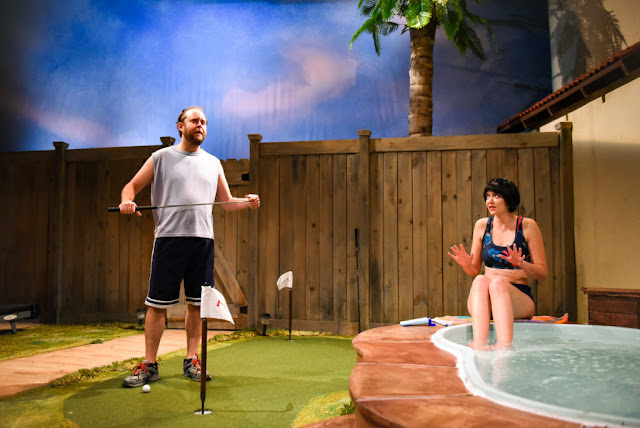 Review:
Jackson and Ben are living the American dream in a McMansion with a hot tub, and a putting green in Vegas. There's just one catch, they're squatters. This dark comedy is full of plot twists and unique psychological character studies that are big on laughs. What happens when the stakes are raised and real potential love and friendship are on the line for the conman, who has always seen people as marks and life as a series of possible bets? 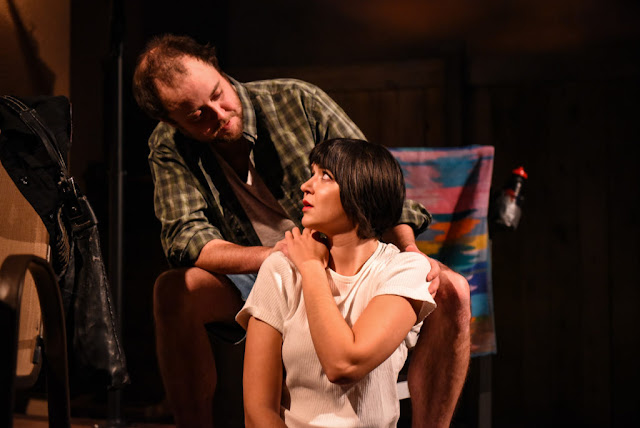 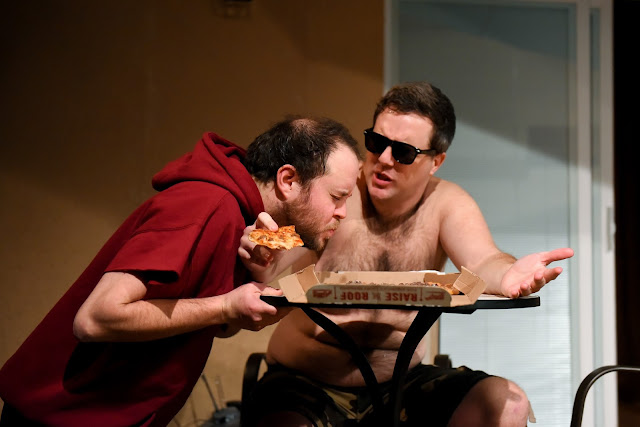 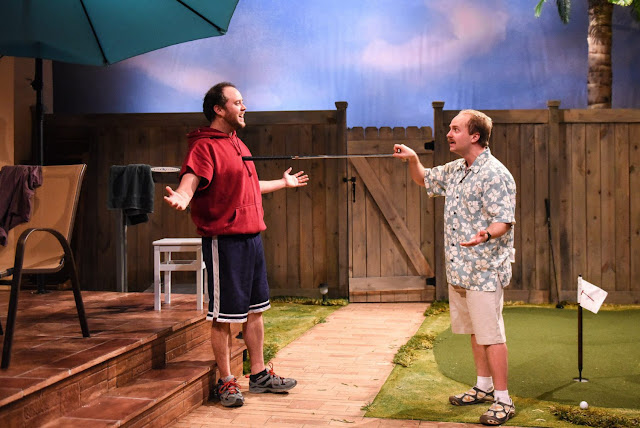 Flamingo & Decatur is a Vegas style reminder to look beyond the surface for what's real instead of illusion. We enjoyed this clever poke at human behavior and the reasons behind it, like the Vegan diet bet, and how it's human nature to both endure and hit a breaking point, sometimes at the most unexpected time and place. This is a fun evening out at Theater Wit, and worth a look. 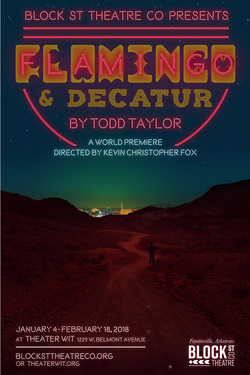 Set in a foreclosed residential property far from the glamour of the famed Las Vegas strip, FLAMINGO & DECATUR reveals a different side of Sin City. It's here we meet Jackson, a wily professional gambler struggling to stay afloat in the aftermath of the 2008 housing crash that wrecked the city's economy. Jackson thinks he's discovered a surefire way to trim living expenses – find one of the thousands of Vegas houses left vacant by foreclosure and start squatting there illegally with Ben, his online-poker-junkie roommate. But the pair soon finds that not only do they have to stay one step ahead of the law – they must also contend with their antagonistic next-door neighbor Simon, self-appointed guardian of neighborhood property values.

About the Artists:
Todd Taylor (Playwright) As a playwright/producer and founding member of Block St, Todd has spearheaded the company's focus on bringing original new work to the stage. Block St productions of his plays include: Flamingo & Decatur, a dramatic comedy delving into the lives of Vegas gamblers, The Jefferson Bottles, a black comedy inspired by the Koch Brother wine swindle, and Butte, a historical drama based on the rise and fall of copper baron Augustus F. Heinze. Other full-length plays include Calculation, a historical drama based on the calculus priority dispute between Newton and Leibniz, and The Gravedigger's Art, a comedy about finding vocational identity. Originally from the Raleigh, NC area, before coming to dramatic writing Todd worked as a sportswriter for several newspapers, taught community college English and played poker professionally in Las Vegas. He holds a BA in English from Duke University, a MA in English from UNC Greensboro and an MFA in Drama from the University of Arkansas.

Kevin Christopher Fox (Director) Originally from Asheville, NC, Kevin is an actor and director based in Chicago for the past 25 years. Recent Chicago directing highlights include: Bakersfield Mist (TimeLine); the world premiere of Assassination Theater by Hillel Levin (Russell Lane, LLC at Museum of Broadcast Communications); the world premieres of Graveyard of Empires by Elaine Romero and The Gun Show by EM Lewis, Pull of the Moon, Accidental Rapture and The Book Club Play (16th Street Theater), Lay Me Down Softly and Hughie (Irish Theatre of Chicago/Seanachai), Widowers' Houses and Androcles and the Lion (Shaw Chicago), St. Crispin's Day (Strawdog), Arms and the Man and Betrayal (Oak Park Festival), The Last Days of Judas Iscariot (Gift Theatre Company), Beggars in the House of Plenty (Mary-Arrchie), Widowers' Houses (TimeLine) and his debut Buicks (Precious Mettle). Regional highlights: the world premiere of The Actuary by Steven Peterson (Peninsula Players); the world premieres of The Spiritualist by Robert Ford and Sundown Town by Kevin Cohea, The Fall of the House and MacBeth (TheatreSquared); Macbeth (Montana Shakespeare in the Parks, Shakespeare in the Schools, adapted and directed); The Study by EM Lewis (William Inge Festival and Center for the Arts). He has directed numerous new play development workshops for Chicago Dramatists, Inge Festival, TimeLine and TheatreSquared at the Arkansas New Play Festival.

About Block St Theatre Co:
Oh, the majestic Block St Theatre! Towering above the town square with its impressive turn-of-the-century brickwork facade and its understated… wait, wait, OK, there is no actual physical theatre space on Block St (at least not yet anyway). But we chose that name because it represents the metaphorical heart of Fayetteville, Arkansas where Block St Theatre Co was born in 2015.

Like a lot of college towns (it's home to the University of Arkansas), Fayetteville supports a thriving community of artists, musicians, visual artists, writers and of course, theatre artists. Founded by a handful of grads from the U of A's theatre MFA program, Block St aims to provide a venue where some of Fayetteville's bounty of theatre talent can find its expression.

With a little imagination, we've been turning the absence of a permanent physical space from a limitation into an advantage. From a downtown art gallery to a speakeasy bar nestled in the theatre district to a black box on the U of A campus, there's no location in Fayetteville that's off limits to our brand of theatre. And this season, that perform-anywhere attitude has taken us all the way to Chicago!

As we've been welcomed into the Chicago scene by so many wonderful theatre lovers, our emerging mission has come clearly into focus. There is a real pipeline of theatre talent that runs both ways between Fayetteville and Chicago. By doing future productions in both cities, Block St aims to expand on this bridge between two amazing theatre communities!  For additional information, visit www.blocksttheatreco.org

Posted by Bonnie Kenaz-Mara at 1:19 PM