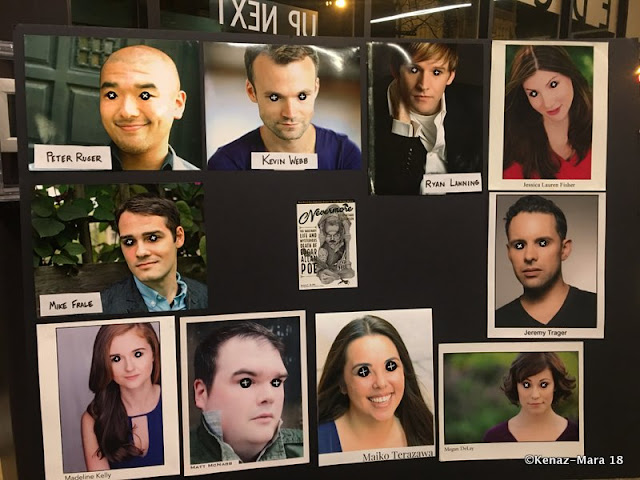 This has to be the creepiest, coolest board of headshots I've ever seen! Black Button Eyes Nevermore cast living up to their name.

Following its hit production of SHOCKHEADED PETER, Black Button Eyes Productions is pleased to conclude its 2017-18 season with the Chicago premiere musical NEVERMORE – The Imaginary Life and Mysterious Death of Edgar Allan Poe, the moving life story of the iconic American writer told through haunting music, poetic storytelling and stunning stagecraft, with book, music and lyrics by Jonathan Christenson. Directed by Producing Artistic Director Ed Rutherford, with music direction by Nick Sula and choreography by Derek Van Barham, NEVERMORE will play January 5 – 28, 2018 at The Edge Theater, 5451 N. Broadway in Chicago. Tickets are currently available at nevermorechicago.brownpapertickets.com. 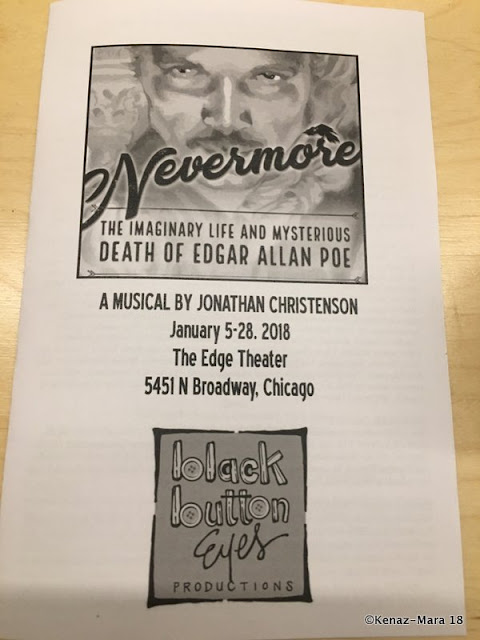 REVIEW:
It was truly a treat to catch Nevermore with my teenage son. We've both loved Poe's work forever, but knew little of his life story. This eerie and excellent musical makes for an entertaining night out. Poe endures one wrenching loss after another throughout childhood and into adulthood. He loses his parents and then his beloved adopted mother to suicide after she's forcibly committed to an asylum. He loses his true love, his chance at a college education, his sobriety, and eventually his mind. 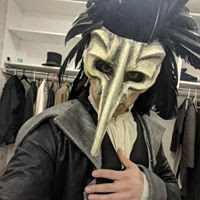 Photo credit for all: Cole Simon 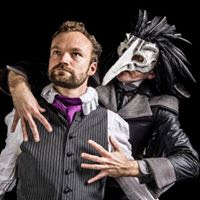 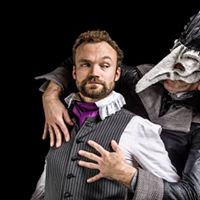 One of the most striking characters, is the ever-present Raven, who stalks Poe as a grim reaper like specter with a mask reminiscent of the black plague doctors. His spiraling descent into despair and madness parallels his increasing genius in stellar storytelling. As Poe is pouring out his grief onto the pages, he is increasingly haunted by characters, both from his life and of his own making. 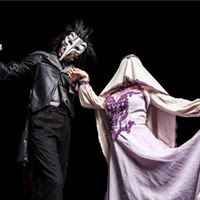 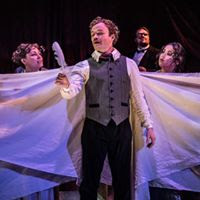 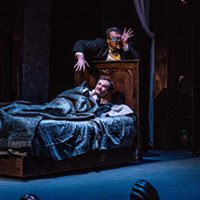 Black Button Eyes Productions does a fabulous job on a storefront theatre budget. The set design is sparse and simplistic, which works well since the story is so dramatic and colorful. The cast’s musical performance of the fitting score is fabulous. The accompanying band of three keyboards (Nick Sula, Michael Evans, TJ Anderson) and percussion (Cali Kasten) does a fine job. Still, I would love to see a remount with a small, live band actually on stage, featuring theremin, dissonant strings, and maybe even a saw. 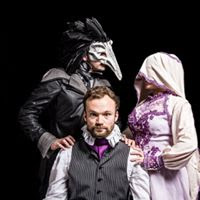 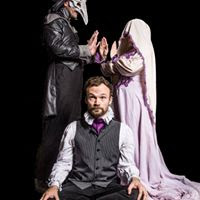 Kevin Webb does a standout performance as Edgar Allan Poe, and there's not a weak link in the ensemble. Overall, this is an eclectic and striking production that's well worth seeing. Highly recommended. Catch Nevermore at The Edge Theatre through January 28th. 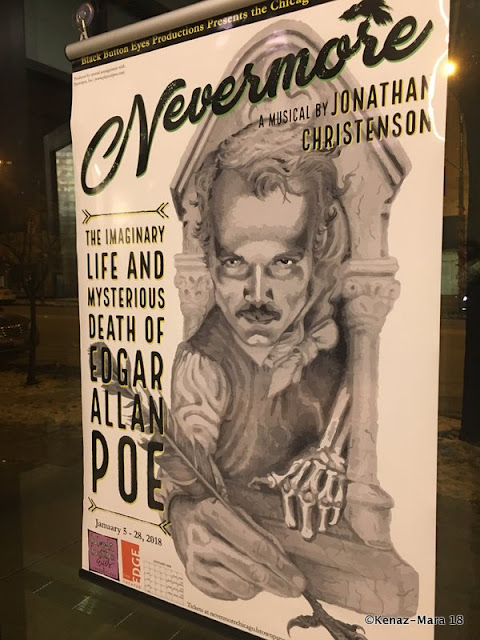 Edgar Allan Poe’s life reads like one of his short stories: an unrelenting tale of misery and woe. His death is also shrouded in mystery. Was he just spectacularly unlucky, or did a supernatural shadow fall over his life? This Chicago premiere weaves fact and fiction into a tapestry of music and poetry. 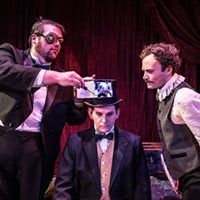 Tickets: $30. Tickets are currently available at nevermorechicago.brownpapertickets.com. Tickets may also be purchased in person beginning one hour prior to each performance.

About the Artists:
Jonathan Christenson (Book, Music & Lyrics) is a director, writer and composer whose original musical plays have been presented at major theatres and festivals throughout the U.K., Australia, the U.S. and Canada. His work has been recognized with more than 40 British, Canadian and American awards and nominations, including a Lucille Lortel nomination for Outstanding New Musical of New York’s 2015 Off-Broadway season. His plays have been published by Playwrights Canada Press, Newest Press and Bayeaux Arts, recordings of his music can be found on iTunes and at Broadway Records, and his productions are featured in American Theatre, Maclean’s, CTR, PRISM International, Canada World View and All Stages. He was named one of “Alberta’s Fifty Most Influential People” by Venture Magazine and Alberta Playwrights Network chose him as one of Alberta’s one hundred most significant theatre artists of the past one hundred years.

Ed Rutherford (Director) recently directed Black Button Eyes’ Jeff-Recommended Shockheaded Peter, preceded by Amour (Chicago premiere), Goblin Marke, and Stephin Merrit's musical adaptation of Coraline (Midwest Premiere). In 2017, Ed also directed the Jeff-Recommend productions of The Liar with Promethean Theatre Ensemble and Paula Vogel’s The Baltimore Waltz at Brown Paper Box Co. He is an artistic associate at Promethean, where he additionally directed his own world premiere adaptation of the Peter S. Beagle fantasy novel The Last Unicorn, Brecht’s The Caucasian Chalk Circle and the company's inaugural production, Christopher Durang’s Beyond Therapy. As an actor, he has performed with Drury Lane Oakbrook, Porchlight, Theater Wit and many others. A graduate of Northwestern's theater program, he is currently completing his MBA at Kellogg.

Nick Sula (Music Director) is a pianist, arranger and award-winning music director for theater and cabaret. He is proud to return to Black Button Eyes where he performed as music director for Amour and Coraline. Recent theater credits include music direction at Porchlight Music Theatre, Pride Films and Plays, Bohemian Theatre Ensemble and Chicago Theatre Workshop. Nick is an instructor, music director and vocal coach at the Chicago College of Performing Arts at Roosevelt University. He is also a member of the Chicago Cabaret Professionals, performing with vocalists at venues such as Davenport’s, Uptown Underground, Stage 773, Victory Gardens, The Twisted Vine and the Park West. www.nicksula.com

Derek Van Barham (Choreographer) is the Associate Artistic Director of Pride Films & Plays, a member of the Red Tape Theatre ensemble and a former Artistic Director of The Ruckus. For PFP, he has directed Angry Fags (Steppenwolf Garage Repertory), Songs from an Unmade Bed (Jeff nomination: Best Director of a Musical or Revue), PRISCILLA, Queen of the Desert: The Musical (co-directed by David Zak). He also wrote, directed and choreographed BITE: A Pucking Queer Cabaret and Kill Your Boyfriends. Other directing credits include Three Days of Rain (Boho), Miracle! by Dan Savage and Skooby Don't (Hell in a Handbag) and Trash (New American Folk Theatre). He has choreographed for Black Button Eyes (Shockheaded Peter, Coraline the Musical, Goblin Market, Amour), Permoveo (Albert Cashier), The Plagiarists, Inappropriate Theatre,and Salonathon. He can currently be seen improvising with the LGBT team Baby Wine (Fridays at The Annoyance). He was recently named one of Windy City Times 30 Under 30, recognizing individuals from Chicago's LGBTQ community. He holds an MFA from Chicago College of Performing Arts. www.derekvanbarham.com

About Black Button Eyes Productions
Along with the Jeff-Recommended Chicago storefront premiere of Shockheaded Peter, the other production of the 2017-2018 season, Nevermore continues Black Button Eyes Productions' mission to bring to Chicago premieres and seldom-seen works containing elements of fantasy, in which the magical and surreal invade reality. The company was founded in 2014 with the acclaimed Midwest Premiere of the musical Coraline, and continued in 2015 by producing the musical Goblin Market in its first Chicago production in over 15 years, attended by the author, Chicago native Polly Pen. In 2016 the company presented the Chicago premiere of the musical Amour.