REVIEW: For The Loyal Tackles Reality and Morality In Football Coach Pedophilia Scandal


Through February 4, 2018 at The Athenaeum Theatre 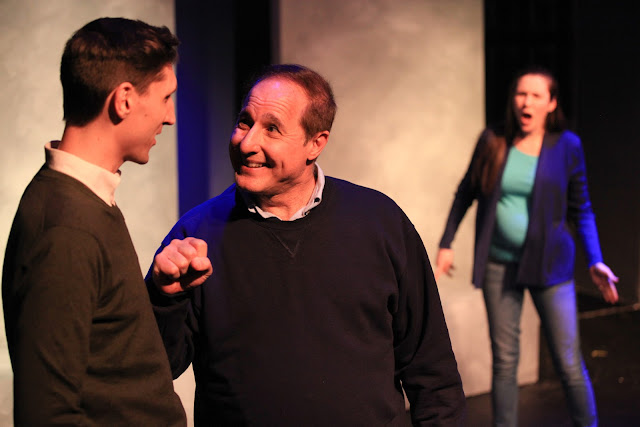 Review:
Interrobang Theatre's at it again, challenging perceptions and pulling no punches. There are plenty of plot twists in this cleverly crafted drama, where 5 characters run through an entire playbook of possible outcomes, when a talented coach is caught making illegal choices with a child.

There are many truth bombs here about complicity and why society often gives a pass to role models suspected of sketchy behavior. We teach our children to beware of strangers when we should teach them to beware of heroes! When beloved coaches, teachers, community leaders, doctors, friends and family abuse the trust of children and adolescents, it's beyond complicated to find hard evidence, rip lives apart, and destroy the good being done, in order to protect current and future victims. People don't want to look under rocks. It's easier to be naive than to be disloyal and believe horrific truths about those we trust with our children. When loyalty to a team or a family is sacred, it's beyond bravery to go against that bond.

Even in the "Me Too" era, it's often easier to look away from the abyss than to deal with the repercussions of whistle blowing, from not being believed to being fired or retaliated against. This show also goes well beyond knee jerk reactions to taboos like pedophilia and incest, to explore why victims stay silent, even calling into question the cringeworthy grey areas where some actually welcome the money or crave the attention of their abusers and feel ambiguously responsible. 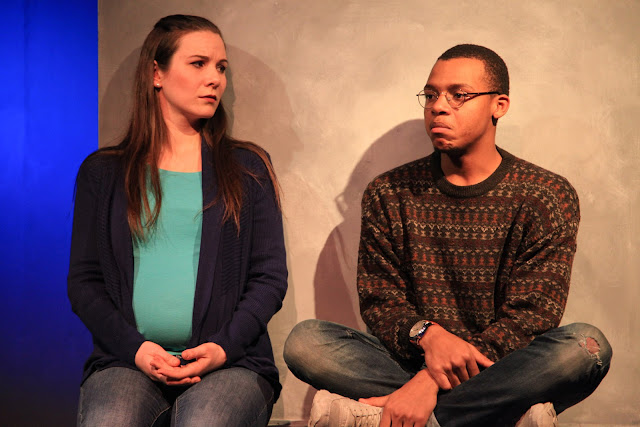 (left to right) Sarah Gise and Richard David in Interrobang Theatre Project's Chicago premiere of FOR THE LOYAL. Photo by Emily Schwartz.

For the Loyal also explores the morality of taking extreme measures to protect our children. Is another illegal act like murder justifiable to stop a serial child molester who'll likely never stop? Is a sympathetic pregnant mother above the law and justified in protecting her children and others by any means necessary? Is an organization complicit in cover ups, if it turns a blind eye to protects it talent pool from ugly accusations? Is lying to the police and powers that be an acceptable crime when livelihood is on the line?

We recommend checking out this intricate and excellent production.

Presented as part of Interrobang Theatre Project’s 'RAW Series'
exploring the urgent question “What is Truth?”. As we begin 2018, few things are as American as football and sex abuse scandals, so this on stage exploration is more than timely. 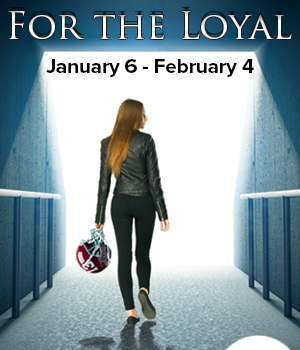 Important Info: Due to strong language, not recommended for all ages. Performance lasts 78 minutes without intermission. 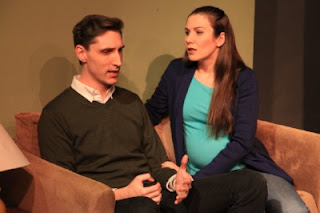 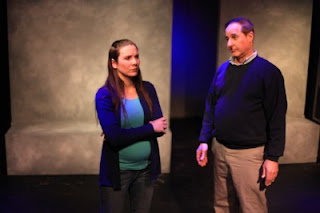 Following its hit production of FOXFINDER, Interrobang Theatre Project is pleased to continue its 2017-18 Season, exploring the urgent question “What is Truth?,” with the Chicago premiere of Lee Blessing's shocking and thought-provoking new play FOR THE LOYAL, directed by Co-Artistic Director James Yost*. FOR THE LOYAL will play January 6 – February 4, 2018 at The Athenaeum Theatre (Studio 1), 2936 N. Southport Ave. in Chicago. Tickets are currently available at www.interrobangtheatre.org, by calling (773) 935-6875 or in person at The Athenaeum Theatre Box Office.

FOR THE LOYAL features ensemble members Sarah Gise* as Mia and Matthew Nerber* as Toby with Richard David as The Boy, Rob Frankel as Carlson and Josh Zagoren as Hale.

For Toby and Mia, college football and family are one and the same; he has a new coaching job for a top team, and they are happily expecting their first born. But when Toby gets Mia enmeshed in an unseemly team secret, she is forced to decide where her loyalties truly lie. Inspired by the Penn State sexual abuse scandal, FOR THE LOYAL takes an unconventional and provocative look at how one woman traverses a no-win situation.

FOR THE LOYAL is presented as part of Interrobang's RAW Series. Think of it a bit like theatrical sashimi. Big ideas, bold flavors – everything you’ve come to expect from Interrobang Theatre Project – without the trimmings. We’ve stripped down the classic stage elements to put the story front and center. The RAW Series features passion-projects and bucket-list productions spearheaded by our talented ensemble. In addition to our regularly scheduled plays, the RAW Series aims to bring concise, actor-driven theater to the Chicago stage.

Tickets: Regular run: $32. Students $17 with ID. (Ticket prices include $2 Athenaeum Theatre restoration fee).
Tickets are currently available at www.interrobangtheatre.org, by calling (773) 935-6875 or in person at The Athenaeum Theatre Box Office.
About the Artists:

Lee Blessing’s (Playwright) play A Walk in the Woods was produced on Broadway and London's West End. His Off-Broadway productions include A Body of Water, Primary Stages; Going To St. Ives, Primary Stages (Outer Critic’s Circle Award, Best Play, Obie for ensemble performance); Thief River, Signature Theatre (Drama Desk nomination, Best Play); Cobb, Lucille Lortel Theatre (Drama Desk award, best ensemble); Chesapeake, New York Stage and Film at Second Stage; Eleemosynary, Manhattan Theatre Company and Down the Road, the Weissberger Group at the Atlantic Theatre. The Signature Theatre dedicated its 1992-93 season to his work, consisting of Fortinbras, Lake Street Extension, Two Rooms and the world premiere of Patient A. Other world and regional premieres include an adaptation of Thornton Wilder’s Heaven's My Destination, which had its world premiere at the Cleveland Play House, Great Falls in the Humana New Play Festival of the Actors Theatre of Louisville, A Body of Water at the Guthrie Theater and the Old Globe Theatre, Lonesome Hollow, Flag Day and Whores at the Contemporary American Theatre Festival, The Scottish Play at La Jolla Playhouse, Black Sheep at Florida Stage and The Winning Streak at George Street Playhouse. Other plays include Independence, Riches, Oldtimers Game, Nice People Dancing To Good Country Music and Perilous Night. Productions of Blessing’s plays have earned awards such as The American Theater Critics Circle Award, the L.A. Drama Critics Award, The Great American Play Award, The Humanitas Award, and the George and Elisabeth Marton Award, among others. He has received nominations for Tony and Olivier awards, as well as the Pulitzer Prize. He heads the graduate playwriting program at Mason Gross School of the Arts, Rutgers University.

James Yost (Director) is a Joseph Jefferson Award nominated director and the Co-Artistic Director of Interrobang Theatre Project. He previously served as the producing artistic director for BareBones Theatre Group, a company he co-founded in 1998. Selected credits include: Mr. Marmalade, Psycho Beach Party, Debbie Does Dallas: The Musical, Skylight, The Graduate, The Play About the Baby, A Midsummer Night’s Dream, Drift, bash; the latter-day plays, Squirrels, The Wizard of Oz, Lend Me A Tenor, Orson's Shadow, Glengarry Glen Ross, The Pitchfork Disney and Noises Off.  For ITP, credits include Orange Flower Water (Jeff nomination for Best Supporting Actor, Joseph Wiens), Ibsen is Dead, The North Pool (Jeff nominated for best production and best director), Falling (Jeff nominated actors: Justin Tsatsa and Amy Johnson) and last season's critically acclaimed REALLY REALLY (named one of the best shows of 2015 by the Chicago Tribune). Other credits include True West by Sam Shepard for Shattered Globe. This summer he will direct Boeing Boeing for Davidson College. He teaches acting, directing, production design and film at the high school and collegiate level. He is published in Teaching Theatre Journal, a publication of Dramatics Magazine.

About Interrobang Theatre Project
Now in its eighth season, Interrobang Theatre Project, under the artistic leadership of Georgette Verdin and James Yost, has been hailed by the Chicago Tribune as a “company to watch” and by Time Out Chicago as “one of Chicago’s most promising young theatre companies.” Season seven earned seven non-Equity Jeff Nominations, including Best Director, Production of a Play, Solo Performance and acting nominations for Lead Actor, Actress and Actor in a Supporting Role. Productions have included the world premiere of Calamity West’s Ibsen is Dead (Jeff Recommended), and the Jeff Recommended The Pitchfork Disney, Orange Flower Water, Recent Tragic Events, The Amish Project, The North Pool, and Falling. Director James Yost’s critically-acclaimed Really Really was one of six shows chosen for Chicago Tribune’s list "Best of 2015 in Chicago Fringe Theater.”


For more information, please visit www.interrobangtheatreproject.org.
Posted by Bonnie Kenaz-Mara at 6:52 AM