OPENING: World Premiere of The Light at The Den Theatre Via The New Colony Through 2/4/18

The New Colony Presents the World Premiere of
THE LIGHT
Written by Loy Webb
Directed by Toma Langston
January 5 – February 4, 2018 at The Den Theatre 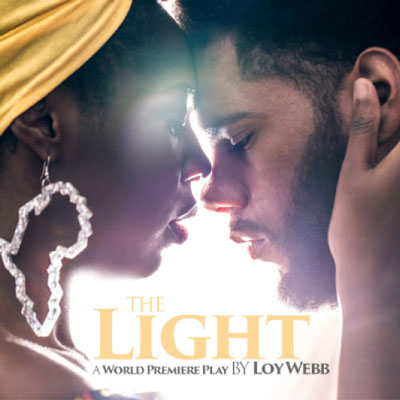 ChiIL Live Shows will be ChiILin' at one of our favorite Chi, IL theatre venues, The Den Theatre, on Thursday the 11th, reviewing The Light. We can't wait to catch this world premiere by The New Colony. Check back soon for our full review.

A surprise proposal takes an unexpected turn that upends the world of Genesis and Rashad, forcing them to confront a devastating secret from the past and putting the future of their relationship at risk. Featuring two of Chicago’s most dynamic actors, THE LIGHT is a 70-minute, real-time rollercoaster journey of laughter, romance and despair that uncovers how the power of radical love can be a healing beacon of light.

The LIGHT is the 30th world premiere presented by The New Colony since 2008 and marks the final production under the tenure of founding co-artistic directors Andrew Hobgood and Evan Linder, who are stepping down at the conclusion of the company’s ninth season

About the Artists
Loy Webb (Playwright) is a Chicago born theatre journalist and playwright. Her new play The Light was developed through The New Colony’s Writer’s Room 4.0. She is an inaugural Tutterow Fellow at Chicago Dramatists, and her one-act plays have been featured at Black Ensemble Theatre, American Theater Company, 20 Percent Theatre Company Chicago, University of North Dakota, GI60 International One Minute Play Festival, Modern-Day Griot Theatre Company New York and the Black Lives, Black Words International Project, in which she is an associate artist. As a theatre journalist she is a member of the Association of Women of Journalists-Chicago, a past mentor with the AWJ-Chicago/Goodman Theatre’s Cindy Bandle Young Critics Program and a contributing theater critic for Newcity. Her one act play, I AM a Woman is published in both Wish to Live: The Hip-hop Feminism Pedagogy Reader and the Black Lives, Black Words International Project anthology. Additionally, her one-act play Saving Inge is published in One Minute Plays: A Practical Guide To Tiny Theatre. Loy holds a B.A. in Political Science from the University of Illinois at Urbana-Champaign, and J.D. from The John Marshall Law School. Her primary mission with all her writing is to be a pointer towards hope.

Jeffery Owen Freelon Jr. (Rashad) is a proud south side Chicagoan (Hyde Park) and excited  to work on a play by black people and for black people. He is also extremely proud to see it produced by The New Colony. He has worked with an array of theatre companies such as Theatre Unspeakable, Definition Theatre and Victory Gardens and has made an appearance on Chicago PD. He is represented by Paonessa Talent Agency.

Tiffany Oglesby (Genesis) is originally from Atlanta, GA. and recently appeared as Vanessa in About Face and Theatre Wit’s co-production of Significant Other. Other theatre credits include An Octoroon (Definition Theatre), truth and reconciliation (Sideshow), East Texas Hot Links (u/s Writers) and A Small Oak Tree Runs Red (u/s Congo Square). She also had the pleasure of working with other theatre companies including Raven and Lifeline. TV credits include Chicago Med and The Chi. She received her BFA in Performing Arts from Savannah College of Art and Design and her MFA in Acting from The Theatre School at DePaul University. Happily exclusive with Grossman and Jack Talent.

THE LIGHT is sponsored by Michael and Mona Heath.

The New Colony develops NEW ART and NEW ARTISTS in order to educate and build NEW AUDIENCES. Founded in 2008, The New Colony has established itself as “one of Chicago’s essential off-Loop companies” (Chicago Tribune) having developed and produced over 25 world-premiere plays and musicals garnering four Joseph Jefferson Awards, the 2011 Broadway in Chicago Emerging Theatre Award, and Best Overall Production at the 2012 New York International Fringe Festival. The New Colony is a resident company of The Den Theatre located in Wicker Park.
Posted by Bonnie Kenaz-Mara at 3:05 PM