REVIEW: The Christmas Schooner Returns For Its Annual Holiday Voyage at Mercury Theater Through 12/31/17 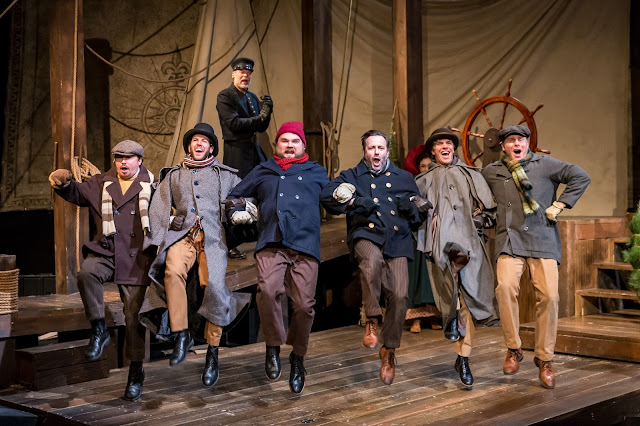 Inspired by true events, The Christmas Schooner is a delightful musical currently playing at the Mercury Theater through the month of December. If you haven't seen it, the show is a wonderful addition to the other holiday-themed theatrical offerings now running in the Windy City. In its seventh year, The Christmas Schooner relates an inspiring story of a Michigan family who braved the icy waters of Lake Michigan to bring Christmas trees from the Upper Peninsula to Clark Street Docks in Chicago in the early 1900s. Selling the trees for fifty cents to a dollar apiece, Captain Herman Schuenemann would also give trees away to the needy. A letter from his cousin in Chicago woefully explains there are no evergreen trees to be had in the bustling city for her beloved Tannenbaum. Against his wife's wishes, she realizes a winter storm on the lake can be deadly, the captain is determined to bring Christmas cheer to the German immigrants of Chicago.

The first outing seems foolhardy, and wife Alma's dismay of her husband, Captain Peter Stossel, daring such a journey in the dead of winter is shown amusingly by Brianna Borger's silent treatment and angry knitting. Ms. Borger has a lovely voice and her stage presence is warm and perfect as the supportive wife, mother, and daughter-in-law. Her husband is played dutifully by a returning Stef Tovar, who was so convincing, and unrecognizable, as the lead character in A Funny Thing Happened on the Way to the Gynecologic Oncology Unit at Memorial Sloan-Kettering Cancer Center of New York City. Also of particular note is Don Forston as the German grandfather Gustav Stossel. He lapses into his native German frequently at the beginning, but his daughter-in-law admonishes him to "speak in American." He also utters a "Gott im Himmel!" disguising his swearing in German. Coincidentally, my own father recalled his German grandmother using the exact same phrase when she wanted to curse in front of her grandchildren!

The costumes and songs are delightful, and my companion and I enjoyed learning a little bit more about Chicago's immigrant past. One of the most memorable songs was the haunting "What Is It about the Water?" We forget what these ship workers and sailors went through, and how anxious life on land was for their patiently waiting wives. 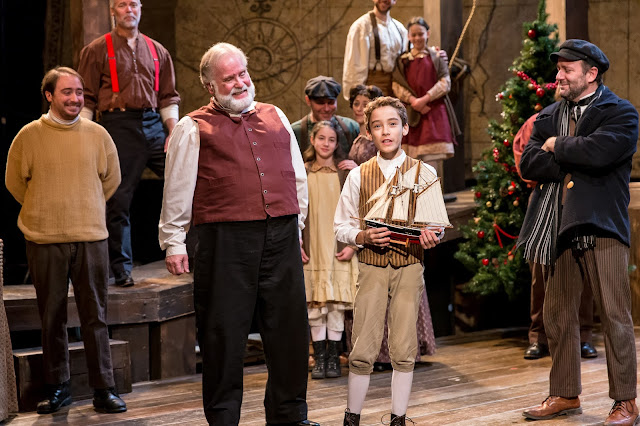 (There is also a funny scene about how the city could also be a dangerous place not to be trusted as a swindler takes advantage of the Michigan visitors and their gullibility.) On the first voyage, uncertain whether the crew would sell a single tree, they are shockingly greeted with a crowd of 500 people, mostly European immigrants who want to experience the familiar Christmas ritual of decorating a tree in their homes. The "Christmas Schooner," as it becomes dubbed, makes several subsequent journeys for years until tragedy strikes. The danger on the Great Lakes is very real. Interestingly, the last year of the original Christmas Schooner was also the year the Mercury theater opened in 1912.

Plan to make The Christmas Schooner a part of your family tradition. It will sail into your hearts.

Meet the creative team of THE CHRISTMAS SCHOONER! from Mercury Theater Chicago on Vimeo.


Hear from Director L. Walter Stearns, Music Director Eugene Dizon and Choreographer Brenda Didier and learn why THE CHRISTMAS SCHOONER is so special to them. 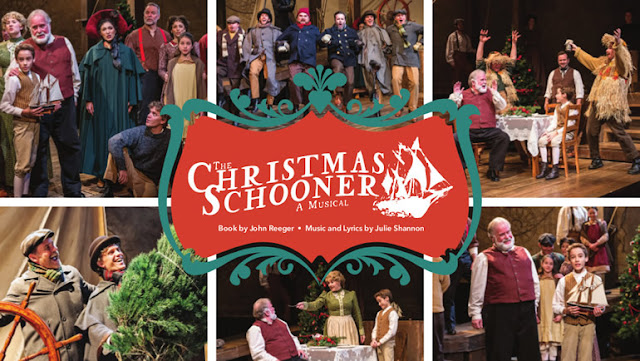 Mercury Theater Chicago, 3745 N. Southport Avenue – THE CHRISTMAS SCHOONER will be sailing for its seventh year at Mercury Theater Chicago, from November 24 through December 31, 2017. We are pleased to welcome new cast members to the Schooner family including Nicole Armold, Harter Clingman, Jared Rein, Ron Keaton, Ryan Stajmiger and Holly Stauder with Don Forston returning at the helm as “Gustav Stossel.” The cast will be led by the Jeff-award winning team of L. Walter Stearns (Director), Eugene Dizon (Musical Director) and Brenda Didier (Choreographer). Whether it is your first or tenth time seeing THE CHRISTMAS SCHOONER, this heartwarming Chicago-centric story never fails to remind us what the holidays are all about: sharing love.

The whole family will enjoy this heartwarming musical story of the first Christmas tree ship and the family who risked their lives to fill Chicago with the Christmas spirit. Hailed as "A sacred part of a Chicago Christmas!" by the Chicago Tribune, this production has become one of Chicago’s great holiday traditions. The production features a powerful, moving story, an exquisite score of original music and traditional holiday favorites.
Director L. Walter Stearns: “There are a great many holiday shows to choose from, but the importance of continuing THE CHRISTMAS SCHOONER is too great, not only to us personally, but to the families who have made us part of their holiday tradition each year. This show is a holiday slice of Chicago history...a story of immigrants sharing their family traditions. It seems we need that reminder this year more than ever” 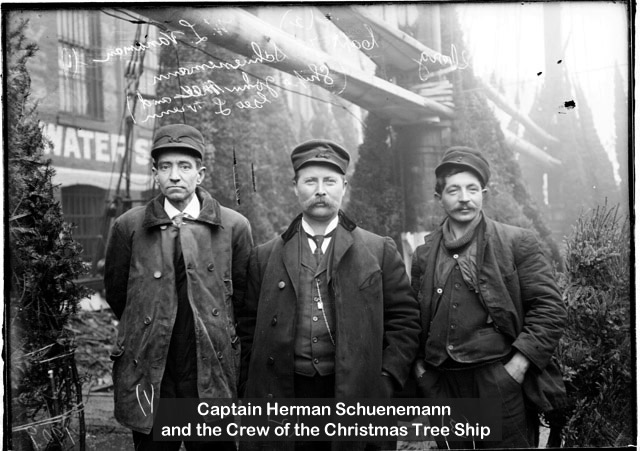 The shipwreck of the Rouse Simmons, known as 'The Christmas Tree Ship,' served as inspiration for THE CHRISTMAS SCHOONER. Her captain and crew risked the notoriously violent winter lake to bring Christmas trees from Michigan's Upper Peninsula to Chicago's German immigrants. Each year, Captain Herman Schuenemann would sell trees right off of the ship at the Clark Street Docks, and was known to give free trees to the needy. On November 23, 1912, the ship was swept up in a terrible storm. It was not until 59 years later that she was discovered, lying in 170 feet of water. Today the Rouse Simmons and her cargo of 5,500 well stacked trees remain preserved in the cold, fresh waters of Lake Michigan and her legend has grown to mythical proportions. The Blaine Nickelodeon - the silent film theater that now houses the Mercury - opened that very same year.
THE CHRISTMAS SCHOONER has entertained audiences in hundreds of productions including a twelve-year run at Chicago's Bailiwick Repertory Theatre. A timely and uplifting tale of love, THE CHRISTMAS SCHOONER is a poignant ode to the rich legacy of Chicago and a reminder of our responsibility to celebrate the living while honoring our heritage. In 2011, Mercury Theater Chicago revived THE CHRISTMAS SCHOONER with a full orchestra and an all-star cast, garnering a "Best Production" nomination for the 2012 Jeff Awards.

The production has been called "A grand family tradition!" by the Chicago Tribune and "An inheritance to be treasured...Highly recommended!" by the Chicago Sun-Times. Time Out Chicago Kids says that “An emotion-packed, Christmas-themed tale of redemption give the Mercury Theater’s production of THE CHRISTMAS SCHOONER all the trappings of a family holiday tradition in the making!"

THE CHRISTMAS SCHOONER is written by Chicagoans John Reeger (book) and Julie Shannon (music and lyrics).  Don Forston will return to the helm as ‘Gustav Stossel’ with Brianna Borger as Alma and Stef Tovar as Peter Stossel.  Rounding out the crew on this year's schooner voyage are Kelly Anne Clark, Dan Gold and Christian Libonati.  New shipmates include Nicole Armold, Harter Clingman, Leo Gonzalez, Stella Hoyt, Ben Miller, Jared Rein, Ryan Stajmiger, Holly Stauder and Elise Wolf. The scenic design is by Jacqueline and Richard Penrod, with costume design by Carol Blanchard and sound design by Mike Ross.  The beautifully renovated Mercury Theater Chicago is an intimate jewel box of a theater in the heart of the Southport Corridor, a sophisticated neighborhood of restaurants and boutiques just steps from Wrigley Field. A delightful theater destination, Mercury Theater Chicago takes care of its guests from the moment they arrive with valet service and dining at its adjoining restaurant, Grassroots.
The performance schedule for THE CHRISTMAS SCHOONER is Wednesdays at 8pm, Thursdays at 3pm and 8pm, Fridays at 8pm, Saturdays at 3pm and 8pm and Sundays at 3pm.  There are additional holiday performances on Tuesday, December 19th at 8pm and Tuesday, December 26th at 8:00pm. 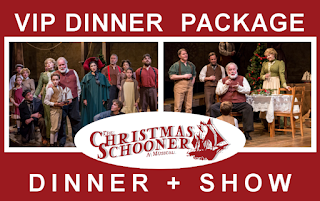