OPENING: Irreverent Adult Comedy Barney the Elf at Greenhouse Through 12/30/17 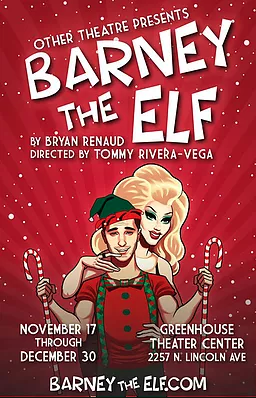 ChiIL Live Shows will be out for the press opening November 28th and we can't wait to catch another snarky adult holiday revival, and an antidote to the over saccharine sweetness of the season. Check back soon for our full review.

Other Theatre is pleased to continue its 4th season with the third revival of its holiday hit BARNEY THE ELF, a campy and irreverent musical comedy, written by Bryan Renaud with lyrics by Renaud and Emily Schmidt. After helming the 2016 production, Tommy Rivera-Vega returns to direct and choreograph, with music direction by Nik Kmiecik and arrangements by Jermaine Hill. BARNEY THE ELF will play November 17 – December 30, 2017 at Other Theatre’s resident home, The Greenhouse Theater Center, 2257 N. Lincoln Ave. in Chicago’s Lincoln Park neighborhood.

Tickets are available at www.theothertheatrecompany.com, in person at the Greenhouse Theater box office or by calling (773) 404-7336. Season subscriptions are currently available.

After Santa Claus retires, his wicked son begins a not-so-jolly reign as the new head of Christmas. The North Pole begins to crumble under his bigoted rule, and Barney the Elf is forced to leave his home for being different from the others. Soon he embarks on a fabulous journey of self-discovery (or is it elf-discovery?) that lands him in one of Chicago's hottest drag bars. But can he truly leave Christmas behind for a new life in the big city? BARNEY THE ELF brings pop-infused musical numbers galore and plenty of queer holiday cheer to Lincoln Park for the third year in a row!

"Rather endearing [with] surprising emotional payoffs... Renaud and his collaborators may well have a fringe holiday repeat hit to call home for the holidays."  –The Chicago Tribune

Bryan Renaud (Book and Lyrics) is the Associate Artistic Director of Other Theatre, where he has premiered his plays Barney the Elf and Other Letters, the latter co-written with Carin Silkaitis. He is also a founding member of Random Acts, where he premiered Strangest Things! The Musical, All Our Twilight and Ladies Night of the Living Dead. As a performer, Bryan has worked with American Theater Co., Pride Films & Plays, Provision Theater, Music Theatre Co., GreatWorks, Prologue Theatre, Shakespeare at the Centre, Oak Park Festival Theatre, NWaC and Two Pigs Productions. www.BryanRenaud.com

Emily Schmidt (Lyrics) is a freelance playwright and grant writer based in Chicago. She earned her Masters in English from Loyola University. Other works include writing for Acid Reflux Comedy as well as the plays All Our Twilight, Awkward Family Gatherings and Strangest Things! The Musical.

Nik Kmiecik (Music Director) is thrilled to be back with Barney the Elf in his new role of music director. He has music directed youth productions with SELF theatre and musical productions at his alma mater, North Central College in Naperville. Nik was an elf/ensemble member for Barney last year and has performed with numerous theatres in Chicago including Chicago Shakespeare, Chicago Children's Theatre, Filament Theatre, Haven Theatre, Silk Road Rising and Porchlight Theatre. Nik is an artistic associate of Other Theatre and is proudly represented by Stewart Talent.

Other Theatre is dedicated to telling the stories of persons or groups who are othered by systems of oppression. Othering individuals or groups sustains power and privilege. Othering inherently implies hierarchy. Othering keeps the power in the hands of those who already have it.  Othering is an "us" vs. "them" mentality often centered around race, ethnicity, sexuality, gender, identity, class, religion and ability. Other Theatre is committed to telling these stories in the hope that we can lessen the amount of discrimination and oppression in our world.

Other Theatre Board of Directors:

Posted by Bonnie Kenaz-Mara at 5:00 PM