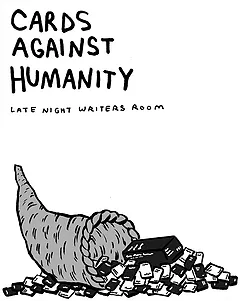 The evening will be hosted by Chicago drag sensation Dixie Lynn Cartwright, currently appearing in Other Theatre’s annual hit holiday musical BARNEY THE ELF at Greenhouse Theater Center. Tickets, priced at $10, are currently at greenhousetheater.org, in person at the box office or by calling (773) 404-7336. All proceeds from CARDS AGAINST HUMANITY LATE NIGHT WRITERS ROOM will benefit Howard Brown Health. For additional information, visit howardbrown.org.


About the Greenhouse Theater Center

The Greenhouse Theater began its producing life in 2014 with the smash hit Churchill, after which came 2016’s much-lauded Solo Celebration!, an eight month, 16 event series highlighting the breadth and depth of the solo play form. This year, the Greenhouse announced a full subscription season, with a mix of multi-character and solo plays. With a focus on our community, the Greenhouse has also launched the Trellis Residency Initiative, an initiative designed to cultivate the next generation of Chicago theatre creators, as well as the MC-10, an ensemble of mid-career playwrights whose works will be included in future Greenhouse programming.

As a performance venue, our complex offers two newly remodeled 190-seat main stage spaces, two 60-seat studio theaters, two high-capacity lobbies and an in-house rehearsal room. We strive to cultivate a fertile environment for local artists, from individual renters to our bevy of resident companies, and to develop and produce their work. In 2016, the Greenhouse announced a new residency program, which offers a reduced rate to local storefront companies while giving the Greenhouse a stake in the resident’s success. We house Chicago’s only dedicated used theatre bookstore, located on the second floor of our complex.

With new ideas always incubating, the Greenhouse is flourishing. Come grow with us!
Posted by Bonnie Kenaz-Mara at 5:20 PM