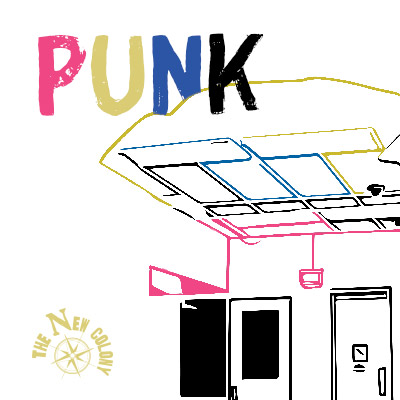 Review:
I spent yesterday, National Coming Out Day, contemplating PUNK. This show is a stark reminder that sometimes "coming out" as LGBTQ results in being kicked out of the house by homophobic parents, and youth having to live on the streets and sell themselves, sell drugs, or commit crimes just to survive. Even with an understanding family, coming out (or even suspicion), paints a target on many, who wish only to be true to themselves. And if they defend themselves during an assault or crime and get convicted, they're often revictimized and bullied by other inmates. It's a vicious and sometimes fatal cycle, by murder or suicide, and a huge way our present society lets LGBTQ people down. PUNK is thought provoking on many levels, with a witty script and quite a few laughs, despite the starkly industrial set and dark subject matter. Do note, this production contains mature themes and is best suited to adults or older teens. 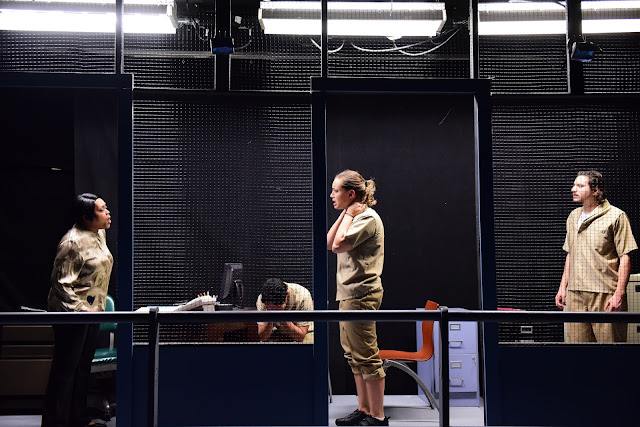 There are some hilariously memorable lines like "So, cosplay is like drag for those with disposable income?" and  "If your partner uses spit as lube they don't really love you." The idea of LGBTQ "family" who look out for each other, even in prison, is fabulous. The acting is energetic and excellent, and the set design quickly and cleverly converts scenes from cells, to the visitors' lounge, to office space seamlessly, with clever sliding beds and hidden doors. 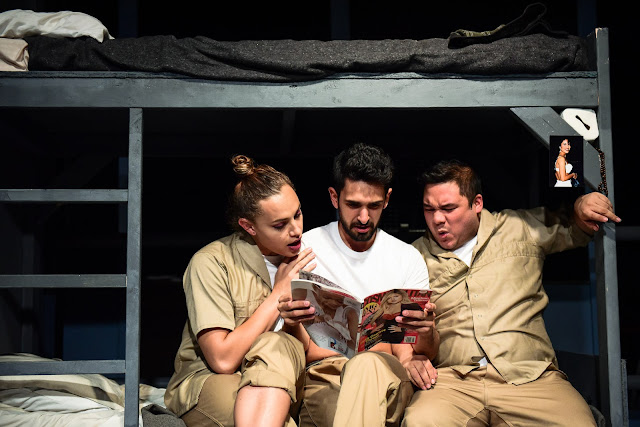 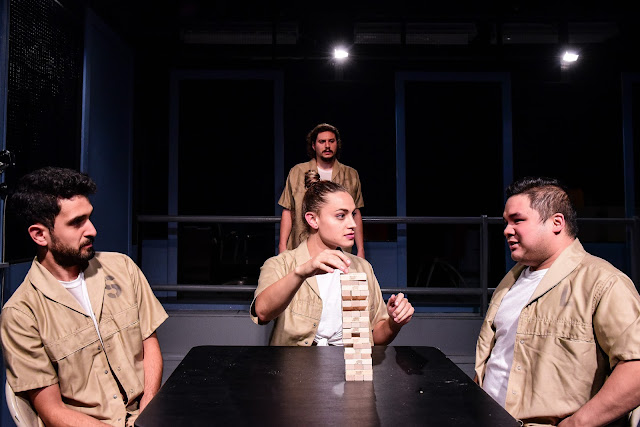 Most people don't really think about what happens to non gender binary people who are forced into a system ill prepared for their needs. I had a transexual housemate back in 1995, who was freshly out of rehab, and she had to fight all kinds of bureaucratic BS, with strong advocates, to get assigned to the women's ward instead of the men's, because her birth certificate read male. It was automatically assumed she had to go in the men's ward, though it was apparent she dressed as and identified as a woman and had breasts. It was a huge, uphill battle to get reassigned, despite a clear danger to her physical and mental well being, to try to get clean among male addicts likely to bully her at best and assault her at worst. Sadly enough, this is still an issue 20+ years later. With a Trump administration in charge, what little ground we gained in legislating protections and raising awareness and compassion is quickly being reversed and eroded, making theatre like this more crucial than ever. 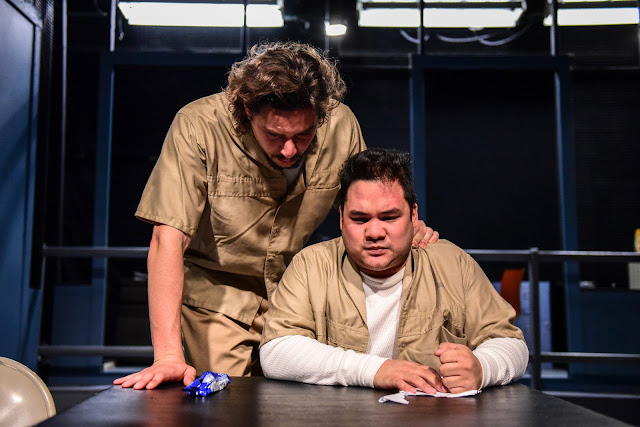 PUNK broaches many interesting angles, including the burnout and exhaustion faced by fierce advocates, who devote their lives to fighting for LGBTQ rights only to run up against roadblocks time after time. The victim as victimizer concept, that plays out in real life all too often, is explored, as well as the powerlessness to protect loved ones on the outside, or control the lives of those who come to visit or don't, at will. PUNK also shines a light on the horrific idea of rape and assault as punishment for crimes committed, and the equally horrific fact that it often takes suicide and violence for a bureaucratic system to back off on budget cuts and bad ideas. PUNK is thought provoking and wrenching, yet not heavy handed, or without humor and charm. It's well worth an evening out. 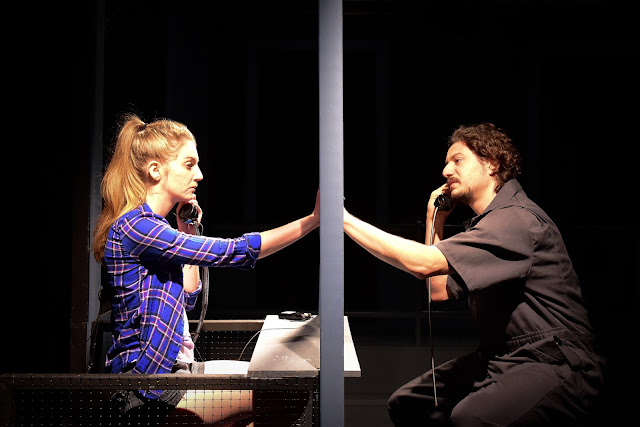 Set in a maximum-security prison in present day America, Punk is the story of a group of inmates who are protected and housed in a special unit for gay, bisexual and transgender inmates. Tensions rise when Travis, a young man sentenced to life in prison for the murder of a gay man, requests to transfer into the unit. Fear and suspicion hover over the inmates who call this unit home.

Michael Allen Harris (Playwright) As a playwright, Michael has collaborated with Chicago theatre companies such as Broken Nose Theatre, Jackalope Theatre, Arc Theatre, Stage 773, Fine Print Theatre, Chicago Home Theater Festival and The New Colony. His play, Rocky Road, received its world premiere at the New Studio Theatre of Columbia College Chicago in March of 2013. It was the first production featured in the Main Stage season that was authored by an alumnus. His play, The Velvet Tabernacle, was featured in a development series on behalf of Fine Print Theatre. His most recent play, Kingdom, is currently involved in a season-long development on behalf of Broken Nose Theatre and received its first stage reading at Victory Gardens Richard Christiansen Theater. In February 2016, he was part of The New Colony’s Writer’s Room and completed the first draft of his full-length play Ascension. His short plays include: House of Samurai, They Let Him Bleed, Project Agatha and The Woman Who Stared into the Eyes of The Red Horseman. As an actor, Michael worked with Adventure Stage, Eclipse Theatre, Gift Theatre, Teatro Vista, The-Massive, Stone Soup Theatre Project, Infusion Theatre, Broken Nose Theatre and Cold Basement Dramatics. He was nominated for a BTAA for his performance as Fortune in Eclipse Theatre’s Jeff-nominated production of Ruined. He is a proud ensemble member of Eclipse Theatre Company and proudly represented by Lily’s Talent.

Katrina Dion (Co-Director) works as a director and teaching artist in Chicago. At Free Street Theater (FST), Katrina acts as the Operations and Youth Program Manager. In this position, she leads the high school ensemble in a conservatory level year long critical thinking and creation process focusing on issues affecting Chicago youth while managing the companies grants and financials. Katrina is also on staff with Albany Park Theater Project (APTP) as their lead academic tutor. Last year, Katrina had the pleasure of working with APTP on Learning Curve as a Production Assistant. Most recently, she directed Los Milagros/The Miracles Project, Checkmate and The Americans at FST; co-directed Cycle 3 of Every 28 Hours at The Goodman Theater along with Coya Paz; Zipped and Pelted at the Chicago Fringe Festival; and Convention or The Winos with The Wulfden. She has had the pleasure of assisting directors such as Bonnie Metzgar, Coya Paz and Krissy Vanderwarker. Katrina received her BFA in Theatre Arts with a concentration in directing with a minor in Mathematics from DePaul University.


The New Colony develops NEW ART and NEW ARTISTS in order to educate and build NEW AUDIENCES. Founded in 2008, The New Colony has established itself as “one of Chicago’s essential off-Loop companies” (Chicago Tribune) having developed and produced over 25 world-premiere plays and musicals garnering four Joseph Jefferson Awards, the 2011 Broadway in Chicago Emerging Theatre Award, and Best Overall Production at the 2012 New York International Fringe Festival. The New Colony is a resident company of The Den Theatre located in Wicker Park.
Posted by Bonnie Kenaz-Mara at 5:46 PM