OPENING: World Premiere of Born Ready at The Factory Theater 3/17-4/29 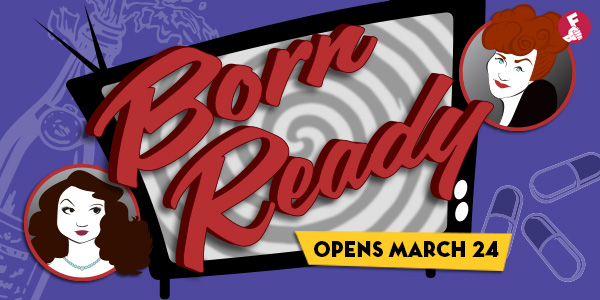 Regular performance times are Fridays and Saturdays at 8 p.m. and Sundays at 3 p.m. Ticket prices are $10 for preview performances and $25 for regular run. Tickets may be purchased through Box Office by calling 866.811.4111 or by visiting http://www.thefactorytheater.com.

Marion Kroft, an aging former child film actor turned variety show star in the 1950s, is desperate to get back into the public’s eye and show business. Harriet is a new young dancer who befriends Marion and the pair quickly becomes a smash comedy duo, but the truth behind their scenes may not be as funny.

About Stacie Barra, playwright
Stacie Barra is a Factory Theater ensemble member having performed in Factory’s GI’s in Europe, 1985 and Take the Cake. In addition to Factory, her area credits include work with Lifeline Theatre, The Milwaukee Repertory Theater, Stockyards' Theatre Project and Chemically Imbalanced Comedy to name a few.

About Wm. Bullion, director
Wm. Bullion is a Factory Theater ensemble member and has been a professional director in Chicago for over 25 years. His most recent full project was directing David Cerda’s masterpiece Scream, Queen Scream! with Hell in a Handbag Productions. Before joining The Factory ensemble in 2016, he was a member of Akvavit Theatre, directing its hit U.S. premiere of Andri Snær Magnason’s Blue Planet, the Midwest/Chicago premiere of Jon Fosse’s A Summer’s Day and created the original burlesque satire Pippi’s Lost Stockings: A Skirt Raiser. Bullion is director of programs with DirectorsLabChicago, an artist-service organization dedicated to emerging directors and is a graduate of UCLA’s school of Theater, Film and Television.

About The Factory Theater
For almost 25 years, The Factory has created its shows from scratch, doing exactly the kind of theater they wanted to do. From writing workshops to the closing night bash, Factory shows are a unique experience that fits its exacting standards: original, bold, and full-tilt. Its shameless ensemble are ambassadors of a good time, making certain that Chicago remains heartily entertained.

Posted by Bonnie Kenaz-Mara at 4:19 PM