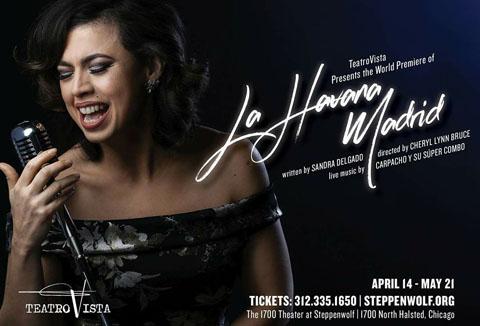 ChiIL Live Shows will be out for the press opening on Thursday, April 20th, so check back soon for our full review.
In addition to conceiving and writing La Havana Madrid, Delgado will play the title role of La Havana Madrid, a mystical woman who conjures vibrant songs and true stories in this immersive, documentary-style tale of La Havana Madrid, a popular 1960s melting pot for Caribbean Latino immigrants at the corner of Belmont and Sheffield in Chicago.

Legendary Colombian-American musician Roberto "Carpacho" Marin, joined by his band of 30 years, Carpacho y Su Super Combo, will perform live at every show. In fact, Carpacho's own story is one of the play's inspiring true vignettes.
With Delgado as lead singer, Carpacho y Su Super Combo will chronicle the history of Caribbean Latino music, live, from mambo to the birth of salsa.

Performances run through May 21: Thursday-Saturday at
8 p.m.; Sunday at 4 p.m.
Single tickets are $15-$45, and go on sale February 3. Regular tickets are $35 (all previews and weekdays during the regular run) and $45 (Saturdays and Sundays). Student rush tickets are $15. Seniors 62+ and military tickets are $20. Steppenwolf Red and Black Card holders may use their cards as per Steppenwolf policies. For
tickets and information, visit Steppenwolf.org, TeatroVista.org or call (312) 335-1650. 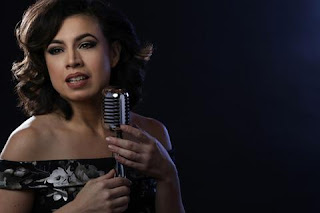 Behind the scenes of La Havana Madrid

"La Havana Madrid is about recapturing a lost chapter in Chicago history, and as a born and bred Chicagoan, this play is my love letter to the city I cherish," said Delgado, a Colombian-American actor, writer, and producer, well-known to Chicago audiences.

In the late 1950s and throughout the 1960s, Latinos from Caribbean countries such as Puerto Rico and Cuba settled all along Chicago's lakefront, from North Avenue to Devon.

Although from different countries, music brought them together. Their shared rhythms -  African rhythms - became the guaguanco, the mambo and the merengue. Now in the United States, these rhythms merged with traditional big band sounds and eventually became salsa.

On the North side of Chicago, a handful of Latino music clubs opened up: Coco Loco on Lincoln Avenue, The Mirror Lounge on North Avenue and La Havana Madrid on Belmont and Sheffield. While the history of La Havana Madrid may be fuzzy, what is known is Cubans opened it in the early 1960s and the club became a busy melting pot for newly arrived Latinos in Chicago. It's believed La Havana Madrid closed in the mid-1970s.

In addition to support from The Chicago Community Trust, Delgado received a 2015 Joyce Award and a 3Arts 3AP Project Grant to support the development of La Havana Madrid. She developed the script as a member of the 2015-16 Playwright's Unit at Goodman Theatre.

Teatro Vista founded in 1990 by Edward Torres and Henry Godinez. As Teatro Vista's first Artistic Director, Godinez guided the company during the formative years. He helped stage successful productions and establish vital relationships with other theatre companies and artists. When Godinez stepped down, Torres was appointed Artistic Director. Under Torres' direction, Teatro Vista used the stage to engage, connect and challenge audience members using the company's mission as his guide. In 2012, Torres moved to New York and the Board of Directors promoted longtime Associate Artistic Director Ricardo Gutiérrez to the position of Executive Artistic Director.