REVIEW: Porchlight's In The Heights Intimate and Excellent

IN THE HEIGHTS
NOW EXTENDED THROUGH OCTOBER 23
AT STAGE 773 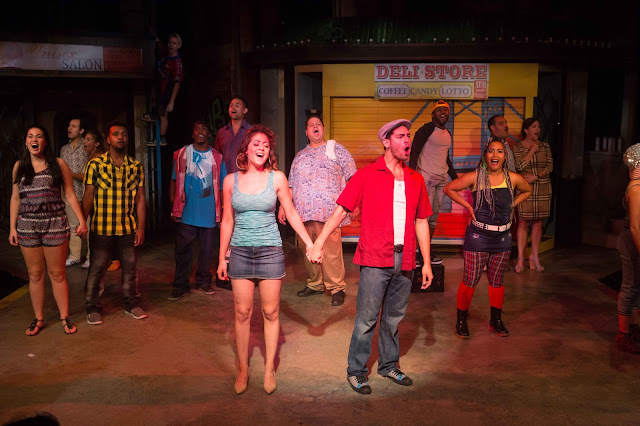 Chicago's got Lin-Manuel Miranda on the brain... and rightfully so. His work is brilliant! Tickets to Porchlight Music Theatre's In The Heights are selling out fast, but still available, and they won't break the bank like a certain historical hip-hop hit opening imminently at The PrivateBank Theatre. Here at ChiIL Live Shows we had the pleasure of catching the press opening of Porchlight's In The Heights and we can attest that this production makes for an excellently entertaining night out. Highly recommended.

Amid all the Hamilton mania, Porchlight Music Theatre has launched a stellar choice for a season opener, the multi-Tony Award-winning In The Heights, with music and lyrics by Lin-Manuel Miranda!

You won't even have to break out a sleeping bag and wait all night in line for tickets. We do suggest you book in advance though. Porchlight is a perennial favorite and many dates are sold out or filling fast! 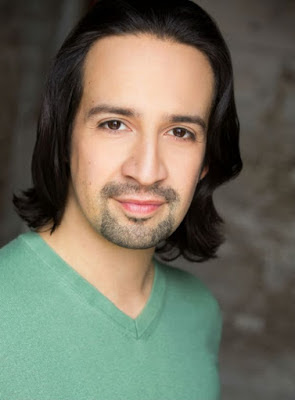 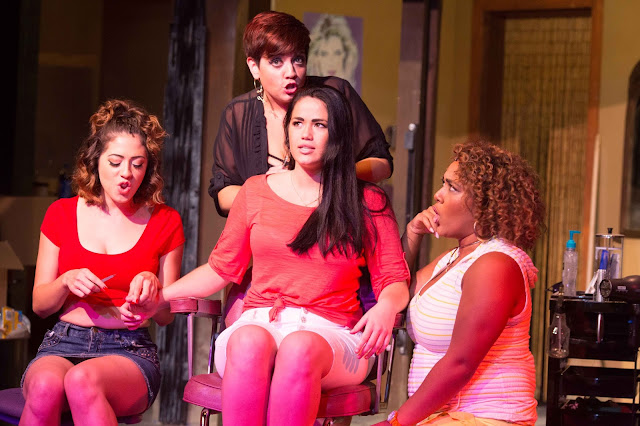 The women ruled the neighborhood and the show! We're completely enamored with Isabel Quintero's Abuela Claudia and the power vocals and charisma of the female leads. Lucia Godinez (Nina Rosario) and Michelle Lauto (Vanessa) were particular standouts. 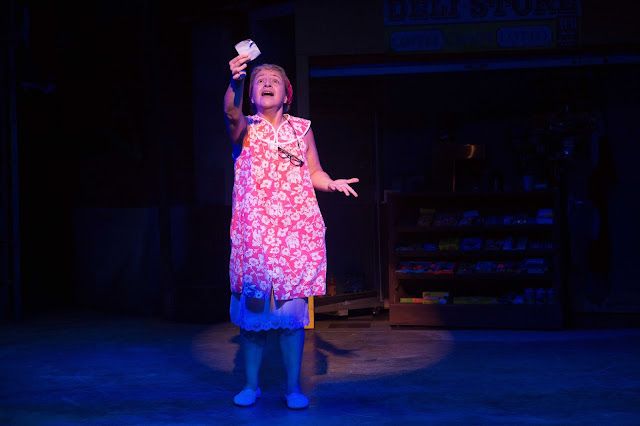 We caught the Broadway touring cast of In The Heights when they played Chicago a few years back, and they had nothing on Porchlight. The intimate space at Stage 773 lends a personal feel to this production that's nearly impossible to emulate in a giant theatre. In The Heights, with it's focus on community, family and relationships amid grinding New York poverty is well suited for a smaller audience. The set design is fun, and makes great use of multilevel spaces. 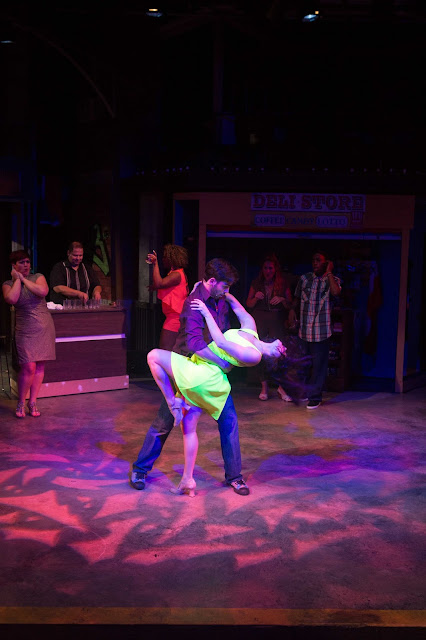 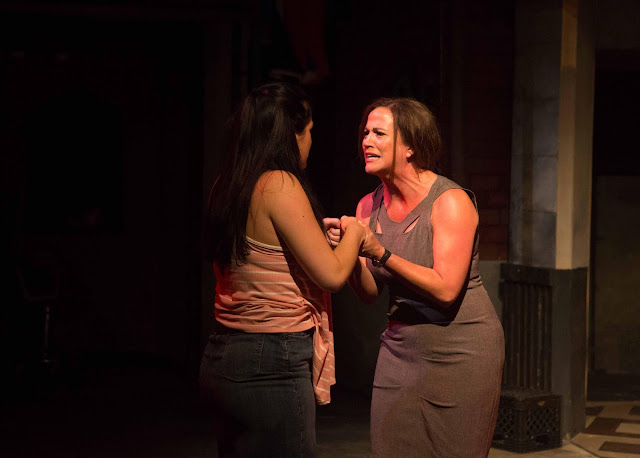 
Porchlight has gotten some flack for casting white Italian, Jack DeCesare, as Usnavi, who is supposed to be from the Dominican Republic, but we found his performance to be endearing. Many Chicago companies have long been open minded about casting the best actor for a part, regardless of skin color or racial background. Audiences accept and even expect a cast of many colors, even in "white" classics like A Christmas Carol and much of Shakespeare's body of works. Limiting roles to an exact ethnic match with a script is unrealistic and unnecessary. It's a valuable debate to have, but acting is just that... pretending to be someone else, and we thoroughly enjoyed Jack DeCesare's portrayal of Usnavi. 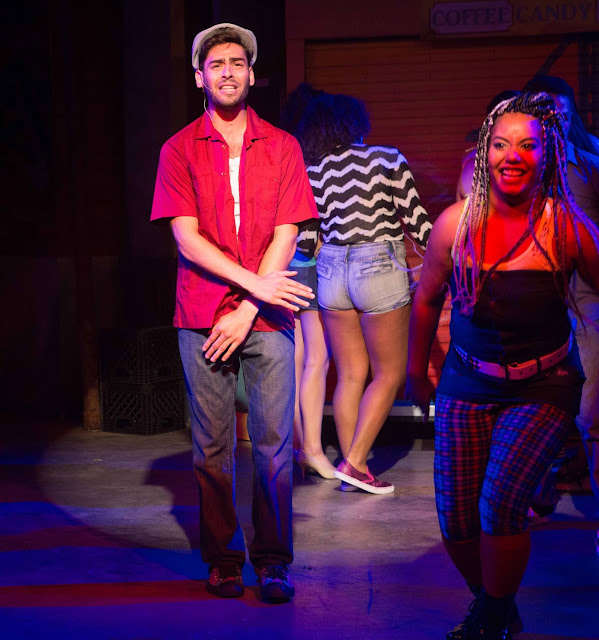 Porchlight's In The Heights features a diverse cast and celebrates the multicultural melting pot that is urban America. The tragedies, triumphs, love and loss of this community make for great theatre. The score is irresistible and Porchlight's energetic and enthusiastic production is a must see. 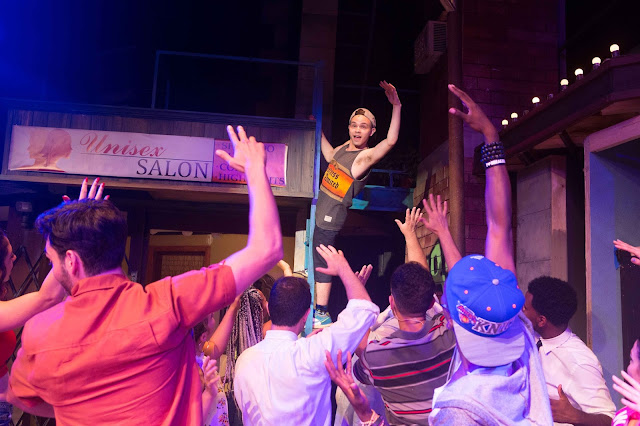 Subscriptions to the entire Mainstage season or Porchlight’s series, Porchlight Revisits, are currently on sale as well as single tickets for the entire season.  Subscriptions are available at PorchlightMusicTheatre.org or by calling 773.777.9884. Groups of ten or more may receive discounts on tickets purchased via Group Theater Tix at 312.423.6612 or grouptheatertix.com.

From the creator of the current Broadway juggernaut Hamilton, and winner of Tony Awards for “Best Musical” and “Best Original Score,” In The Heights tells the universal story of a tight-knit community in New York’s Washington Heights neighborhood—a place where the windows are always open and the breeze carries the rhythm of three generations of music. It’s a community on the brink of change, full of hopes and dreams, where the biggest struggles can be deciding which traditions you take with you, and which ones you leave behind. 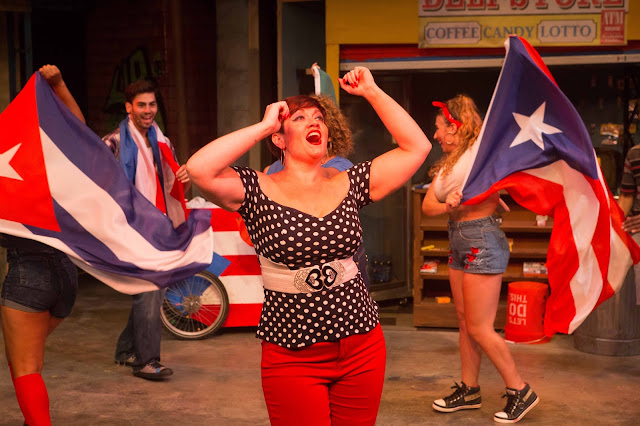 ABOUT QUIARA ALEGRÍA HUDES, Book
Quiara Alegría Hudes is the author of a trilogy of plays including Elliot, A Soldier’s Fugue (a 2007 Pulitzer finalist); Water by the Spoonful (winner of the 2012 Pulitzer Prize for Drama); and The Happiest Song Plays Last, which premiered at The Goodman Theatre in April 2013 and is now playing Off-Broadway in New York. Hudes wrote the book for the Broadway musical In The Heights, which received the 2008 Tony Award for Best Musical, a Tony nomination for Best Book of a Musical, and was a 2009 Pulitzer Prize finalist. In its original Off-Broadway incarnation In The Heights received the Lucille Lortel and Outer Critics Circle Awards for Best Musical. Hudes’ honors include a United States Artists Fontanals Fellowship, the Aetna New Voices Fellowship at Hartford Stage Company, a Joyce Foundation Award, a residency at New Dramatists, and a resolution from the City of Philadelphia. Hudes sits on the Dramatists Guild Council and serves on the board of Philadelphia Young Playwrights, which produced her first play in the tenth grade. She lives in New York with her husband, daughter and son.

ABOUT BRENDA DIDER, director and co- choreographer
Brenda Didier, recently named one of the “major musical theater forces” working in the Chicago area, is a multi-award-winning director/choreographer having received Joseph Jefferson Awards for both direction and choreography, After Dark Awards for choreography, the National Youth Theatre Award for choreography and the 2010 Broadway World Chicago Fan Favorite Award for choreography. Didier has collaborated with Porchlight Music Theatre on eleven productions, including the recently Jeff Award-nominated Dreamgirls, Ain't Misbehavin' (Jeff Award Best Production and Direction) and A Funny Thing Happened on the Way to the Forum as well as How To Succeed in Business Without Really Trying, Pal Joey, Putting It Together, Ragtime and Once on this Island, all of which earned her Jeff nominations. Her additional credits include work with Chicago Shakespeare Theatre, Goodman Theatre, Second City mainstage and etc., Mercury Theater Chicago, Cirque Shanghai, Theo Ubique Cabaret Theatre, Bailiwick Chicago, BoHo Theatre, City Lit, Silk Road Rising, House of Blues, Leo Burnett Worldwide and many industrials and special events. Didier is the owner and director of the Lincolnshire Academy of Dance where her students have completed programs with American Ballet Theatre, the Joffrey Ballet Milwaukee Ballet, Boston Ballet, Ballet Austin, The Rock School, River North, Giordano and Hubbard Street summer intensives. She is most proud of her scholarship program, including the Matt Gunnels scholarship, to help struggling families keep their children in dance classes. 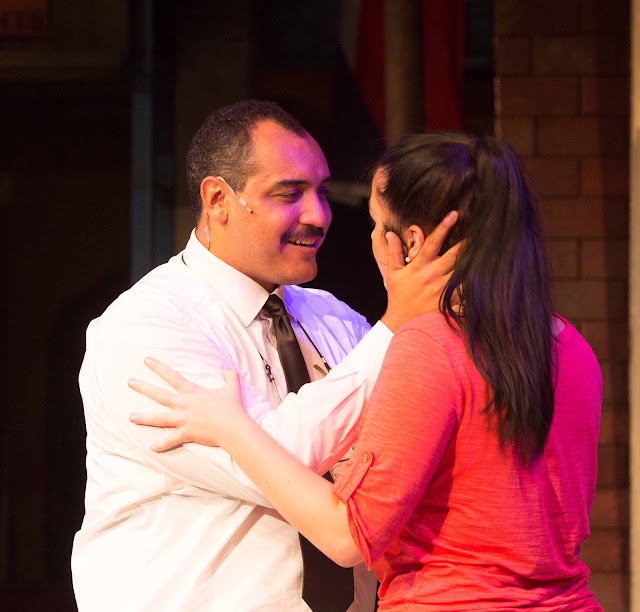 ABOUT PORCHLIGHT MUSIC THEATRE
Porchlight Music Theatre, now in its 22nd season, is nationally recognized for developing innovative new works, reimagining classic productions and showcasing musical theatre’s noted veterans and rising stars. Porchlight elevates the genre in Chicago by providing intimate and powerful theatrical experiences for its growing and diverse audiences. With the vision of Artistic Director Michael Weber, Porchlight builds on its role as Chicago’s only Equity not-for-profit company exclusively specializing in music theatre. Porchlight’s rich history includes the staging of more than 60 productions with 15 Chicago premieres and five world premieres. Through Porchlight’s “Off the Porch” new works program, the musicals of the next generation are developed and given a first audience. The School at Porchlight is Chicago’s new center for music theatre training in the areas of performance, writing and appreciation. The company’s many accolades include 15 Black Theatre Alliance nominations and two awards, as well as a total of 126 Joseph Jefferson Award nominations resulting in 35 Jeff Awards including three consecutive Best Production awards for Sondheim on Sondheim (2015), Ain’t Misbehavin’ (2014) and A Class Act (2013) as well as Sondheim on Sondheim being named one of the Chicago Tribune’s “Best Theatre of 2015.”